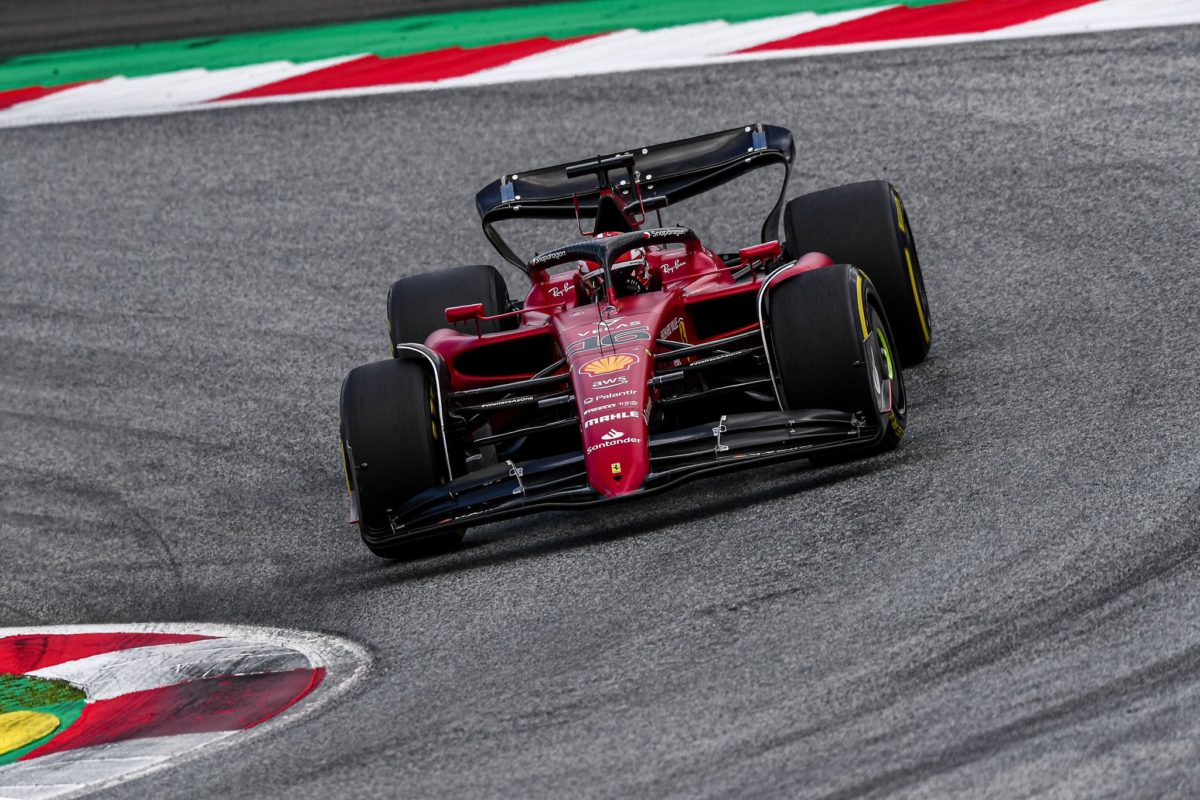 Charles Leclerc has held on despite late dramas with his Ferrari to win the Formula 1 Austrian Grand Prix from Max Verstappen.

A throttle pedal issue created a nervous run to the flag, Leclerc reaching the chequered flag just 1.8 seconds ahead of his Red Bull rival.

Verstappen shot into a clear lead as the race began, while George Russell moved up to third behind Leclerc.

Having fallen to fourth, Sainz battled back on the run to Turn 3, reclaiming the place to leave Russell vulnerable to Sergio Perez.

The pair ran around Turn 4 side-by-side, contact between them sending the Red Bull into the gravel.

Perez was able to haul the car out, immediately pitting for a set of hard tyres on his wounded RB18.

The incident was noticed by the officials, though no investigation was immediately announced.

Out front, Verstappen held a 0.9s advantage over Leclerc, the Ferrari in DRS range as it was enabled on Lap 3.

Daniel Ricciardo had initially climbed to ninth at the start, though soon fell back behind his McLaren team-mate once more.

On Lap 8, Leclerc showed his nose at Turn 3, though Verstappen didn’t feel the need to cover the move.

It was the closest the Ferrari had been since the race start, beginning Lap 8 just 0.4s off the back of the Red Bull.

Still, he wasn’t close enough to make a move into Turn 3 despite the advantage of DRS.

A lap later, he was closer and drew alongside under braking at the top of the hill.

Verstappen opened the steering, affording his rival space, but held the advantage as they accelerated out of the corner.

Two laps later, an opportunistic move at Turn 4 saw the lead stolen away.

As that happened, Russell took to the pits for a replacement front wing, serving a five-second penalty for his part in the Perez incident, at the same time.

On Lap 14, Verstappen stopped to swap the medium tyres for the hards, the Dutchman emerging behind Lando Norris in a net eighth place.

He quickly climbed back to third, though his progress was slowed somewhat by Hamilton who was unwilling to simply allow the Red Bull through, despite being in different phases of the motor race.

It was a brief interlude, Verstappen through to third on Lap 18 at Turn 4.

Out front, Leclerc held a 3.6s advantage over Sainz, who was in turn 19.7s ahead of Verstappen.

It was an awkward gap, leaving the championship leader on the fringes of Leclerc’s pit window and seemingly forcing the Scuderia to opt for a one-stop strategy, or risk having to pass Verstappen on track.

Strategic options were seemingly further narrowed by the strong pace the pole sitter enjoyed, closing to 12.7s back from Sainz on Lap 23.

They somehow all made it through Turn 3, despite running three-wide, with no contact throughout the quintet which strung out again soon after.

At the head of the race, Leclerc pitted on Lap 26, doing so as Perez pulled into the lane to retire.

The Monegasque emerged in third, with 12 laps newer tyres than Verstappen in what as a confident move from Ferrari.

They were together on Lap 33, the lead changing hands without argument at Turn 3.

Track limits were proving an issue, Pierre Gasly having picked up a five-second penalty, as too did Norris.

The McLaren driver sat eighth at the time, holding a narrow advantage over Russell with Ricciardo in 10th.

On Lap 37, Verstappen stopped for a second time, taking on another set of the hard compound tyres.

Initially told to manage his pace, the Red Bull pit wall then freed the championship leader to push on.

He duly did so, lapping the better part of a second faster that Leclerc out front.

On Lap 40, Sebastian Vettel spun at Turn 4 after contact with Gasly, the pair battling over 12th place.

The incident attracted a five-second penalty for Gasly, consistent with what was metered out to Russell earlier in the race.

Norris pitted for a second time on Lap 45, taking his five-second penalty before a fresh set of hard tyres were fitted and he rejoined in 14th.

His team-mate was in next time around, a 2.8s stationary time feeding him back out in 14th, just behind Norris.

Leclerc stopped for a second time on Lap 50, again taking the hard tyres as he rejoined behind Verstappen, though again with a significant tyre advantage.

It was then Sainz’s turn, the Spaniard feeding out behind his team-mate, forcing both Ferrari’s to overtake the leading Red Bull if they were to reclaimed their previous positions.

Leclerc made short work of Verstappen, quickly catching and passing him on Lap 53 to take the lead and quickly pull away.

Verstappen had defended into Turn 3, but in doing so was compromised exiting the corner, Leclerc able to cut back and get better drive to take the place.

Soon after, it was Sainz’s turn, though just as he was set to mount his challenge the power unit let go.

He pulled off at Turn 4, flames quickly taking hold of the car, while the Virtual Safety Car was thrown to allow officials to douse and recover the Ferrari.

Leclerc and Verstappen both pitted for the medium tyres, while Hamilton moved up to third and Esteban Ocon fourth.

The Virtual Safety Car was withdrawn on Lap 58, Leclerc holding a 4.2s advantage, Hamilton more than 26s further back in third.

Further back, Russell had climbed back to fourth, passing Ocon, while Schumacher sat sixth ahead of Magnussen, Norris, Ricciardo, and Alex Albon.

The race at the front was condensing, Verstappen circulating some 0.3s a lap faster than Leclerc ahead.

However, with a 3.6s deficit, and seven laps remaining, the Dutchman looked set to run out of time, while Leclerc was able to react and stabilise the gap, despite reporting a problem with his throttle pedal.

Conversations over the radio suggested the pedal was not always retracting when he lifted his foot, leaving him to manually pull it back on occasion.

With four laps remaining, the gap between the two leaders was 2.7s, though Verstappen was not making strong inroads.

The Dutchman began the final lap with a 2.2s deficit, and while he eased that it, it wasn’t enough as Leclerc won with a 1.8s margin with Hamilton a distant third.

Russell was fourth ahead of Ocon, the top 10 completed by Schumacher, Norris, Magnussen, Ricciardo, and Alonso.

Verstappen continues to lead the championship, which heads next to Paul Ricard for the French Grand Prix on July 22-24.