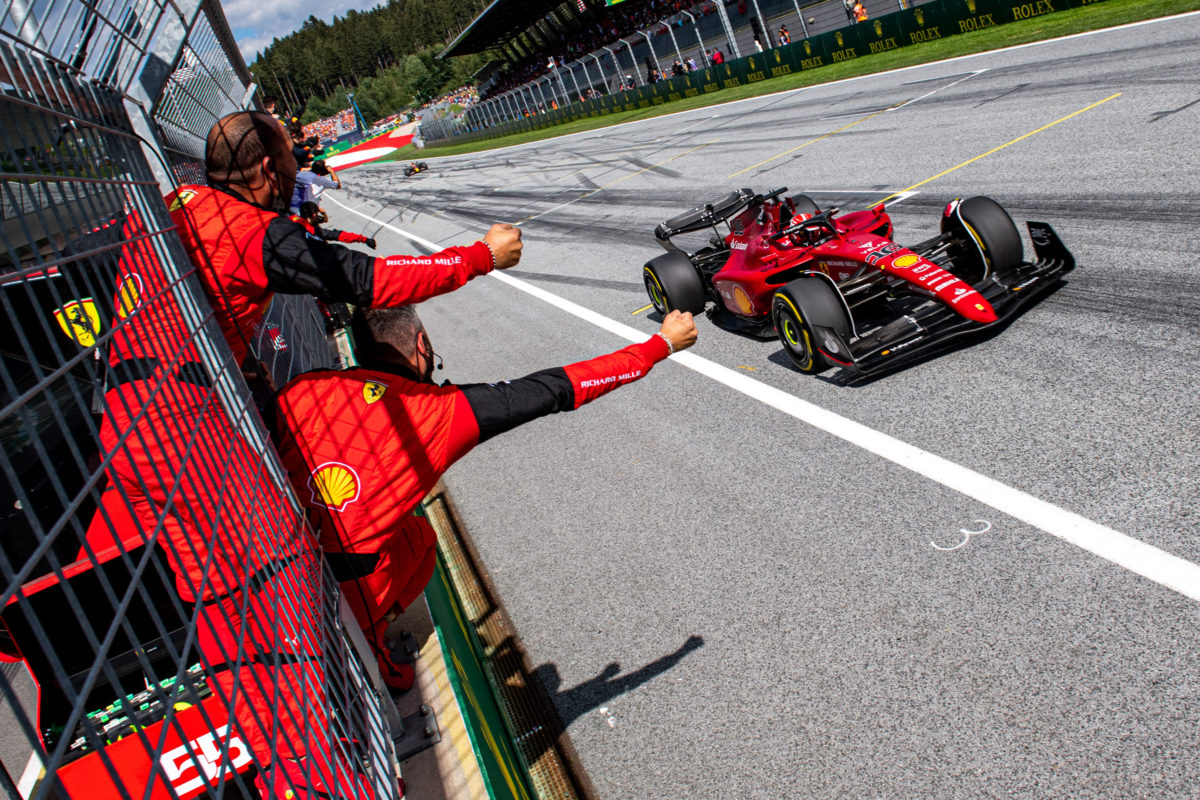 A problem with the throttle pedal in the latter stages of the Formula 1 Austrian Grand Prix made for a stressful conclusion to the race for Charles Leclerc.

The Ferrari driver won the race from Max Verstappen, his third win of the season, after a strong performance from the Scuderia.

Starting second, Leclerc raced his way into the lead in the opening stint, before using an offset strategy to repass Verstappen later to confirm the victory.

However, in the final laps a problem with the throttle pedal threatened to derail his hopes.

“Only a little bit stressful! Very stressful,” he conceded when asked about the pressure he was under in the closing stages.

“The throttle was really inconsistent and in the middle of the corner, it will get stuck to whatever percentage.

“So, in Turn 3, it was very, very tricky because that’s where you don’t want any more speed in mid-corner.

“It was quite tricky to manage, not so much in the high speed, but mostly in the slow speed.

“At the end, we managed to get the car to the end, which is great.”

Leclerc enjoyed strong pace in Sunday’s race, allowing him to chase down Verstappen and pass the Red Bull driver for the lead – something he was unable to do during Saturday’s Sprint session.

He then had to repeat the task later on when Ferrari pitted him out of sequence to the championship leader, costing him track position.

It was a confident strategy from the Maranello pit wall which leveraged both the tyre advantage Leclerc had at the time, but also the inherent pace of the F1-75 and its ability to pass the Red Bull on track.

However, the Monegasque driver is at a loss as to where the additional pace came from in Sunday’s grand prix.

“We’ve been working quite a lot on my driving yesterday night and I knew that I had a bit more based on the medium,” he explained.

“But yeah, it was a surprise to do that much of a step forward, so we will have to analyse well to understand that.”

The result marked Leclerc’s first win since the Australian Grand Prix seven races ago and comes at a time when Red Bull threatened to begin walking away with the championship.

However, it was not all plain sailing for Ferrari as Carlos Sainz was forced out with an apparent power unit issue.

The Spaniard was shaping up for a move on Verstappen for second approaching Turn 4 on Lap 57 when his car bellowed smoke and eventually ignited.

“It was not an ideal and easy situation for sure,” Sainz said of his retirement.

“I didn’t want to leave the car completely free, out of control, rolling backwards while jumping out, he added.

“I was calling the marshals to come and help me to put something on the tyres to stop the car rolling down, but I think the whole process was a bit slow and, at some point, there was so much fire that I had to really get a move on and jump out independently.

“It was just at that time that the first marshal arrived and stopped the car, so it’s definitely something we need to look at, what we could have done a bit faster, because it was not an easy situation to be in.”

According to team boss Mattia Binotto, early indications are the failure was “mechanical,” though the full picture wouldn’t be clear until a full analysis of the car was competed.

“We need to confirm,” he said.

“For what I heard, it’s only initial feedback, it’s more a mechanical one we got, but I cannot give you more details than that.”

It’s led Binotto to previously confess that there are concerns surrounding reliability.

“I think we’ve got only two engine failures so far, the others were, the power unit, more than two, but in terms of internal combustion engine, two,” the Italian explained on Sunday evening.

“Obviously, we need to look what happened today, is it the same we had already, the one in Baku with Charles.

“It’s certainly a concern, but the people back at Maranello are working very hard to fix them, which is not solved yet.

“And obviously they’re look at what happened to Carlos, it’s not been solved yet, but we’ll have new elements and I know how strong they are working, how good they are.

“I can count on them that it will be addressed very soon.”

While power unit development is frozen under the regulations, changes can be made in the interests of reliability.

Formula 1 returns with the French Grand Prix at Paul Ricard on July 22-24.