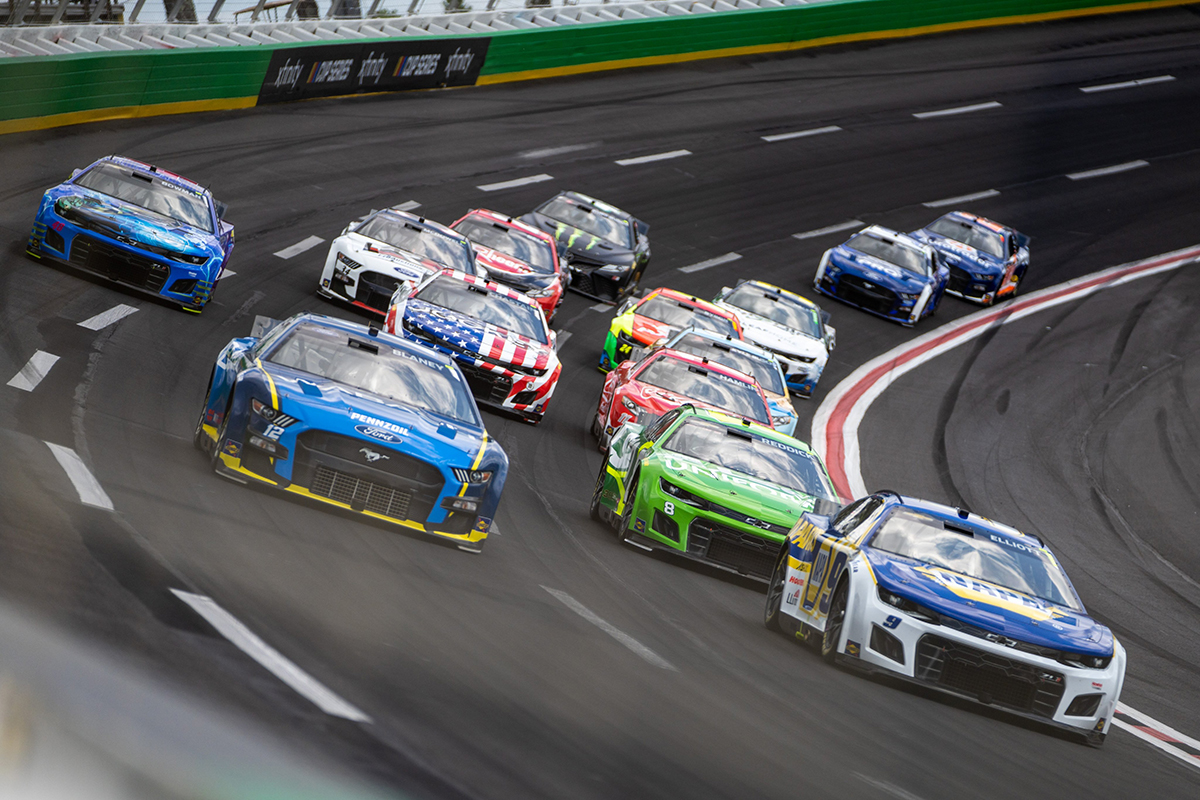 Chase Elliott has claimed his third win of the NASCAR season and completed a clean sweep at his home track of Atlanta Motor Speedway in an “unbelievable” finish.

For the second time in its history, Atlanta Motor Speedway hosted a ‘Superspeedway style’ race with the new package taking to the 1.5 mile track.

Elliott lined up on pole, and took the Stage 1 win with Hendrick team-mates Alex Bowman and William Byron also claiming top five finishes at the end of the stage.

Halfway through Stage 2 saw the first major incident of the day, with Ross Chastain spinning Martin Truex Jnr’s #19 car, which collected six other drivers, including a frustrated Austin Dillon.

“Looks like we were just a casualty of Ross Chastain once again,” Austin Dillon said.

“I told myself we were gonna race hard all day, I didn’t want to ride in the back, but when you got guys like him wrecking half the field you might as well take a different strategy, but the racing is a lot of fun, the cars were hard to drive especially in the heat.”

The crash saw Joey Logano’s Penske car get airborne after clipping the back of Truex’s car, but both drivers were able to continue racing.

Elliott took the win in Stage 2 under caution after his team-mate Bowman cut a tyre and spun in Turn 4.

With under 100 laps remaining, Rick Ware Racing driver Garrett Smithley got loose in front of the field, and was tagged by Ty Dillon.

The incident collected another eight cars, including contenders Byron and Tyler Reddick.

Christopher Bell’s run was spoiled with just over 30 laps remaining, as he spun off Turn 4 and brought out the caution.

Bell’s day went from bad to worse as his pit crew made a mistake on pit road, releasing the car before the left-rear tyre was fully on.

Joe Gibbs Racing and 23XI Racing swapped crew’s for Bubba Wallace and Bell, meaning Wallace’s pit crew, who had been guilty of a number of pit lane mistakes this year were now on Bell’s car.

Meanwhile, Chastain became involved in another wreck with rival Denny Hamlin in a four-car crash.

The two came together four weeks ago at the Gateway, but Hamlin has become even more frustrated with Chastain in his breakout year.

With the laps winding down, Corey LaJoie painted himself as the underdog to take the chequered flag.

LaJoie led 19 laps throughout the day, the most in a single race in his Cup Series career, as the Spire Motorsports driver lined up on the front row for the restart with three laps to go.

On the final lap of the race, Elliott blocked a big run coming from LaJoie’s #7 car, and he went into the outside wall and spun into Kurt Busch.

“That’s the closest I’ve ever been [to a win], that was fun, I’m just super proud of my guys at Spire,” LaJoie said.

“I made my move, it didn’t work out when he blocked, and the siren’s ringing at Dawsonville unfortunately.”

Elliott picked up his 16th Cup Series win, the first at his home track.

“This one is up there for sure, to win at your home track is a really big deal, I’ve watched a lot of guys do it over the years… just so proud.

“What a car, I’m not sure we’ve had a Speedway car that good, if we had I probably wrecked it.

“What a few weeks it’s been, I feel like I gave one away last week, and to come back and put on a performance like that, I’m really proud of that.”

NASCAR continues its countdown to the playoffs, with just seven races remaining in the regular season.

The series heads to New Hampshire next weekend, where Aric Almirola will be looking to repeat last year’s upset victory.