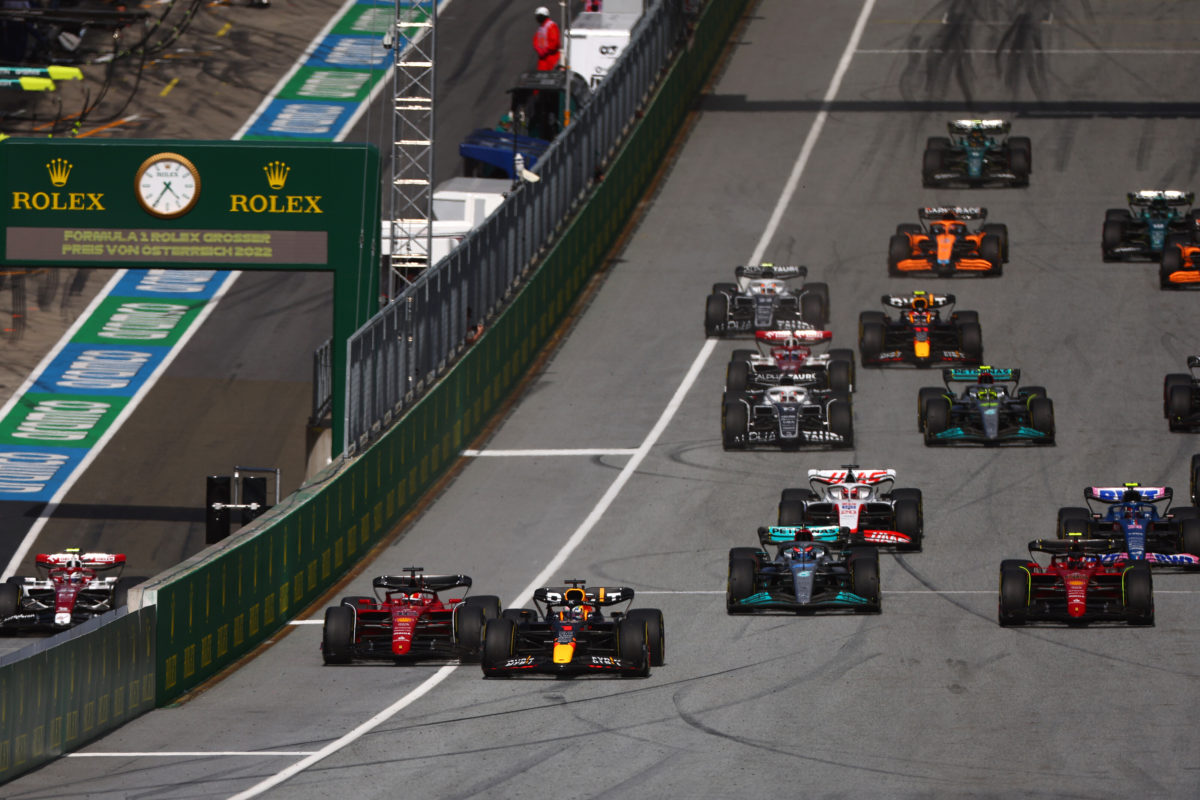 Max Verstappen has eased to a narrow but comfortable victory in the Formula 1 Austrian Grand Prix Sprint.

Leading from the start, he headed every lap to finish 1.6s ahead of Charles Leclerc with Carlos Sainz third, enshrining his position at the front of the grid for Sunday’s grand prix.

It proved an entertaining encounter, with enthralling scraps in the back, least of all a three-way dice between Kevin Magnussen, Mick Schumacher, and Lewis Hamilton that lasted for much of the 23-lap outing.

The initial start was aborted when Guanyu Zhou lost power on approach to the grid at the end of the formation lap.

While the Alfa Romeo Sauber was able to get going as the field pulled away, rules necessitated a pit lane start for the Chinese driver.

His fortunes were still better than those of Fernando Alonso, the Spaniard stranded on jacks as Alpine ran out of time while working on an issue on the grid.

He was left there as the field headed off on its initial formation lap before being pushed into the lane where he retired without taking the start.

From the off, Verstappen immediately looked to cover Leclerc, opening the door for Sainz around the outside while there was contact further back.

Using the slipstream, Sainz then attacked for the lead into Turn 3, serving only to open the door for Leclerc, the Ferraris reversing position once more at Turn 4.

Pierre Gasly was the victim at the opening corner, moving left on approach where he made wheel-to-wheel contact with Lewis Hamilton, launching and spinning the Scuderia AlphaTauri.

Verstappen headed the pack at the end of the opening lap from Leclerc, Sainz, George Russell, and Esteban Ocon.

Sergio Perez was an early mover, climbing from 13th to eighth in the opening laps, aided by those around him having issues.

His Red Bull team-mate was stretching his legs out front, enjoying a 2.3s advantage after five laps.

Behind him, Leclerc had his mirrors filled by Sainz, the pair coming close to making contact at Turn 3 on Lap 6.

A lap later, the Spaniard was forced to back out of a move around the outside at Turn 4, their squabble doing little more than allowing Verstappen to extend his advantage.

An aggressive defence from Alex Albon in the early stages on the advances of Lando Norris earned the Williams driver a five-second penalty.

Norris had been forced wide at Turn 3 as they battled for 11th, though his efforts were short lived as he soon fell behind both McLarens.

Perez’s progress continued with a fine, opportunistic move on Schumacher at Turn 3 on Lap 9, using DRS to take Magnussen at the same place a lap later to climb to sixth.

Albon’s eventful race continued when he made contact with Sebastian Vettel, the Aston Martin spinning into the weeds.

Though the German was able to get going, he’d fallen to 19th and well off the back of the pack.

At mid-distance, Leclerc had dropped Sainz and was beginning to gain on Verstappen, the gap having reduced to 2.5s between the front two.

In the pack, and enthralling battle developed between the two Haas drivers and Hamilton, the Brit harrying the rear of Schumacher’s car for eighth.

The German was seemingly impervious to those attacks, placing his car well to offer the pursuing Mercedes little hope.

Schumacher’s saving grace was the DRS from Magnussen ahead, allowing him to remain tantalising out of reach of his pursuer.

Eventually he dropped out of range, Hamilton eventually making the move stick on the drag from Turn 3 to Turn 4 on Lap 21.

Out front, Verstappen remained unchallenged to ease to the chequered flag by 1.6s, the Red Bull driver managing the encounter such that he was never troubled by Leclerc who claimed second.

However, while he finished 10th, Bottas will fall to the rear of the grid for Sunday’s race owing to a power unit change earlier in the weekend.

As such, Norris will take the place, with Ricciardo to start 11th.

However, he and Schumacher were both set to be investigated for a starting grid infringement.