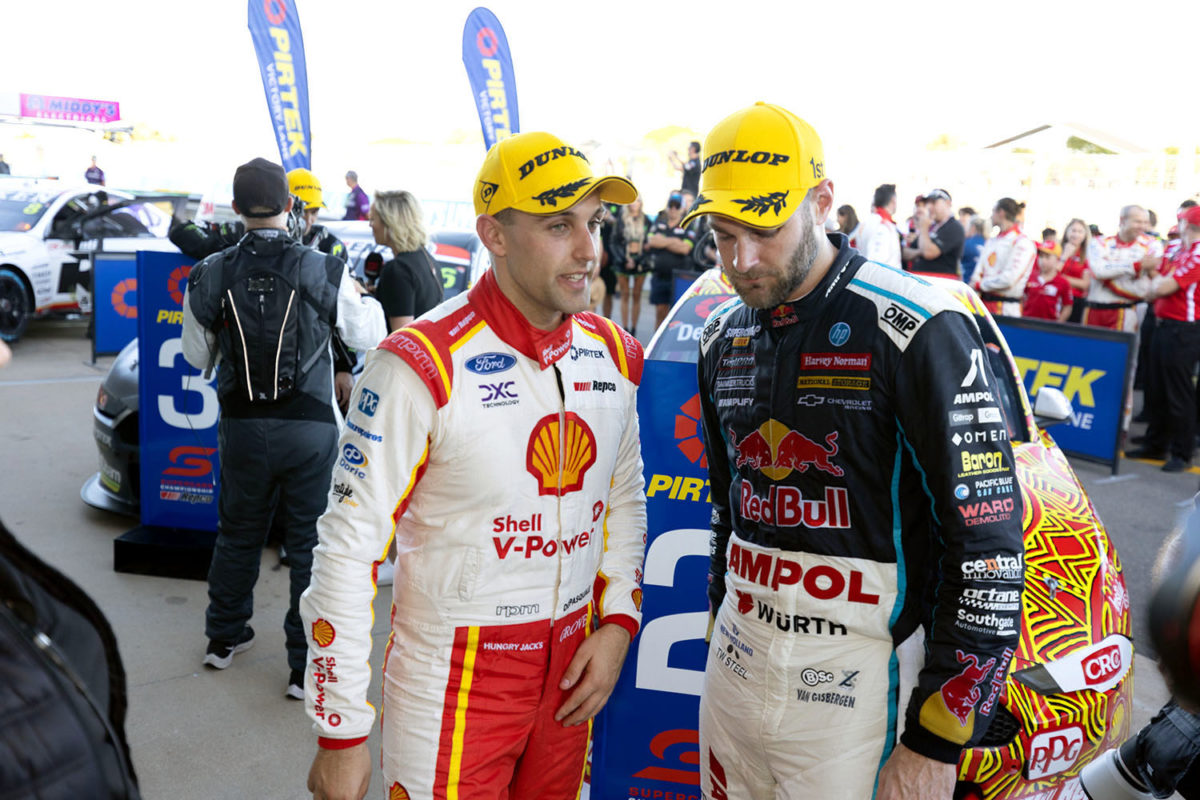 Shane van Gisbergen was hoping Anton De Pasquale would be given a bigger penalty when he refused to accept a redress after their late incident at the NTI Townsville 500.

De Pasquale had a dive at the Red Bull Ampol Racing driver in a bid to snatch victory in Race 20 of the Repco Supercars Championship, but pinched a brake and turned Car #97 around.

He then slowed his Shell V-Power Racing Team Mustang as he ran along Boundary Street in the race lead, only for van Gisbergen to also ease off the throttle and follow Car #11 across the finish line.

De Pasquale was thus penalised, although only to the tune of five seconds after stewards deemed he had committed an act of Careless Driving.

With Cameron Waters crossing the line 6.6s behind the guilty party, the sanction only had the effect of restoring the positions to how they had been before the contact.

Van Gisbergen was initially coy when queried about why he did not take the redress, simply responding “Dunno”.

Then asked specifically if he hoped for a bigger penalty, he replied, “Yeah, I probably thought that at the time.”

De Pasquale said he had “no concern” about what had played out.

De Pasquale also confirmed he was satisfied that the outcome was fair, and did not expect to get away unpunished when the redress offer was not taken.

“Obviously, I spun him and he was leading the race, so he deserves to win,” he remarked.

“I tried to give him a position back [but if] he doesn’t want to take it, that’s on him, but I’m not going to start inventing rules.

“The results I think, as we sit here, is sort of what it deserves to be for today’s race, so it all works out.”

“I was angry at the time and I wanted to celebrate with my guys,” recalled the New Zealander.

“Then after the interviews, I went and saw him and said pretty much what I said to Jess [Yates, broadcast interview].

“I don’t mind that he had to go, I’m angry that I got spun out but I’m happy we’re having a battle and I’ve got no problem with that.

“Maybe he could have done it better but I was angry.”

Asked if he owed De Pasquale some payback, van Gisbergen stated, “No, I don’t think like that.”

De Pasquale also confirmed that the two drivers are “good” after their talk.

They remain the top two in the drivers’ championship, with van Gisbergen now 274 points to the good ahead with seven events down and six to go.

Next is the OTR SuperSprint at The Bend on July 29-31.