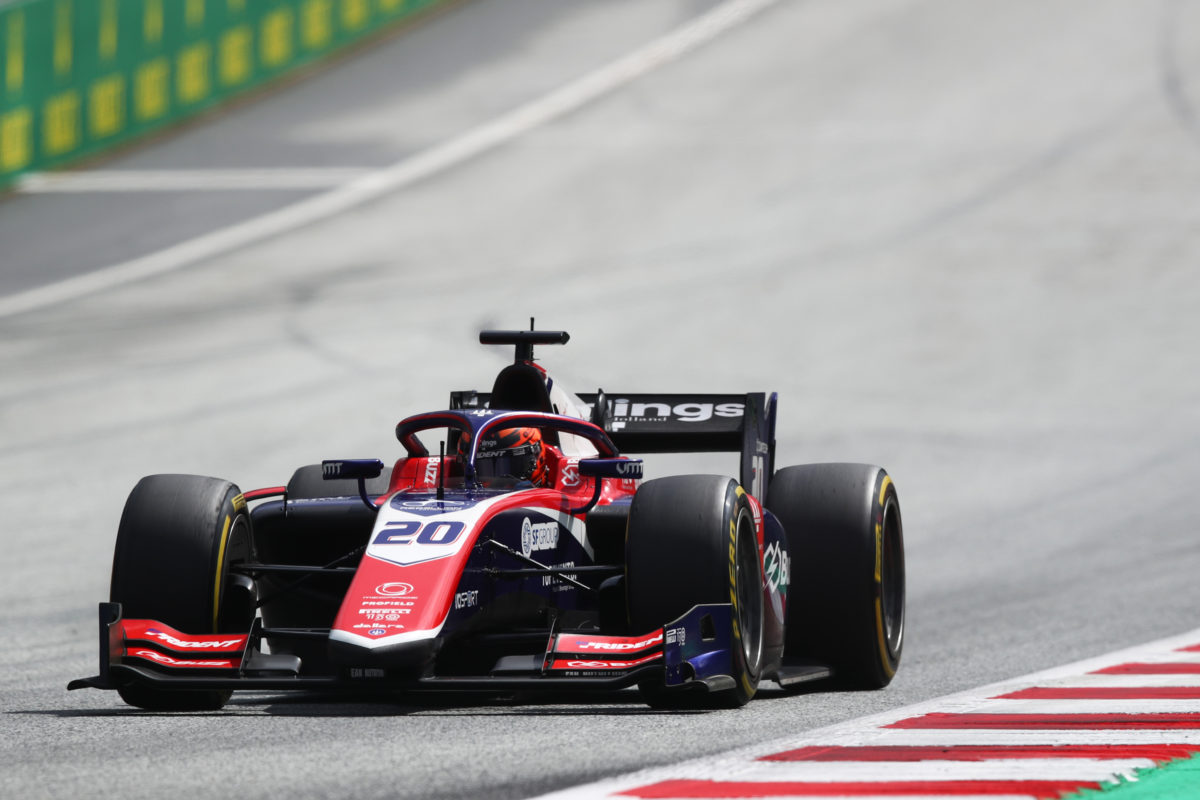 Richard Verschoor has won the Formula 2 Feature race in Austria after a gamble on slick tyres at the start paid off.

Damp conditions greeted drivers on the grid but quickly dried in the opening laps to leave those on wets tyres vulnerable.

Having started on slicks, Verschoor soon carved his way through the field in the opening laps before going on to dominate the race.

The front three rows of the grid took the start on full wets, Verschoor the first on slicks out of eighth.

The Australian found himself demoted another spot at the penultimate corner on the opening lap, Logan Sargeant going around the outside in a brave move in slippery conditions.

He immediately closed on Iwasa, who’d dropped back behind Vesti.

The Safety Car was called to cover off Marcus Armstrong, the New Zealander having stopped at Turn 3 on the opening lap.

He’d run wide initially before being tagged as he attempted to rejoin with the field pouring around the right-hander to leave him nosing into the barrier and unable to continue.

The interruption came too early for drivers to serve their compulsory stop, though Amaury Cordeel still took the opportunity to swap onto slicks in the fast improving conditions.

Racing resumed at the start of Lap 5, the field weaving its way down the front straight hunting for wet patches to cool their tyres.

At Turn 3, Doohan slipped back another spot after Theo Pourchaire moved up the inside of the Virtuosi driver to claimed fifth.

The needle had by then already shifted in favouyr of the dry weather tyres, with the likes of Verschoor making strong progress through the field while others, such as Doohan and Felipe Drugovich, began to plummet down the order on the wets.

Verschoor moved into the lead on the approach to Turn 4 on Lap 7, Jehan Daruvala rising to second soon after having also started on slick rubber.

Predictably, the pits became a hive of activity as those on wets looked to switch into the dry weather tyres.

Such was the drama in the opening laps, Roberto Merhi climbed from 20th on the grid to third as the opening stops took place.

It effectively divided the field in half; those who’d started on slicks running at the front but yet to stop versus those who opted initially for the wets who’d stopped and were now desperately working to close the gap and gain track position later in the race.

The second wave of stops began on Lap 13 when Daruvala stopped, others following suit on Lap 14 , though race leader Verschoor stayed out a lap longer.

He rejoined with a comfortable 4.8s advantage over Daruvala with Merhi in third.

Once proceedings has settled back down, Doohan found himself just 16th, his race unravelling further after picking up a five-second penalty for track limits.

He then slipped to 17th as countryman Calan Williams found a way through at Turn 3.

Out front, Verschoor proved untouchable, extending a sizeable gap to Daruvala through the middle part of the race.

With five laps remaining, Doohan pitted and had a set of supersoft tyres bolted on, serving his five-second penalty in the process.

It also dropped him a lap behind the leaders, filtering back in behind third placed Merhi.

Track limit violations were proving significant, with a raft of drivers picking up time penalties.

Vesti, Iwasa, Liam Lawson, and Williams were all pinged for running wide on four occasions, though the consistency of the decisions was questioned.

The battle for second intensified in the final laps, Merhi harassing Daruvala’s gearbox.

On the penultimate lap, he forced Daruvala defensive into Turn 3 before getting better drive off the corner to seize second into Turn 4.

The joy was short-lived, however, as the Spaniard was handed a five-second penalty for track limits, which would see him tumble down the order at the chequered flag.

Clear of such dramas, Verschoor won comfortable from Merhi on the road, though in reality it was Daruvala second and Sargeant third.

Merhi fell to fifth once his penalty was applied while Doohan ended the race as last of the runners, and with fastest lap to his name.

Formula 2 returns in support of the Formula 1 French Grand Prix on July 22-24.