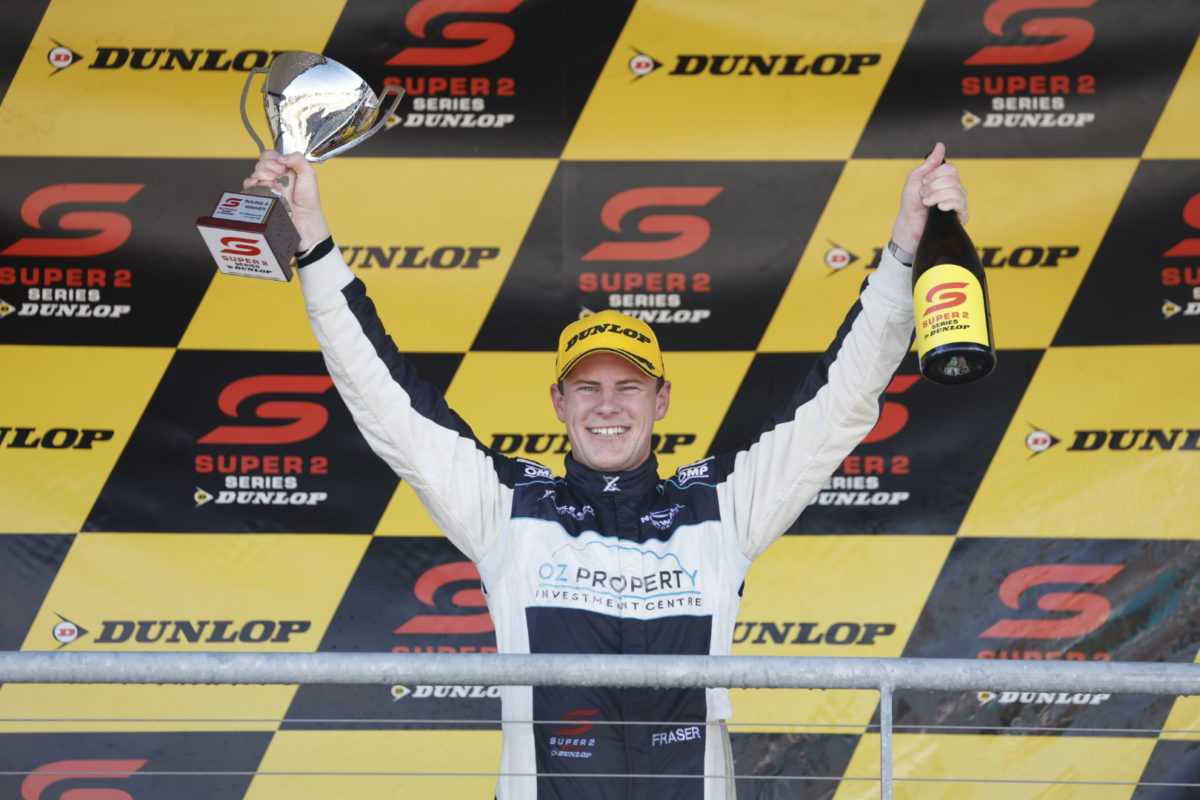 Triple Eight Race Engineering’s Declan Fraser has scored his first Dunlop Super2 Series race win in a carnage-filled finale to Round 3 at the NTI Townsville 500.

The second-year Super2 driver led all 18 laps of Race 2, many of which were run under Safety Car, while Matt Chahda held off the other Triple Eight car of Cameron Hill to clinch second position by a margin of 0.0844s.

Fraser thus moves to the top of the points table after an unfortunate Tyler Everingham crashed into pre-round series leader Matt Payne at the start.

The eventual race winner had shown a fairly clean pair of heels from pole position but Everingham made an even better start just behind him on Row 2.

So good was the MW Motorsport driver’s getaway, he tried to drive around Fraser (#777 VF Commodore) but clashed with Tickford Racing’s Zak Best (#78 FGX Falcon), who was relatively slow away from the front row, which sent him spearing across to drivers’ left.

Everingham’s #27 Nissan Altima collected the #10 Grove Racing Nissan Altima of Payne, taking both into the wall and drawing an early Safety Car.

Best was involved in another crunch moments later at Turn 4, when he shunted the #999 Image Racing VF Commodore after Jaylyn Robotham had slowed in response to the yellow flags.

Officials would take no further action over either of those incidents but the hit which Robotham copped damaged his bootlid and left his rear wing bent back, causing him to pit just as the field was about to take the restart at the end of Lap 4.

However, the Tickford driver in that quintet was in trouble when the right-front guard on Car #78 peeled back once he got up to speed again, giving Hill an easy pass under brakes when they arrived at Turn 2. Tyler Everingham finds the fence at the start of Race 2. Picture: Ross Gibb

Fraser had shaken Chahda and the privateer was coming under pressure from the other Triple Eight driver in the field, Hill having a dive at Turn 2 on Lap 8 but pinching a brake and running long.

Chahda thus retained second spot, and would get a further reprieve when a second Safety Car period was called due to an ugly tangle between Cameron Crick (#38 Eggleston Motorsport VF Commodore) and Nash Morris (#67 Flash Bush Motorsport FGX Falcon) which put both into the barriers at Turn 6.

The running order then was Fraser, Chahda, Hill, Hanson, Maxwell, and Seton, with Mouzouris back in ninth after a tap from Tim Blanchard (#54 Eggleston VF Commodore) had sent him through the grass at Turn 7 a few laps earlier.

The next restart came on Lap 15 and while Hanson kicked up the dirt exiting Turn 6 on cold tyres, he managed to stave off Maxwell at the following corner.

Fraser cleared out to a 2.4s lead at the start of Lap 18, which would be the final lap despite the extension of time-certainty by five minutes.

He went on to win by an official margin of 2.5692s but the battle for the minor placings was far closer.

Chahda fought hard to keep Hill behind him but was vulnerable for the drag up Boundary Street when he went defensive at the last corner of the race.

In the end, the privateer had just enough traction to beat the #111 Triple Eight entry to the finish line, while Hanson got home in fourth and Maxwell in fifth.

Ryal Harris (#58 MSR VF Commodore) put on some bold passes to climb to sixth by the chequered flag, ahead of Mouzouris, Seton, Blanchard, and Zane Morse (#11 Brema Group VF Commodore).

Kai Allen (#26 Eggleston VE Commodore) prevailed in Super3 in 11th outright, after what was a wild, three-way battle for class honours with Brad Vaughan and Blake Fardell.

Fardell (#77 Mr HDT VE Commodore) finished a position behind Allen on the road and in class, while Vaughan ended up seventh in Super3 and 18th outright after a late spin at Turn 6, and Best was the second-last of 23 finishers.

Round 4 of the Super2 Series supports the Penrite Oil Sandown SuperSprint at Sandown International Motor Raceway on August 19-21.