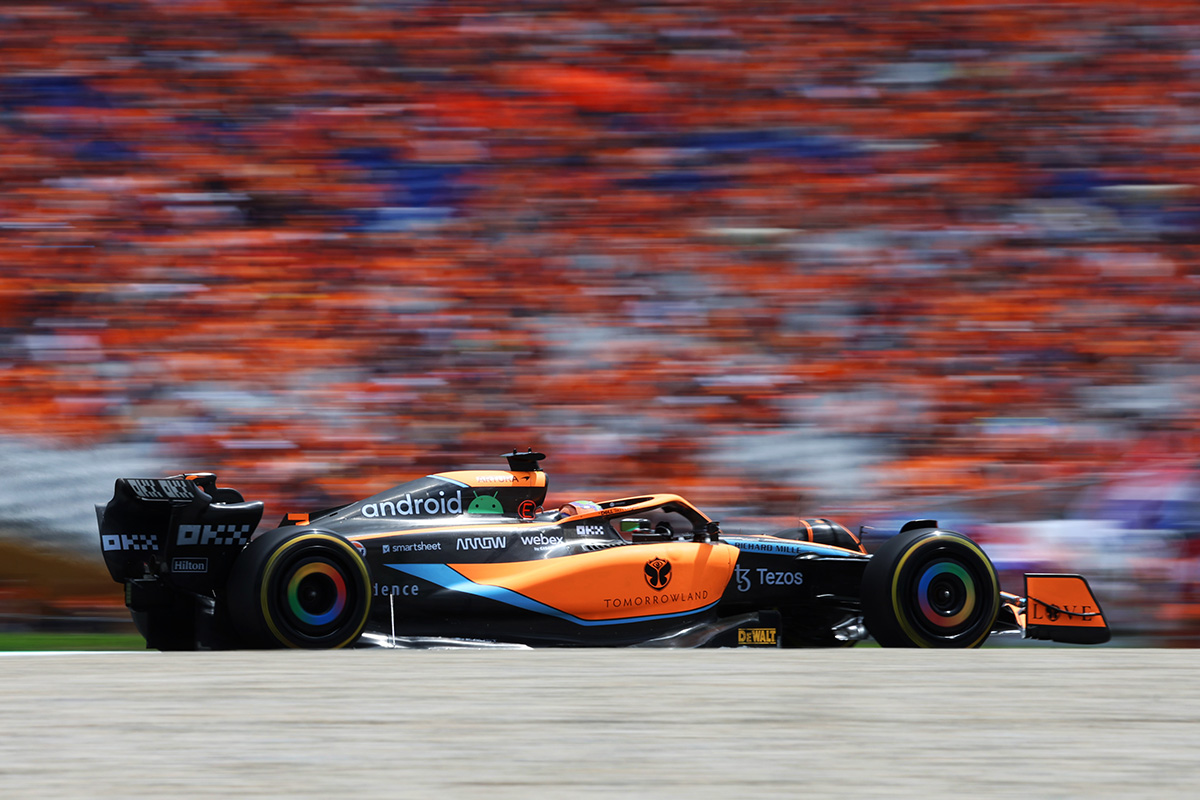 Daniel Ricciardo was left with a reason to smile after rising to 12th in the Formula 1 Austrian Grand Prix Sprint.

Both he and McLaren team-mate Lando Norris climbed four places from their starting position in the 23-lap affair as they bounced back from a troubled Friday at the Red Bull Ring.

“We went forward, so certainly there’s a reason to smile,” the Australian said.

“I will say that we couldn’t go too much further backwards from where we started, so there was only one way, but at least we did go forwards and we made a few spots.

“We’re still obviously fighting the car and whatnot, but we seem to still be able to make an impression on some of the cars in front.

“Maybe with a couple more laps we could have really been in the battle with, I think the Haas and the Alfa maybe was the car in front.

“Still some work to do tonight, but I think we can go to bed a little more encouraged than yesterday evening.”

Friday had been little short of disastrous for the team with Norris suffering issues that necessitated a power unit change ahead of qualifying.

Ricciardo’s running was compromised by a faulty DRS mechanism, which took much of Free Practice 1 to resolve.

Saturday morning was trouble-free and offered a glimpse of improved pace before the McLaren pair ran locked together throughout the Sprint, Ricciardo even asking to be let by in the closing laps.

In reality there was little point.

Valtteri Bottas in 10th was already set to drop to last on the grid for Sunday’s race owing to a power unit change earlier in the weekend, and therefore offered no incentive to attack.

Though he caught Mick Schumacher in the closing laps, the chances of Ricciardo clearing both Bottas and the Haas were slim, making the pit wall’s decision to leave the cars as they were a prudent decision.

“I started behind him [Norris] so we kind of stayed there,” Ricciardo said.

“Once the race kind of opened up, we were told to hold position, like not fight and just see basically if we could stay with the pack.

“Obviously the more I was behind him, the more then the conversation started ‘alright, I think I’ve got more pace, can we fight or at least swap positions and see what I’ve got?’

“I kind of just tried to also be honest and say, you know, I can definitely go quicker into high speed [corners] because that’s where you really suffer when you’re following another car.

“So I was quite clear I could be quicker in the second sector and I felt the low speed I was a bit more competitive.

“But, in the end, we didn’t [swap places]. We’ll have a look tonight, see if we missed something or if it was the right thing to do.

Following the Sprint, Ricciardo was one of seven drivers called to the stewards for an alleged breach of radio rules, though was subsequently cleared of any wrongdoing.

He will line up 11th owing to Bottas’ penalty, with Norris to start out of 10th.