Van Gisbergen runs down Davison to win Race 19 in Townsville

Van Gisbergen runs down Davison to win Race 19 in Townsville 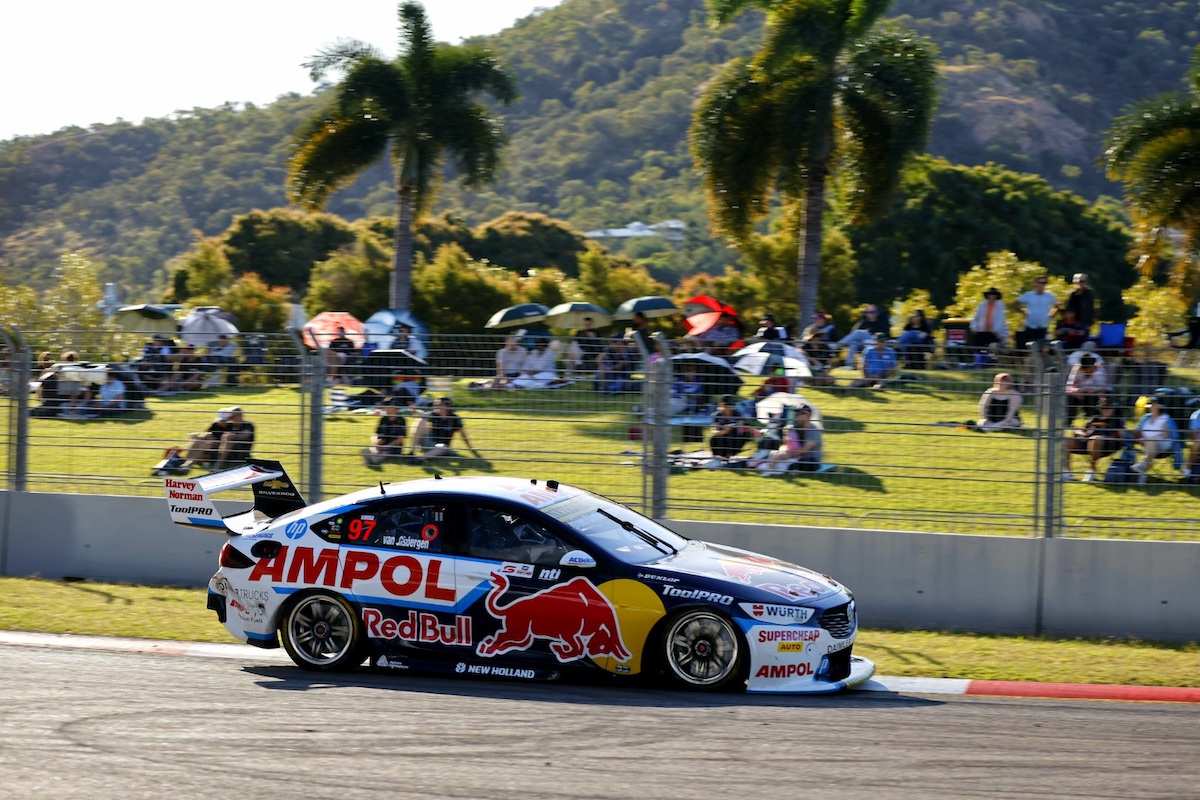 Shane van Gisbergen has run down Will Davison to win Race 19 of the Repco Supercars Championship at the NTI Townsville 500.

In a race of contrasting strategies with respect to both tyres and fuel, van Gisbergen employed the standard hard-hard-super soft progression but a large first fill put him deep in the top 10 during the middle stint of the 88-lapper.

The Red Bull Ampol Racing driver then started to come back before passing Davison at the end of the fifth-last lap, and he went on to beat the #17 Shell V-Power Racing team entry by 5.1967s.

It was a result for the New Zealander which came despite his concerns about a right-hand down steering wheel in his first stint, and strategy in the second.

“That was a great race, real team strategy there,” said van Gisbergen.

“I thought we put ourselves a bit too far back in the middle but came home strong at the end and a good little battle with Will.

“His lines were awesome and he was driving really well. It’s going to be tough tomorrow for sure.”

Van Gisbergen had qualified on pole but he was bested by Davison when the lights went out and the #17 Mustang took a clear lead over the #97 ZB Commodore to the Turn 1 kink.

Van Gisbergen held Waters at bay and he in turn kept Heimgartner behind him as they turned into the parklands section while Tim Slade (#3 CoolDrive Mustang), first of those who started on super soft tyres, had already jumped from ninth on the grid to fifth.

Davison was out to a 1.5s lead at the end of the standing lap, by which time Slade had already passed Heimgartner and then Waters to sit third.

He was second once he went down the inside of van Gisbergen on Lap 2, then picked off Davison on Lap 6 and moved to a lead of more than one second on lap 7.

David Reynolds (#26 Penrite Mustang) was also marching through the field on super soft rubber, going by van Gisbergen for third on Lap 8 and Davison for second on Lap 10, at which point Car #3 was 3.3s clear in first position.

Van Gisbergen, meanwhile, was catching up to Davison and went underneath the #17 Mustang on Lap 14 at Turn 2, to be back up to third spot.

Bryce Fullwood (#14 Middy’s ZB Commodore), the third and final soft tyre starter, passed Waters for fifth on Lap 16, shortly before Slade stretched his margin over Reynolds to six seconds, as he continued to gap the hard-shod runners also.

Chaz Mostert (#25 Mobil 1 Optus ZB Commodore) had made a genuine pass on fellow hard tyre starter Heimgartner in the early stages to be running seventh when he stopped on Lap 24.

Reynolds pitted from an 11-second deficit relative to Slade on Lap 27 to switch to hard tyres, and Slade was in on Lap 29 for a set of hard tyres and 75 litres of fuel out of his minimum 140-litre aggregate fill.

By then, van Gisbergen had been making up ground before he pitted on Lap 31 and took 101 litres of fuel.

When the first pit cycle was done on Lap 32, Slade led Reynolds by more than seven seconds, with Todd Hazelwood (#35 Truck Assist Mustang) third having made an early change from hards to super softs.

Davison was fourth, from Mostert, Anton De Pasquale (#11 Shell V-Power Mustang), Heimgartner, and van Gisbergen, with the top 10 rounded out by Waters and Fullwood.

Hazelwood briefly got up to second spot before he started to run out of rubber, meaning Davison, Mostert, and Reynolds assumed the positions second through fourth.

Heimgartner passed De Pasquale for sixth on Lap 40 at Turn 11, making room for van Gisbergen to follow him through.

They soon got by Hazelwood and had caught Reynolds before van Gisbergen prised fifth off his compatriot in Car #8 on Lap 44 at Turn 13.

Both cleared Reynolds next time through, as Davison continued to make time on Slade.

He was only half a second behind Car #3 at the completion of Lap 51 but, more importantly, had just over 13 seconds on van Gisbergen, covering the fuel discrepancy after #17 had only taken 60 litres at its first stop.

When Davison did pit again at the end of Lap 55, he was a bit under 13 seconds to the good relative to van Gisbergen, who assumed second position given Mostert had already been into the lane for his second stop.

Heimgartner pitted a second time to get onto his set of soft tyres on Lap 58 but van Gisbergen pressed on to Lap 64 before he did so.

That gave Davison the lead from Fullwood, who had only completed one stop at that point, then Mostert and Slade.

Van Gisbergen resumed in fifth and was more than 17 seconds behind Davison once he was up to speed.

After 74 laps, Davison’s margin over Mostert had grown beyond six seconds, but van Gisbergen had brought his deficit relative to the leader back under 10 seconds.

Van Gisbergen caught Mostert less than two laps later, making an easy move on the Walkinshaw Andretti United driver into Turn 11, having also reduced the gap to Davison to 7.8s.

With 10 laps to go, the margin was 6.1s, and van Gisbergen had almost halved it to 3.3s after three laps more.

Despite the potential for lapped traffic to give Davison a brief reprieve on Lap 84, van Gisbergen latched onto the rear of the #17 Mustang at the back end of the parklands section.

It was a matter of power down as they exited Turn 13, van Gisbergen getting much better traction and blazing past.

That was the end of the battle for victory, but the final step of the podium was highly contested.

Mostert lost third place to Heimgartner on Lap 82, then fourth position to a resurgent Waters on Lap 83.

When Waters made a dive at Heimgartner at the Turn 11 right-hander on Lap 87, he barely pulled up the #6 Mustang but held on well enough to complete the pass at the Turn 13 left-hander.

Mostert faded all the way to ninth having gone early onto super softs for his final stint, with Jack Le Brocq (#34 Truck Assist Mustang) rounding out the top 10 after starting sixth.

All 25 drivers finished, but Winterbottom ended up last classified, at 19 laps down, after a recurrence of power steering problems for Team 18.

The field is back on-track tomorrow for Qualifying for Race 20 at 10:10 local time/AEST, followed by a Top 10 Shootout later in the day.