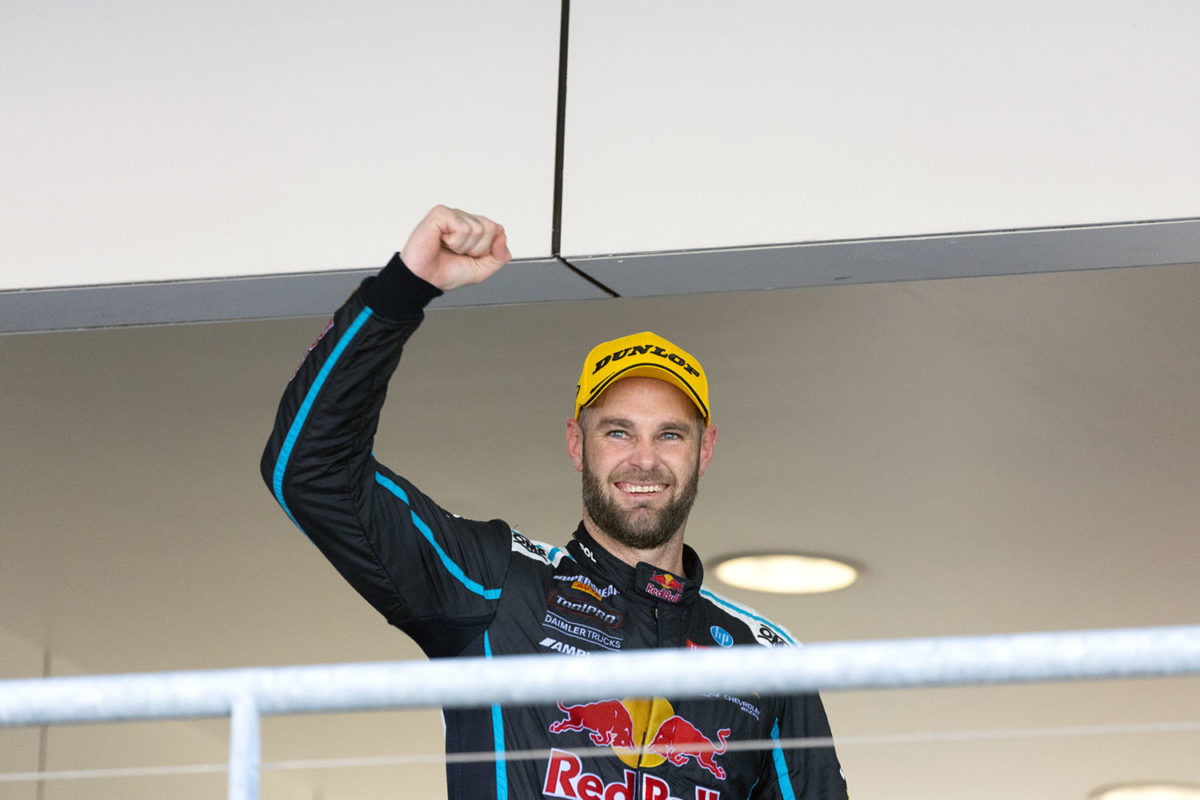 Shane van Gisbergen says he hit his target for overhauling Will Davison ‘perfectly’ as he won Race 19 of the Repco Supercars Championship at the NTI Townsville 500.

The Red Bull Ampol Racing driver pitted for a second time with 24 laps to go in the 88-lapper at the Reid Park Street Circuit, and was in fifth position at almost 18 seconds behind then-leader Davison once he came up to speed again.

Bryce Fullwood soon took his final stop and Tim Slade was fairly easy pickings given he was finishing on hard compound tyres whereas everyone else around him was on super softs.

However, van Gisbergen had already slashed his out-lap deficit relative to Davison by more than half when he passed Chaz Mostert for second spot with 12 laps, or half of that final stint, to go.

On Lap 84, he caught the #17 Shell V-Power Racing Team entry and had far too much traction for the Mustang when they drove off Turn 13.

According to the championship leader, who was updated on the splits by engineer Andrew Edwards every lap, that was almost exactly his plan.

“They just told me what lap time to do, so I came out, they said, ‘It’s 18 seconds,’ or something, stupid amount,” he recalled.

“But then I just wanted to know Will’s lap time every lap and I just drove to be eight tenths [faster].

Van Gisbergen had fallen to eighth when he took on a very sizeable haul of approximately 100 litres of fuel at his first pit stop, and ran longer than most before exchanging his second set of hard tyres for super softs.

The New Zealander described his experience as ‘painful’ through the middle stint, but he was a rocket on tyres which were a full nine laps newer than Davison’s for his run home.

“It’s cool, but a bit unfair when his tyres are so much older, but still a cool feeling,” said van Gisbergen of the battle with the Dick Johnson Racing driver.

“I think it was a bit of pain for us in the middle stint; we put ourselves in the wrong bit and we ran pretty long.

“So, Andrew was telling me they’re doing 14s and I’m doing 16s; it was a bit of pain there for a few laps but certainly feels good at the end when you’ve got better tyres.”

Nevertheless, he conceded that the #97 Triple Eight Race Engineering crew might also have erred somewhat on their strategy.

The two-time champion pointed to the fact that his big first fill meant he emerged one position behind Andre Heimgartner, who had already proven to be speedy in the R&J Batteries ZB Commodore.

Van Gisbergen followed Heimgartner for almost 13 laps before the Brad Jones Racing driver got held up by David Reynolds, one of only three who had started on super softs and hence by then on the slide back down the order.

“We put ourselves on a full tank, behind Andre, who’s pretty good this weekend, on the same tyre, and he’s gaining three or four car lengths down the straight because he’s so light,” he recounted.

“So, I just got stuck behind him really; the tyre just overheats and the hard tyre’s not very good, as we all know.

“Then as soon as I got past him – he got tripped up by Reynolds – the tyre cools down a bit and I was fine, but probably just got the strategy a little bit wrong there.”

Qualifying for Race 20 starts tomorrow at 10:10 local time/AEST, before another Top 10 Shootout and 88-lapper later in the day.