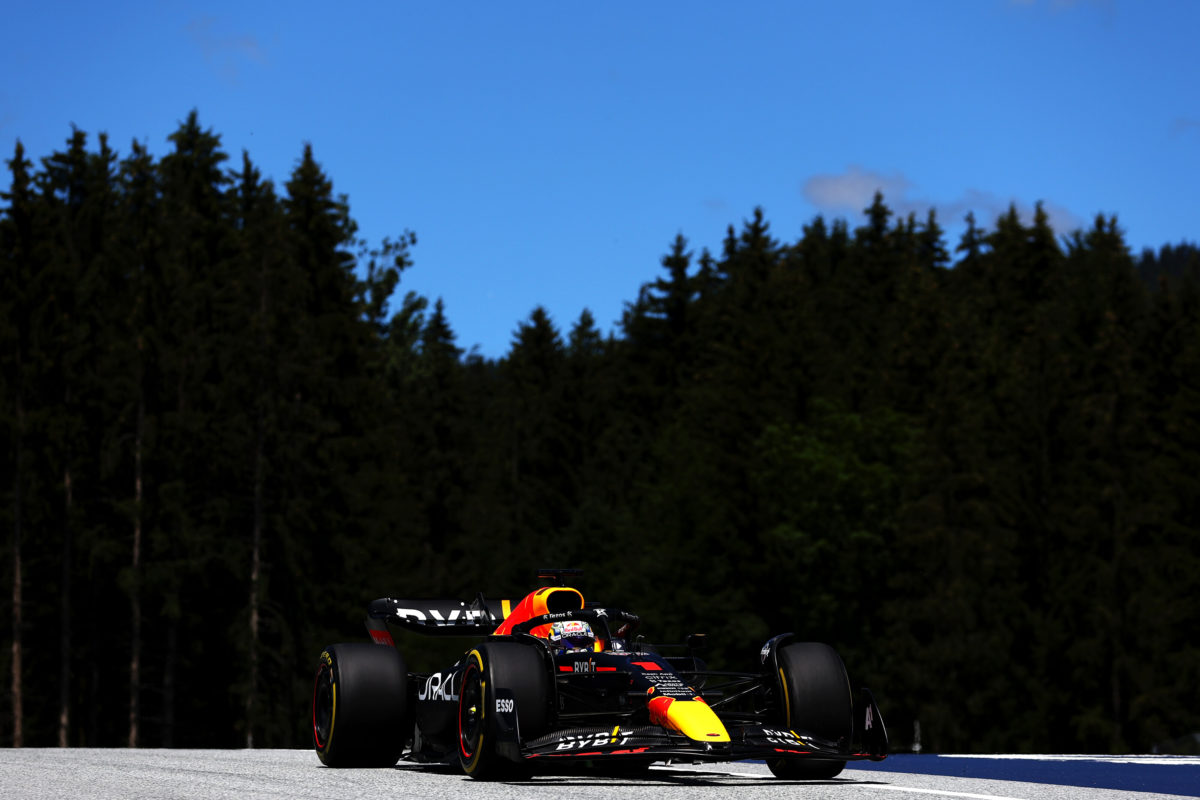 Max Verstappen has topped the first and only practice session for the Formula 1 Austrian Grand Prix prior to Qualifying.

The Dutchman headed Charles Leclerc by 0.2s after a session which was twice interrupted by red flags – once for Lando Norris and another for debris.

George Russell was third best while McLaren had a difficult opening hour as Norris stopped on track and Daniel Ricciardo battled DRS issues for much of the outing.

With just a single 60-minute practice session before cars headed into Qualifying and parc ferme conditions, it was a busy start.

The only driver not to immediately leave the lane was Valtteri Bottas, who didn’t join proceedings until some seven minutes had elapsed.

Medium tyres were in use by all drivers, Max Verstappen fastest initially with a 1:08.656s, quickly bettered by Kevin Magnussen with a 1:08.501s.

Sergio Perez made a mistake under braking at Turn 4 after five minutes, sliding wide and bouncing through the gravel before rejoining.

The opening 10 minutes were busy, though Lance Stroll’s early progress was hampered as the team worked on the rear wing on his Aston Martin.

McLaren had a busy start, with Norris reporting his car entered limp home mode while Ricciardo’s DRS flag was seen to be oscillating.

A quarter of an hour in, Verstappen set the pace with a 1:07.496s, still on the yellow-walled rubber.

Just five minutes later, Norris ground to a halt at Turn 6, climbing from the car to draw the red flag.

The Brit reported he was on fire after seeing smoke in the cockpit, hitching a ride back to the paddock on the back of a scooter.

While the McLaren was recovered, the clock continued to tick down, the session resuming some eight minutes after the red flag was thrown.

Following the restart, Ferrari fitted soft tyres to both its cars.

On the soft tyres, Leclerc improved to 1:06.650s, though Verstappen also improved when he had the red rubber fitted, logging a 1:06.302s.

With just under 22 minutes remaining, the red flag was shown for a second time, this for debris on the circuit on the chute between Turn 6 and Turn 7.

Running resumed with 16 minutes remaining, officials using the interruption to return Norris’ McLaren to the garage.

Qualifying simulations were the order of the day in the final minutes as teams looked to get a read on their cars ahead of the weekend’s first competitive running.

Ricciardo was sent out without a Gurney flap on the rear of his car as the team continued to chase the oscillation issues with his DRS.

It seemed to serve onto to make the issue worse, the Australian returning to the pits soon after.

Norris would not rejoin proceedings despite his car having been returned, the team placing it on stands and beginning diagnostic work on the MCL36.

The issue with Ricciardo’s rear wing was resolved in the final moments of the session such that there was no time to complete a proper qualifying simulation.

He ended the session 17th fastest as a result, 1.4s off the outright pace with his full potential unknown.

Verstappen was fastest, his 1:06.302s standing the test of time, with Leclerc second and George Russell third.

Perez was 0.5s off the pace of this team-mate, then came Lewis Hamilton and the promising Magnussen.

The top 10 was completed by Sainz, Fernando Alonso, Mick Schumacher, and Yuki Tsunoda.

Qualifying, which sets the grid for Saturday’s Sprint session, begins at 01:00 AEST.