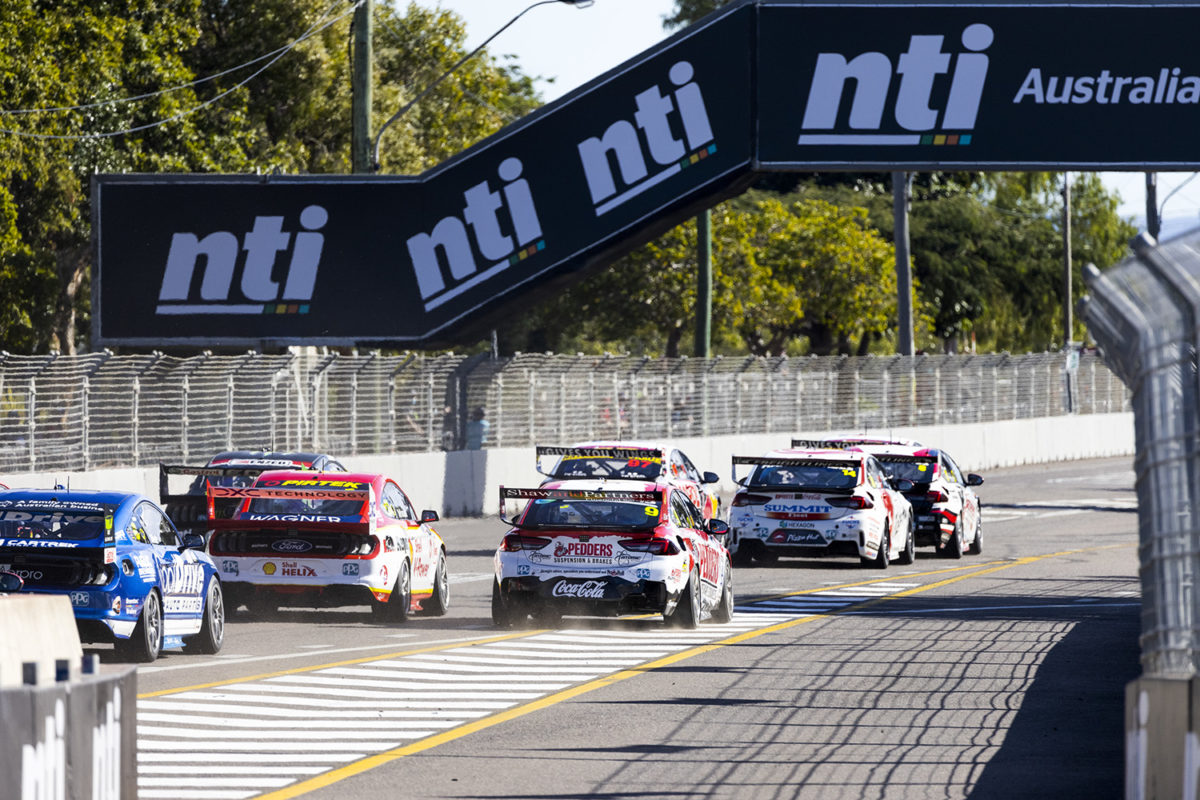 The Supercars Championship field at Townsville in 2021

The tyre allocation for this weekend’s NTI Townsville 500 represents something of a “lottery”, according to leading Supercars drivers.

Event 7 of the Repco Supercars Championship will be run with multiple tyre compounds, namely the hard and super soft, the latter of which has not been used in North Queensland before.

Furthermore, drivers will not get a chance to practice on them in Townsville, with just one set of the super soft allocated for Saturday’s Race 19 of the season and another for Sunday’s Race 20.

On top of that, the minimum tyre pressure (which applies to both compounds) is 19psi this weekend, instead of what had, until recently, been the standard 17psi.

All up, it makes for plenty of variables for drivers and engineers to get their heads around.

“It’s going to be a bit of a lottery with hard and super soft and not getting to drive on it [until the race],” said Red Bull Ampol Racing’s Shane van Gisbergen.

Cameron Waters remarked, “I think it’s going to be a lot of fun on that super soft for the first 10 laps, and then it won’t be much fun after that.

The Tickford Racing driver added, “It’ll be a little bit of a lottery. If a Safety Car comes at the wrong time, it can really help or hinder you.

“You’ll see people putting that super soft on at different points in the race and you’re just going to have to hope the Safety Car goes your way if there is a Safety Car.”

Higher pressures were introduced at the previous event of the season in Darwin, when teams were obliged to run a minimum of 20psi at Hidden Valley Raceway.

The decision was said to have been made primarily to protect the structure of the tyre, but it was also anticipated that it would liven up the racing by causing higher degradation.

That arguably proved not to be the case, vindicating van Gisbergen’s post-Friday practice comments regarding the “stupidly high” pressure figure.

However, the championship leader expects 19psi to work well at the Reid Park Street Circuit this weekend.

“What they did at Darwin was a mistake, I think, with the tyre pressures,” he declared.

“It didn’t make the racing better – it was pretty boring – but hopefully they learn from that and make the sprints better for the rest of the year.

“I think it’s track-specific, so probably here, it’ll [19psi] be good, it’ll do what they want.

“At tracks like Darwin and Winton, it doesn’t really work, but here I think it will.”

Despite all the talk about the super soft Walkinshaw Andretti United’s Chaz Mostert, who won the weekend finale in Darwin, said hard tyre pace will be a more important factor.

“It’s probably the first time the last couple of rounds we’ll look at strategy and stuff like that,” said the Mobil 1 Optus ZB Commodore pilot after a string of SuperSprint events.

“Here with long races, you’ve got two stops to think about, sometimes even three, which throws a spanner in the works, and then you’re not going to be on a super soft tyre until the race, so that’ll be very unique as well.

“[But] you still prioritise what the hard pace is on your car because you spend most of the race on that.”