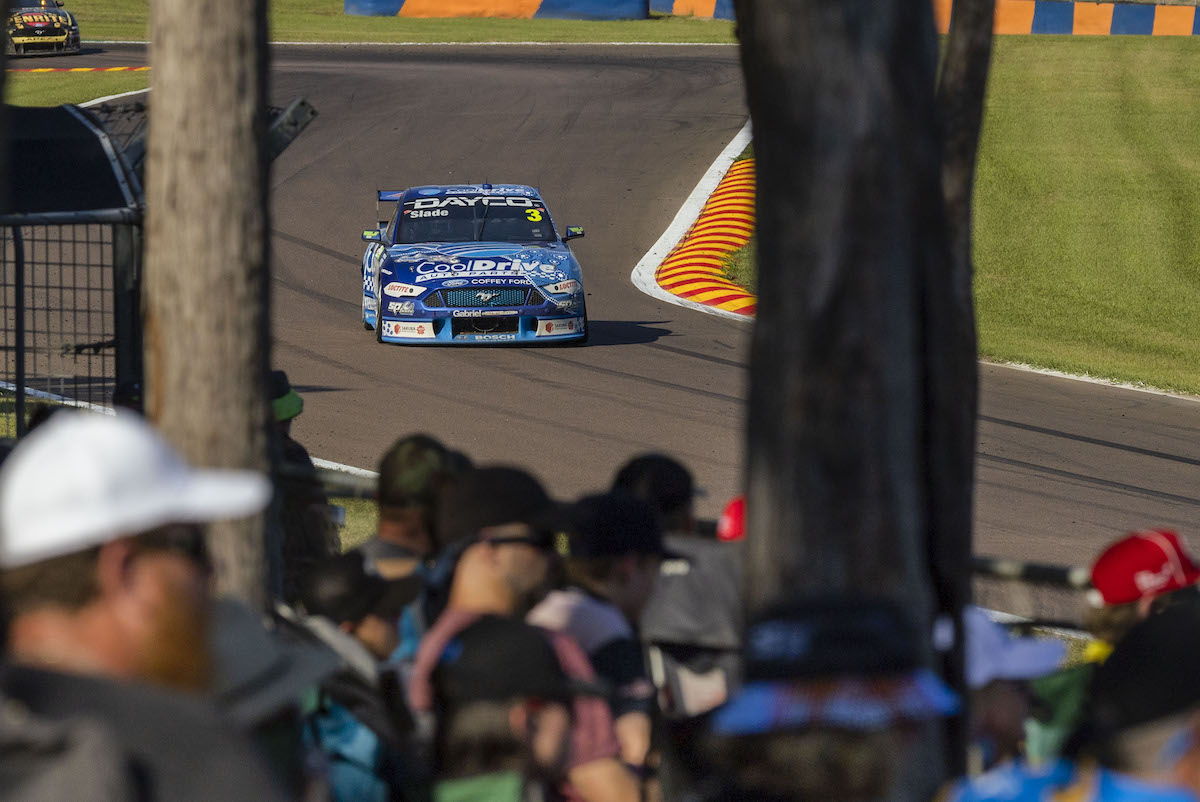 CoolDrive Mustang has inexplicably fallen off the pace in recent months

Tim Slade has conceded the Blanchard Racing Team’s harsh drop in form is puzzling, with the car suddenly a mystery.

The way Slade has spoken with bemusement in recent rounds about his and BRT’s unexpected dip is reminiscent of his troubling 2019 at Brad Jones Racing – his fourth and final campaign there.

“I guess short answer: yes,” the 36-year-old told Speedcafe.com when asked if the situations felt comparable.

“But then we found the problem and we were back to where we should be and obviously had a podium in the last race [of 2019] and a strong last weekend.”

Slade is off-contract, but does seem to fit well into the BRT way of racing. Talks regarding a contract extension are due to start soon.

Nevertheless, it has been a half-season of two halves for the #3 CoolDrive Mustang.

Slade never finished outside the top 10 in the six races at Sydney Motorsport Park and Albert Park. At Symmons Plains in between, he was no worse than the midfield and qualified as high as fifth.

Rounds 4 to 6 have been a vastly different story: he’s qualified 13th or worse on every occasion, and not finished a race higher than 10th.

Team owner Tim Blanchard admitted post-Darwin that a “reset and rethink” was in order, with Slade frustrated by the “mysterious struggle”.

“It’s obviously frustrating given I felt as though the first three rounds of the year we had pretty good outright pace when we worked it out,” Slade told Speedcafe.com.

“Sydney was Sydney, it was obviously just a follow-on from the four races there last year and continuing down the path of what you learnt last year, but even so I think outright pace was probably a little bit better than what we had there last year.

“Then we had a new part in the car for Tassie and we were terrible the first day outright speed-wise, quali.

“I feel as though my feedback was pretty clear on what we needed and then Mirko [De Rosa, engineer] was able to give me what I needed and we qualified top five or whatever the following day.

“Same with the Grand Prix, we were bad there the first day and I was like ‘we need this’ and Mirko was able to give me that, and again we go and qualify top five.

“Just the feedback from the car hasn’t really been super positive [since then].

“I guess there’s not just one particular thing that kind of stands out like it did in the first few rounds. I don’t know, it just hasn’t really given positive feedback in general and to set-up changes and whatever else.

“I feel as though why we can get better race results than qualifying results is the car hangs onto its tyres better than others around us basically.

“I feel as though our pace in the race when the tyre is fresh is still poor, but then others come back to us and eventually back past us as their tyres go away, and ours just keep on going.”

That characteristic may at least play into BRT’s hands this weekend, with the NTI Townsville 500 comprising of two 250km races – a shift away from the usual SuperSprint format.

“For sure, tyre life helps in the races but everyone is turning up to the track to win the race,” Slade commented.

“So like I said, our pace is still a fair way off winning the race so we need to sort it out and have a bit more outright pace and then I guess we have confidence in the car looking after its tyres, which obviously helps at Townsville, and it helped us there last year.”

Slade was sixth and eighth in the two Townsville 500 races last year.

He remains 10th in the 2022 drivers’ standings, with Round 7 of the Repco Supercars Championship kicking off with Practice 1 on Friday morning.