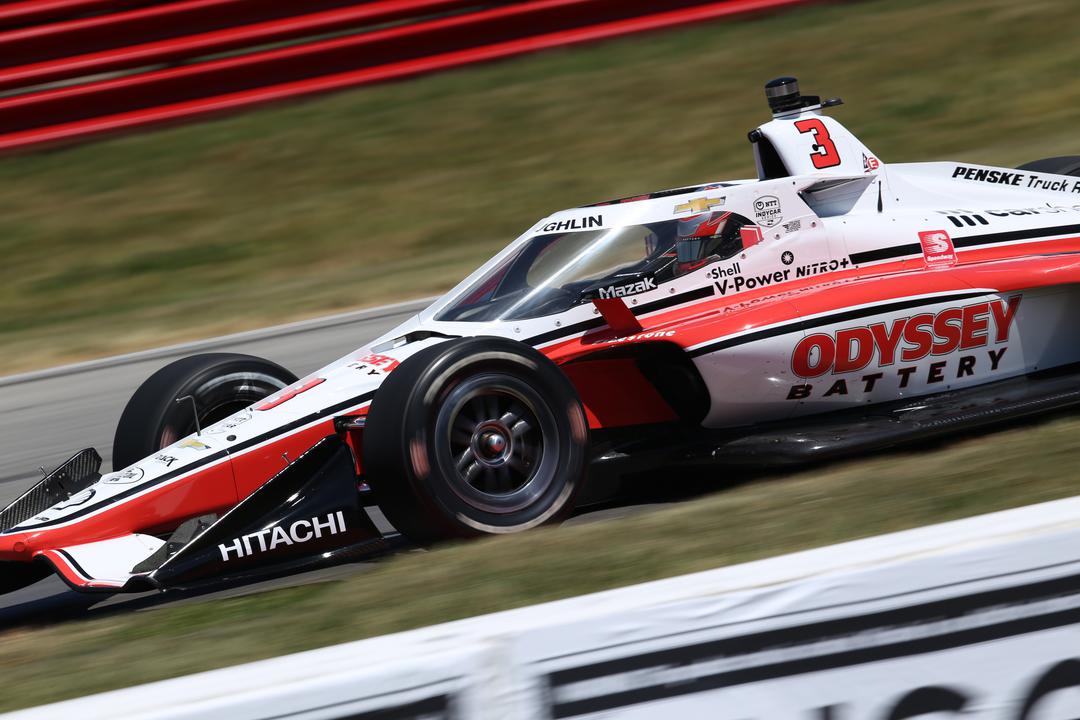 Scott McLaughlin has won the Mid-Ohio IndyCar race as Team Penske team-mate Will Power charged from last after an opening lap spin to finish third.

McLaughlin took over the lead in a Caution-affected first pit stop cycle and was effectively never headed for the balance of the 80-lap race, although the #3 Chevrolet pilot had to survive pressure from Alex Palou to stay in front.

Palou finished second in the #10 Chip Ganassi Racing Honda, while Power got back into an effective podium position with more than 20 laps to go and stayed there.

Rinus VeeKay (Ed Carpenter Racing), Scott Dixon (Ganassi), Marcus Ericsson (Ganassi), and Josef Newgarden (Penske) filled fourth through seventh at the chequered flag, while pole-sitter Pato O’Ward was among a handful of non-finishers, due to a drama with his McLaren SP entry’s Chevrolet engine.

In the series standings, Ericsson continues to lead, by a reduced, 20-point margin over Power, with Newgarden third at 34 points off the pace and McLaughlin up to seventh at 69 points from top spot.

The initial start was waved off before O’Ward led the field to a green flag on Lap 2, at which time his McLaren SP team-mate Felix Rosenqvist challenged McLaughlin for second position at Turn 4, the first corner of the race.

McLaughlin held off Rosenqvist on his outside, and the Swede had to then hold off Colton Herta (Andretti Autosport w/ Curb-Agajanian) when the track switched back at Turn 5, as Dixon took up fifth position.

Power had qualified 21st after incurring a penalty and was last when he spun at Turn 9, having tried to pass both Christian Lundgaard (Rahal Letterman Lanigan Racing) and Takuma Sato (Dale Coyne Racing w/ RWR).

Despite being the only driver in the top eight to start on primary tyres, Rosenqvist saw off early pressure from Herta and continued to run third until he struck apparent engine trouble on Lap 9, pulling off and drawing a Caution.

Of the notables further back, Alexander Rossi (Andretti) inherited ninth, Newgarden 11th, and Ericsson 13th, while Power used the Caution to sneak in a near-free pit stop.

When the restart came on Lap 15, Herta attacked McLaughlin at Turn 1 but could not get the move done and instead got passed by Dixon on the run to the Keyhole (Turn 2), then just clung on to fourth spot when Simon Pagenaud (Meyer Shank Racing) got alongside through Turns 4 and 5.

O’Ward’s lead was a full second to McLaughlin and almost another to Dixon at the completion of Lap 21, by which time Power had made his way back up to 18th.

Palou was first of the top 10 to pit, switching from scuffed reds to new reds on Lap 25, while O’Ward’s lead dropped by half a second on Lap 27 to be back to 0.77s.

The Mexican was soon screaming on his radio about a gearbox problem and “losing power”, and was into the pits on Lap 29 for a relatively routine stop, with Dixon following him into the lane.

Moments later, Kyle Kirkwood (AJ Foyt Racing) was in the barriers after a snap at Turn 9, with Race Control waiting long enough on the Caution for McLaughlin and anyone else who needed to get into the pits to do so.

Once the running order was sorted out such that it reflected positions at the blend line, McLaughlin (black tyres) emerged in the lead from Palou (reds), Herta (blacks), O’Ward (blacks), Dixon (blacks), and Newgarden (reds), with Power (reds) using the Caution to pit again and effectively get onto the same strategic phase as the two-stoppers.

The green flag flew on Lap 36, with Palou going to the outside of McLaughlin at Turn 4, but he was held at bay.

Another Caution was called at that point anyway, given Jack Harvey (RLLR) had punted Dalton Kellett (AJ Foyt) at the Keyhole, with Car #4 stalling in the infield.

The Queenslander dived past Pagenaud at Turn 1 on Lap 40, then made an almighty lunge down the inside of Rossi on Lap 43 at Turn 4 to take ninth spot.

Meanwhile, red tyre-shod VeeKay had rounded up both Dixon and Newgarden at Turn 6 on Lap 40, and soon picked off O’Ward for fourth as Car #5 continued to struggle with its powerplant.

Dixon and Newgarden both breezed by O’Ward on Lap 44, the Mexican still trying to make the best of a bad situation by playing with fuel maps, and Power was up to eighth on Lap 47 for the same reason.

McLaughlin had pushed his lead past one second when another Chevrolet car stopped due to an apparent engine problem, namely Tatiana Calderon parking her #11 AJ Foyt entry next to the circuit.

Newgarden had just pitted and everyone else got into the lane before the Caution was called on Lap 53, with the exception of Herta, who seemingly got caught out by the use of radio codewords.

Herta thus assumed the lead, from McLaughlin and Palou on black tyres, then VeeKay, Power, Dixon, Ericsson and Newgarden on reds, with a green flag waving again on Lap 58.

However, Power’s reds were new and VeeKay’s used, and the Penske driver went down the inside of the Dutchman into an effective podium position when they arrived at Turn 4.

McLaughlin staved off Palou at the same corner on Lap 59, just as the fifth Caution period was called due to Grosjean sitting against the barriers after contact with Andretti team-mate Rossi at the Keyhole for the second lap in a row.

Herta pitted under that Caution and Car #3 thus led the field back to green on Lap 63, at which point Palou managed to retain second place despite dropping a wheel off exiting Turn 1.

Replays showed Rossi and Grosjean making more contact as they took that restart, before Herta ended up off the road a few laps later after he got a touch from Grosjean.

The Frenchman and Rossi would be issued penalties for avoidable contact, the latter presumably for the subsequent wheel-banging with Devlin DeFrancesco which made it five Andretti-on-Andretti incidents in the space of a dozen laps or so.

Meanwhile, with 10 laps to go, McLaughlin had more than a full second on Palou, and it was another one second back to Power in third position.

Palou got the gap back to about six tenths but, with a push-to-pass deficit relative to #3, was not a major threat by then.

McLaughlin took victory by an official margin of 0.5512s from the Spaniard, with Power three seconds further back in third.

IndyCar now heads to the streets of Toronto for Event 10 of the season on July 15-17 (local time).