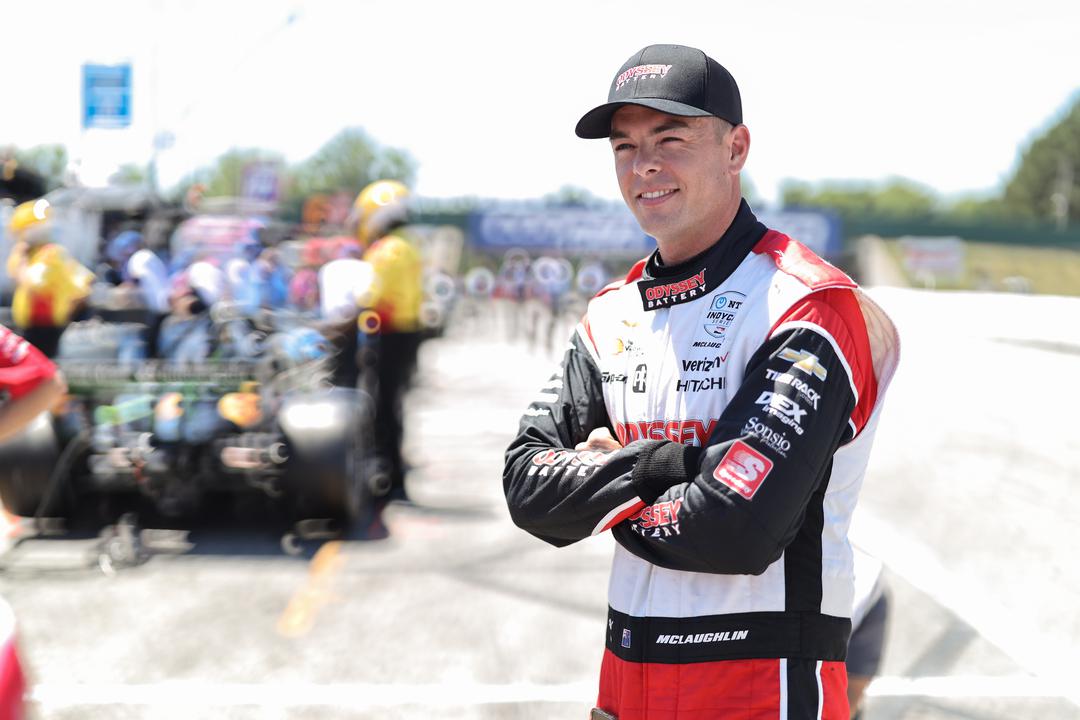 Scott McLaughlin believes he is still alive in the IndyCar title battle after a win in the Mid-Ohio race.

The Team Penske driver jumped pole-sitter Pato O’Ward in the first pit stop cycle and then saw off 2021 champion Alex Palou to prevail by half a second at the chequered flag.

The result makes him just the second multi-race victor of the season to date, the other being team-mate Josef Newgarden, although McLaughlin is still 69 points behind series leader Marcus Ericsson.

With 50 points on offer for a win, plus as many as four bonus points for various achievements, the New Zealander is therefore at a deficit relative to Ericsson which exceeds the equivalent of a full race.

Furthermore, there are another five drivers between him and the Swede who McLaughlin would need to overhaul, with just eight races remaining.

However, the three-time Supercars champion is not ruling out adding an IndyCar title to his CV this year.

“That’s something that I probably didn’t do the last sort of month, so I’m excited for what’s ahead.

“A win’s a big thing for us, moves us forward a little bit. I don’t know where it’s put us in the standings, but I think if we just keep building…”

McLaughlin is confident about the next three races, despite Toronto having not been on the calendar last year when he completed his first full season in IndyCar.

“Toronto [next race], I feel like it’s going to be a track that’s going to suit me,” he added.

“I haven’t been there but I’m excited for it, and then Iowa, I felt really strong at the tests, and it’s two races there.

“So, we’re going to have a solid next three races. Who knows where it puts us?”

Reflecting on the Mid-Ohio race specifically, the 29-year-old was pleased to convert “promise” into a second race win of his IndyCar career.

“[It was an] amazing day,” stated McLaughlin, who had started from the front row.

“Obviously, our plan was to just slot into P2 if we could. Best case off the start was to get ahead of Pato but worst case was to slot in behind and then just get into it and I felt pretty good, felt pretty strong straight away.

“Then I think we lost the balance towards the end of the race a little bit – just, the car wasn’t as nice, those last few stints, even though we were leading – but thankfully had enough to hold off Alex there.

“It was some pretty tense restarts and defending and doing bits and pieces, but I’m really proud of everyone, the car’s been awesome.

“We’ve had promise of top fives and bits and pieces, but we just haven’t put it together and to finally put it together, two good races – you know, had Road America, P7; today, winning the race – it’s a really proud moment for us all.”

Of McLaughlin’s team-mates, Will Power qualified 21st and was last after a Lap 1 spin but scythed his way to third at the chequers, while Josef Newgarden finished in seventh position from Row 7.

Power remains second in the series but has closed the gap to Ericsson to 20 points, with Newgarden one spot and 14 points further back.

The Toronto event begins in a fortnight (July 15, local time), and can be seen live and ad-free on Stan Sport.