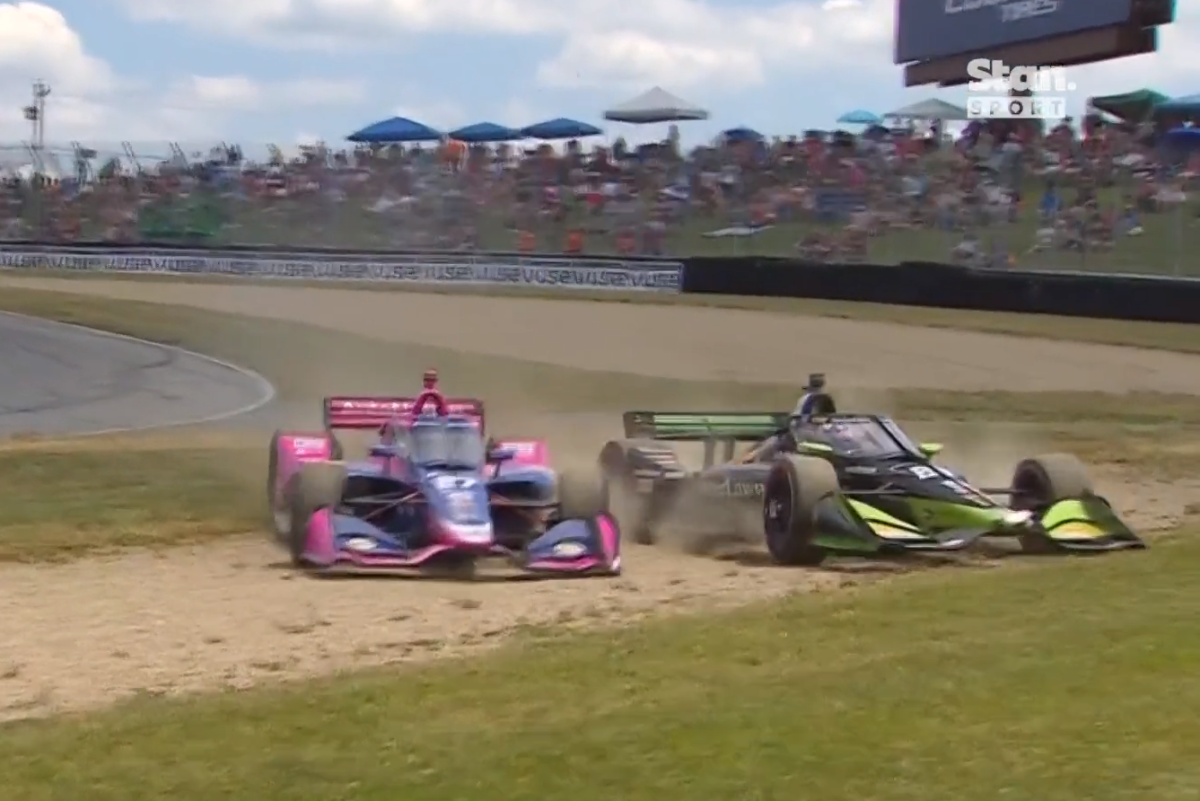 Collectively, the four Andretti drivers managed to run into each other five times, with Rossi involved in four of those incidents.

He and his French team-mate hit at the Keyhole (Turn 2) on two consecutive laps, with the latter, Lap 59 contact putting both off the road and Grosjean into the tyre wall.

On that second occasion, the initial bang pulled the steering wheel out of Rossi’s hands, causing him to veer off, and Grosjean to yell into his radio, “What’s wrong with him?”

Incredibly, they were only just about to take the green flag again after the recovery of Grosjean’s #28 Honda when they came together for a third time, at Turn 12.

“Shame for him because he did it once on the [Lap 58] restart and I thought, ‘Okay, maybe he slipped because he was on cold tyres,’ do it again the next lap, and then he did it on purpose.

“My hand is hurting. We lost the bloody race.”

Both Grosjean and Rossi were pinged for avoidable contact, but the former’s punishment came for a touch which put the #26 Andretti entry of Colton Herta off the road, and the latter’s presumably for clattering into the #29 Andretti car of Devlin DeFrancesco.

More contact between Andretti teammates!@townsendbell says, “there’s mutiny at Andretti today. It is every man for himself.” #INDYCAR pic.twitter.com/BAJQGyh9ep

“I must apologise to Colton,” added Grosjean.

“I had a lot more grip than everyone else so I just braked.

“I didn’t realise Colton would brake so early, so I tried to avoid contact.

“That wasn’t good from my side, but I think that’s going to be it as far as today, it’s just that Rossi is an absolute idiot out there.”

Rossi and Grosjean are known to hardly be the best of mates, and the latter’s mood did not improve when he was told to stay behind Car #27 in the closing stages of the race.

“What do you want me to do; just block everyone behind and not go ahead?” he asked on his radio.

When that directive was confirmed, he shot back, “Because Rossi put me in the wall, so I am not going to protect him.”

Rossi, however, did not believe there was much in the incidents when he spoke to media.

“He [Grosjean] was on a softer tyre and probably going to get around me, but he likes to do it fast and early.

“I had to test him there and obviously that’s unfortunate to tap into a team-mate, but that’s the way it goes.”

Rossi is on his way to McLaren SP next year, but denied he is racing his current team-mates differently because of his impending exit.

“Of course not,” he stated.

“We’re team-mates for Andretti Autosport and trying to get the best result possible.”