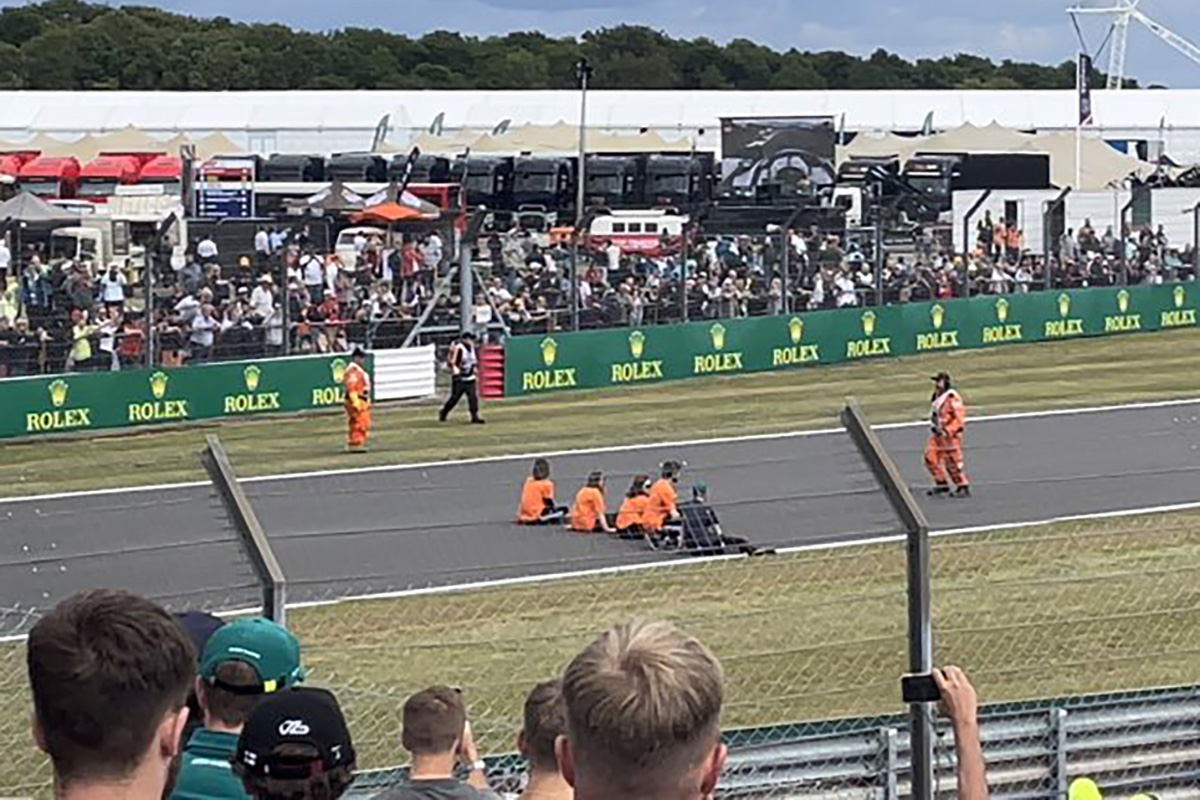 Seven protesters who risked their lives by invading the track on the opening lap of the Formula 1 British Grand Prix have been arrested.

Police announced following Sunday’s race that a number of people who’d invaded the track during the race had been detained.

While attentions were focused on the massive crash at the opening corner that saw Guanyu Zhou’s Alfa Romeo Sauber clear the barrier, protesters made their way onto the Wellington Straight.

They did so as the field exited The Loop and Aintree, footage from fans showing the individuals entering and then sitting on the racetrack.

Police had warned against such a move in the days prior after receiving a tip-off that a track invasion was planned.

“I’m really disappointed that this group of people ignored our warnings prior to race-day and made the incredibly dangerous decision to enter the track,” said event commander chief inspector Tom Thompson on Sunday evening.

“We offered to facilitate a peaceful event at the circuit but they instead chose to put the lives of the drivers, marshals and volunteers at risk.

“It is incredibly disappointing that anyone would make the decision to do this.

“Thankfully we had plans in place for an eventuality such as this and the group were swiftly removed and arrested by our officers.

“All seven are currently in custody where their details are being ascertained.

“Finally, I would like to thank all of the officers and staff, as well as our partners, who have worked tirelessly on this policing operation.

“Generally we have had very low crime rates, today’s incident was dealt with effectively and efficiently, and I could not have asked for more.”

During the race, the FIA acknowledged the invasion, which was not covered on television.

“We can confirm that after the red flag, several people attempted to enter the track,” it announced.

“These people were immediately removed and the matter is now being dealt with by the local authorities.”

Fortunately, as the race had been quickly red flagged following the Turn 1 crash, drivers were not at racing speeds when they encountered the protesters, and able to pick their way by with little risk.

“We did it anyway,” the group, which Speedcafe.com has elected not to offer notoriety by naming, wrote on social media.

“This action was covered in the national press two days ago, but a handful of ordinary people determined to tell the truth have outwitted the @GOVUK and @NorthantsPolice.

“The disruption will end when new oil & gas is stopped.”

Formula 1 knows all too well what happens to people on the racetrack, with Tom Pryce killed at the 1977 South African Grand Prix in a grotesque incident when he hit a fire marshal crossing the track mid-race.

This year’s invasion is the second such occurrence in Silverstone after Neil Horan ran towards cars on Hangar Straight during the 2003 edition of the British Grand Prix.

Once the race was restarted, 53 minutes after the red flag was shown for the Zhou crash, it ran without further external incident, Carlos Sainz going on to claim his maiden grand prix win.