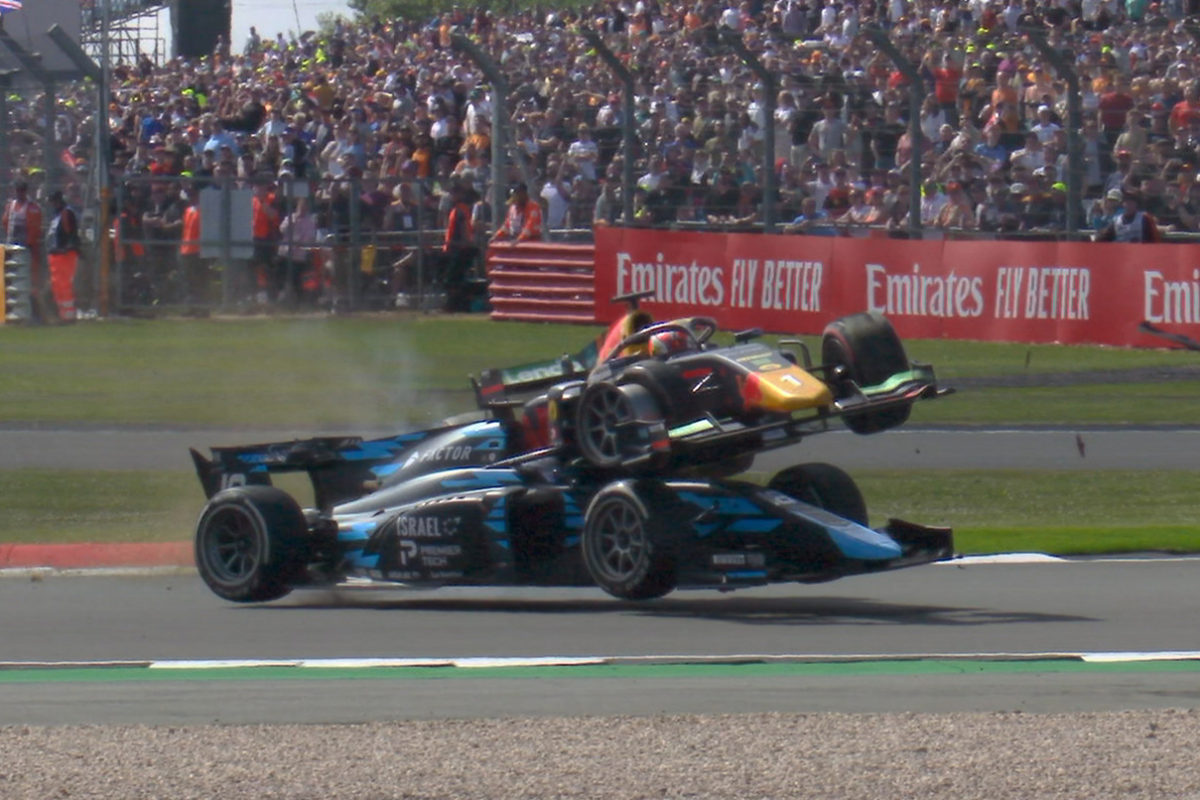 Logan Sargeant has won the Formula 2 Feature race at Silverstone in an encounter marred by a terrifying opening lap crash.

The American headed Theo Pourchaire and Liam Lawson to the flag, while Roy Nissany and Dennis Hauger were eliminated in terrifying fashion.

Exiting Stowe on opening lap, Nissany ran wide to afford Hauger a run, the pair making contact which sent the latter through the grass, his car launched on the sausage kerb on the apex of Vale.

Airborne, it impacted Nissany, the halo saving the Israeli driver’s life as it took the brunt of the impact of the flying Dallara.

Thankfully, both drivers were able to climb free and walk unaided from the incident which raises questions over the appropriateness of sausage kerbs.

At the start, Sargeant got away well from pole as Frederik Vesti bogged down out of second to find himself swamped on the run into Abbey for the first time.

That allowed Pourchaire to rise to second with Lawson third, while Jack Doohan found himself going the other way as he slipped from seventh to 12th in the opening exchanges.

Drama into the Vale Chicane at the end of the opening lap saw Nissany and Hauger eliminated from proceedings.

The Red Bull junior was little more than a passenger as he bounced through the infield before being launched by the kerbing into Nissany’s car.

The Safety Car was promptly deployed, with both drivers climbed free following the sickening clash.

The incident began as Nissany attempted to fend of Hauger, tagging his front-right wheel to peel the tyre from the rim.

With little steering and on the grass, there was little the Norwegian could do but prepare himself for the sickening impact which followed.

The pole sitter put his foot down exiting Stowe to maintain his advantage while there was squabbling further down the order.

That included Doohan slipping down another spot, the Australian losing out to Richard Verschoor to sit 13th.

By the time DRS has been opened, Sargeant had extended more than a second buffer over Pourchaire, who in turn had a similar advantage over Lawson.

The pit lane became a hive of activity on Lap 10, Vesti, Enzo Fittipaldi, Marcus Armstrong, and Clement Novalak heading in to swap the soft tyres for the hards.

Next time by, Lawson and Iwasa reacted, though it was a disastrous stop for the latter as the left-rear was slow going on.

Sargeant and Pourchaire were in a lap later, slick stops ensuring they emerged well clear of Lawson, the first of those in the pack to have already pitted.

Doohan, winner of Saturday’s Sprint race, was running an alternate strategy with the hard compound tyres fitted from the start.

It meant he was set to go deep into the 29-lap race before taking service and swapping to the red-walled tyres.

However, given the pace of those who’d already stopped, it looked an approach that required a late Safety Car to stand any chance of a result better than the bottom end of the top 10.

Vips was in the lane on Lap 23, though both Daruvala and Doohan remained on track.

Pitting from the lead, the Hitech driver emerged on a fresh set of soft tyres in an effective seventh.

Daruvala overshot slightly when he stopped on the next lap, though a faster stop than Vips’ saw him rejoin ahead of the Estonian.

However, the pair swapped places back into Brooklands, the former Red Bull junior making the most of the tyre temperature advantage he held.

Doohan’s chances of a strong result all but evaporated by a slow stop when he pitted on Lap 25, the right-rear unwilling to go on.

The Australian emerged behind Ayumu Iwasa in 12th place, though with a tyre advantage in the final laps.

Up front, Pourchaire was closing in on Sargeant, who had regained the lead following the completion of pit cycle.

The second-placed Frenchman was racing under a cloud.

Both he and team-mate Vesti were set to be investigated post-race for a pit stop infringement, ART seemingly mixing up the two drivers tyre sets during their stops.

In the pack, Doohan was making quick progress, climbing two places on Lap 26.

He continued making forward progress, rising to ninth on Lap 27, though it was there his progress halted as the gap to Armstrong in eighth was insurmountable with just two remaining laps.

Having come under brief pressure from Pourchaire, Sargeant was able to lift his pace enough to stabilise the advantage he held, enjoying a 1.2s lead as he began the final tour.

He held that to the flag, winning from Pourchaire by 1.6s, with Lawson rounding out the podium.

The Formula 2 Championship continues next weekend as it supports the Formula 1 Austrian Grand Prix.