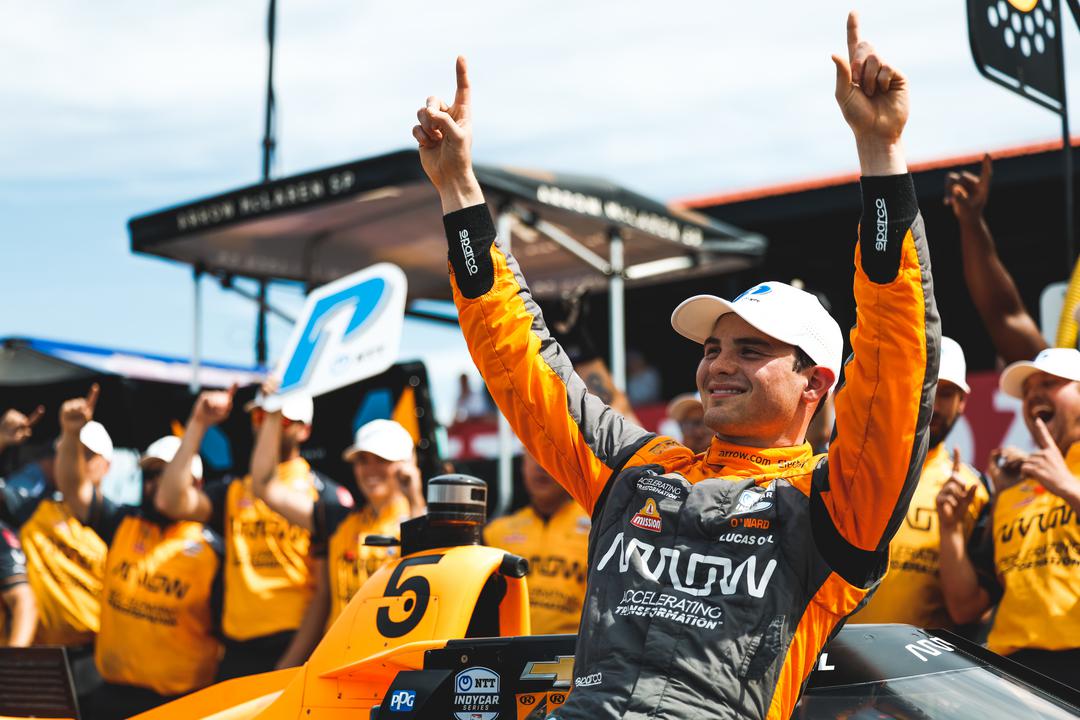 Pato O’Ward will seek to capitalise on his title rivals’ qualifying shockers when he starts from pole position in tomorrow’s IndyCar race at Mid-Ohio.

O’Ward was the only driver in the top five in the standings to make it through to the Fast Six, and one of just two to even get out of Round 1 of Qualifying.

Series leader Marcus Ericsson (Chip Ganassi Racing) and Josef Newgarden both could only get onto Row 7, and the latter’s Team Penske team-mate Will Power got stuck in 21st after an impeding penalty cost him progression from Group 1.

Even 2021 champion Alex Palou (Ganassi) took a relatively lowly seventh on the starting grid, handing a big opportunity to the man in the #5 McLaren SP entry.

O’Ward, however, is not counting his chickens just yet, having failed to finish the previous race of the season due to an electrical problem.

“It’s a great opportunity to capitalise, right, but there’s so many rules in IndyCar,” he said, presuming referring to how damaging an unfortunately timed Caution period can be, as an example.

“There’s certain rules that can really throw your race upside down if something happens that you really can’t control.

“Sometimes it is a lot better to actually start in the back, as we saw in like Portland last year, than being in the front.

“I think we’ve definitely executed when qualifying came, and I think tomorrow we just need to take the race as it comes and just be sure that we can react to certain things to keep our position.”

O’Ward was pleased to string a lap together when it mattered most at the Mid-Ohio Sports Car Course after “messy” first and second rounds of qualifying.

“It was a really messy qualifying from my side,” he admitted.

“Q1 and Q2, I kept leaving three, four [tenths], even half a second on the table just because I couldn’t get it right.

“If it wasn’t Turns blah-blah it was another turn in the next qualifying, so it was really tough to get it right.

“I’m super, super happy that I got it together for the team and for myself in Q3.

“It was a really solid lap, and I was very happy with the car.

“But yeah, it was a good qualifying for us. The best I’ve started here, if my mind is not wrong, I think is like 19th, so it’s a way better view than what I’ve had here in the past.”

The Mexican is predicting that fuel management and strategy will be significant in determining how the 80-lap race will play out, on a circuit on which passing is quite difficult.

“I think it’s going to be all about a fuel number; are you going to be hitting those to be able to get the strategy?” he declared.

“But, I think from years past, it’s not too bad on fuel save.

“Obviously, the plan is always to stay there whenever you’re starting in first, but there’s so many variables that can happen and that can throw your race upside down or help it.”

O’Ward will be joined on the front row by Penske’s Scott McLaughlin in what represents a Chevrolet lockout.

Stan Sport’s live and ad-free coverage of that encounter commences on Monday morning at 02:30 AEST.