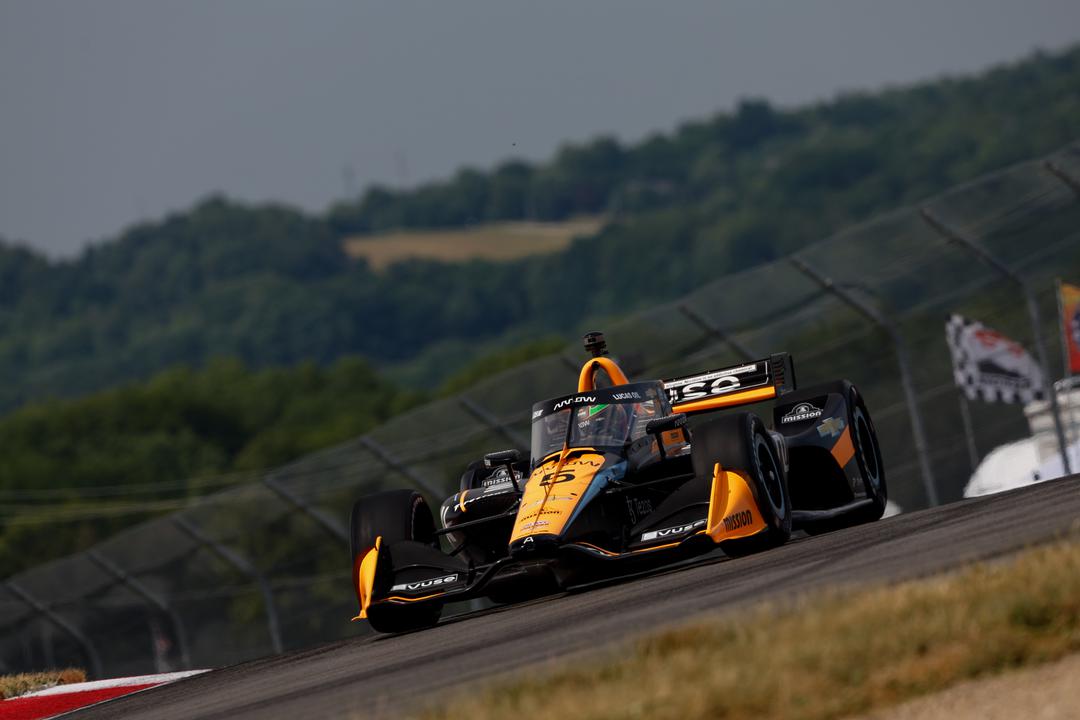 Pato O’Ward has qualified on pole position for the Mid-Ohio IndyCar race while Will Power is set to start from 21st after incurring a penalty.

McLaren SP’s O’Ward became the ninth different pole-sitter out of a possible nine so far this year, with Team Penske’s Scott McLaughlin making the front row at 0.1328s off the pace in his #3 Chevrolet.

McLaughlin’s team-mate Power was fastest, unofficially, in Group 1 of Round 1 but was found to have interfered with Helio Castroneves (Meyer Shank Racing) at the start of his second run.

The Queenslander was caught out weaving in front of Castroneves on the stretch from the Keyhole (Turn 2) to Turn 3, forcing the Brazilian to touch the grass to avoid contact, and hence was stripped of his fastest two laps.

The standard penalty for interference during the first two rounds of qualifying is also that the offending car shall not advance, but loss of lap times dumped Power to 11th in the group anyway, and hence the 11th row of the starting grid.

In fact, the top three in the series standings all failed to advance past Round 1, with neither Marcus Ericsson (Chip Ganassi Racing) nor Josef Newgarden (Team Penske) setting times good enough to make the top six in Group 1 and Group 2 respectively.

They will share Row 7 of the starting grid, series leader Ericsson 13th and Practice 1 pace-setter Newgarden 14th, while Castroneves is set to line up one spot further back.

In the final battle for pole, the Fast Six, O’Ward banked a 1:07.0852s straight out of the box before pitting the #5 Chevrolet.

The rest waited a little longer to lay down a time and, once they had done so, McLaughlin sat second on a 1:07.7144s despite already being onto a second set of used alternate compound tyres, having opted for reds in both of his Round 2 runs.

Felix Rosenqvist provisionally made it a McLaren SP front row lockout when he clocked a 1:07.2163s but McLaughlin hit back with a 1:07.1433s to be second-quickest again by the time the chequered flag came out.

They were thus the top three, with Rosenqvist’s aforementioned effort getting him onto Row 2 also.

In Round 2, McLaughlin jumped from 11th to first with a 1:06.5341s well after the chequered flag had come out, denying Alex Palou (Chip Ganassi Racing) passage to the Fast Six.

Palou was exactly one thousandth of a second slower than the driver who was sixth-fastest in that segment, Pagenaud, and will start seventh, while Alexander Rossi (Andretti Autosport) could only qualify 12th after clocking a 1:07.0155s.

McLaughlin instead inherited first position for that phase of qualifying on a 1:06.5897s, while Malukas was the fortunate recipient of the final position in the top six.

Ericsson could only manage a 1:07.1475 and a seventh-row start, Romain Grosjean (Andretti) only took 17th on the grid and Takuma Sato (DCR w/ RWR) 19th, while Simona De Silvestro (Paretta Autosport) will start from Row 13 after being slowest of that initial bunch of 13 on a 1:08.4995s.

Palou got through in fifth in the group on a 1:07.1155s despite an off at the Keyhole and another moment kicking up the first as he finished a hot lap, but would not progress beyond Round 2.

Stan Sport’s live and ad-free coverage of that 80-lapper commences on Monday morning at 02:30 AEST.