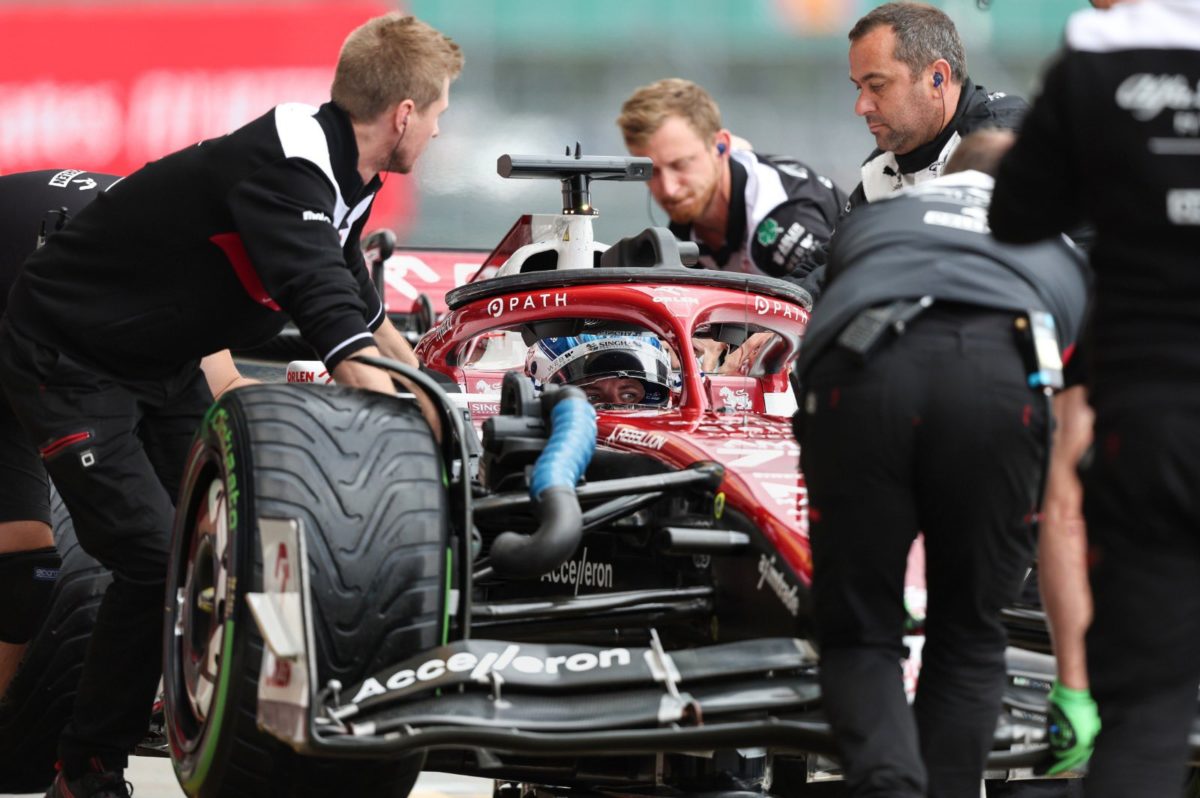 Intermittent rain for much of the 60-minute session saw little track action, with the circuit silent for an extended period.

Things improved in the final minutes, with many opting for slick tyres for the first time in proceedings, with Bottas logging the best of the unrepresentative laps.

He managed a 1:42.249s to top proceedings from Lewis Hamilton, and Carlos Sainz third best.

Rain began falling in the minutes prior to the session beginning, though that failed to discourage Mercedes or Ferrari.

Both Hamilton and George Russell completed nothing more than an installation lap, as did Sainz, while Charles Leclerc carried on for another tour.

It left the former championship leader as the only car on track, conditions worsening as increasing plumes of spray followed his Ferrari.

The circuit was far more wet at the Copse end of, with the end of Hangar Straight almost dry. Intermediate tyres were  therefore undoubtedly the correct choice.

Given, the conditions, times were comparatively meaningless, with Leclerc’s 1:43.801s the best in the opening 15 minutes.

However, not all drivers had been out, with only four having completed a timed lap in the first quarter of an hour.

Conditions did begin to improve after the 15-minute mark with the sun breaking through the clouds, quickly drying the circuit.

That did nothing but encourage a lull in activity as teams waited for a full dry line, which was developing painfully slowly.

Indeed, so slow was the track progression that it fell completely silent shortly after the halfway point, and remained so until Hamilton headed back out with 12-minutes remaining.

The weather had turned once again, meaning the Brit was still out on intermediate rubber.

The unstable conditions quickly improved though, the sun breaking through once again.

Hamilton returned to the lane with seven minutes remaining for a set of soft compound tyres, despite the circuit remaining damp especially in sections, particularly the middle sector.

A host of others followed his lead and headed out in the closing minutes, all on the soft compound tyres.

Lance Stroll was among them, the Aston Martin driver losing control and beaching the car at Copse in the tricky conditions.

With barely a minute left in the session, it was not resumed, leaving Bottas fastest from Hamilton, and Sainz – the order largely meaningless with only 10 drivers setting a time, and only half of those in anyway competitive.

Free Practice 2 follows at 01:00 AEST, with conditions forecast to have improved over the opening hour.