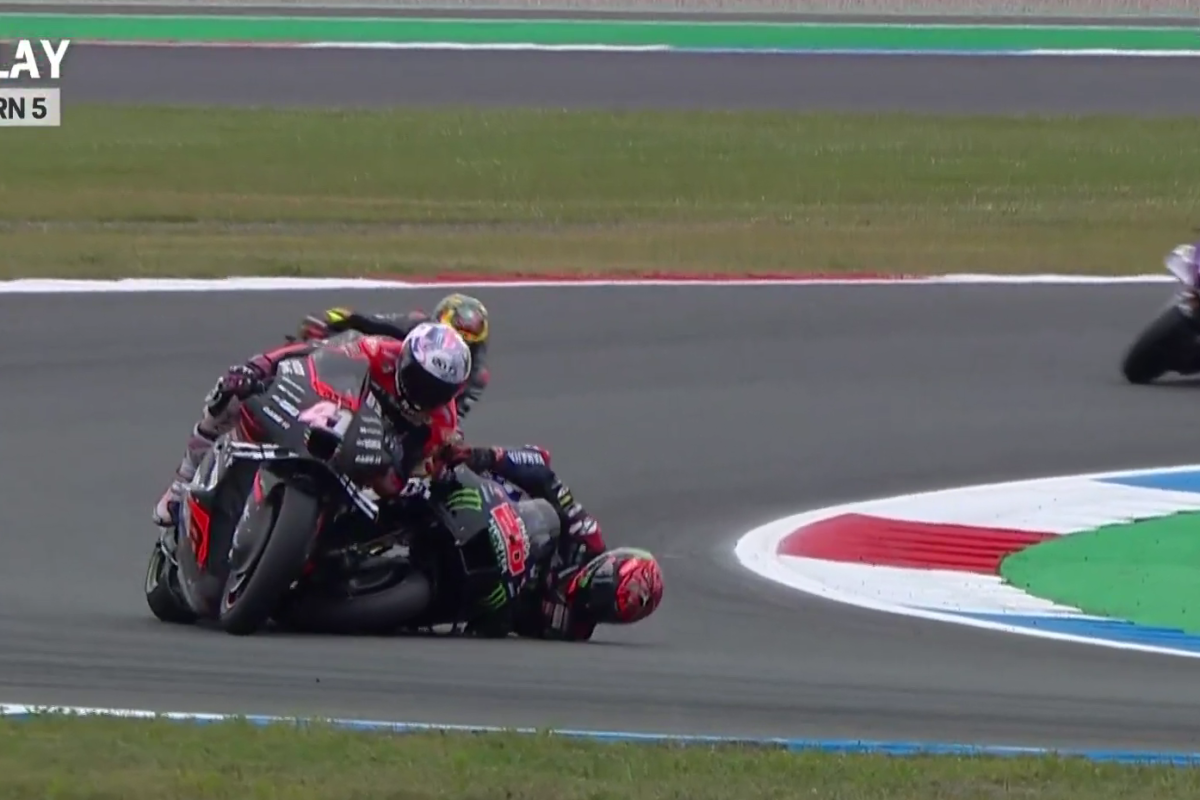 Yamaha is not letting the furore over MotoGP championship leader Fabio Quartararo’s long lap penalty die down, issuing a fresh statement outlining its grievances about the matter.

Quartararo took to Instagram on the day after the race in a post which was dripping with sarcasm about the “amazing job” which the stewards are doing, following the sanction issued to him after he crashed and ran into title rival Aleix Espargaro in the Dutch TT.

The French ace had been far more diplomatic in the squad’s post-race press release, although team director Massimo Meregalli had been quoted asserting that the penalty was “harsh” and “not consistent with race incidents we’ve seen in earlier GPs that were left unpunished”.

Now, another press release has been issued, this one containing comment from Yamaha Motor Racing managing director Lin Jarvis.

It’s a sure sign that the squad is still fuming about the penalty, which looms until the British Grand Prix unfolds after the summer break in August, with Jarvis outranking Meregalli in the team hierarchy.

Jarvis is quoted saying: “Fabio Quartararo, the Monster Energy Yamaha MotoGP Team, and Yamaha have always striven for fairness and sportsmanship in MotoGP.

“We are disappointed to see the inequality with which penalties are applied by the FIM MotoGP Stewards panel.”

What follows is a list of reasons as to why Yamaha disagrees with the penalty:

“The Monster Energy Yamaha MotoGP Team disagree with Sunday‘s decision by the FIM MotoGP Stewards panel for the following reasons:

What those three incidents are has not been pointed out, but one of them is likely to be the crash at the start of the Catalunya Grand Prix, when Takaaki Nakagami took out both Francesco Bagnaia and Alex Rins.

Rins was left with a fractured wrist and, despite trying to soldier on, pulled out of the German Grand Prix before race day.

Jarvis concluded: “We wanted to appeal the decision of the Stewards on Sunday at the Assen track, but this type of penalty is not open to discussion or appeal.

“We then wanted to raise the issue, as a matter of principle, with CAS (Court of Arbitration of Sport), but equally such a matter is not open to appeal.

“It is precisely for these reasons that correct, balanced, and consistent decisions should be taken by the Stewards in the first place and executed within the correct, reasonable time frame.”

Espargaro was running second on Lap 5 when Quartararo ran into him as he attempted a pass at Turn 5.

The contact put the Aprilia into the gravel trap, dropping the Spaniard to 15th before he completed an impressive recovery ride to fourth.

In a statement issued by MotoGP post-race, stewards cited Espargaro being “severely impacted” in explaining their reason for the penalty.

“During the MotoGP race at the Motul TT Assen, an incident between #20 Fabio Quartararo (Monster Energy Yamaha MotoGP™) and #41 Aleix Espargaro (Aprilia Racing) saw rider #20 crash and make contact with #41 at Turn 5,” read that statement.

“The FIM MotoGP Stewards panel deemed Quartararo was overly ambitious in attempting to overtake A Espargaro.

“#20 was not in a position to successfully complete the move and subsequently crashed, causing contact with #41 and forcing him to run wide.

“The avoiding action undertaken by A Espargaro allowed him to avoid crashing and rejoin.

“Nevertheless, his race was severely impacted.

“Quartararo has been given a Long Lap penalty to be served in the MotoGP race at the Monster Energy British Grand Prix.”

The British GP will be run on August 7.