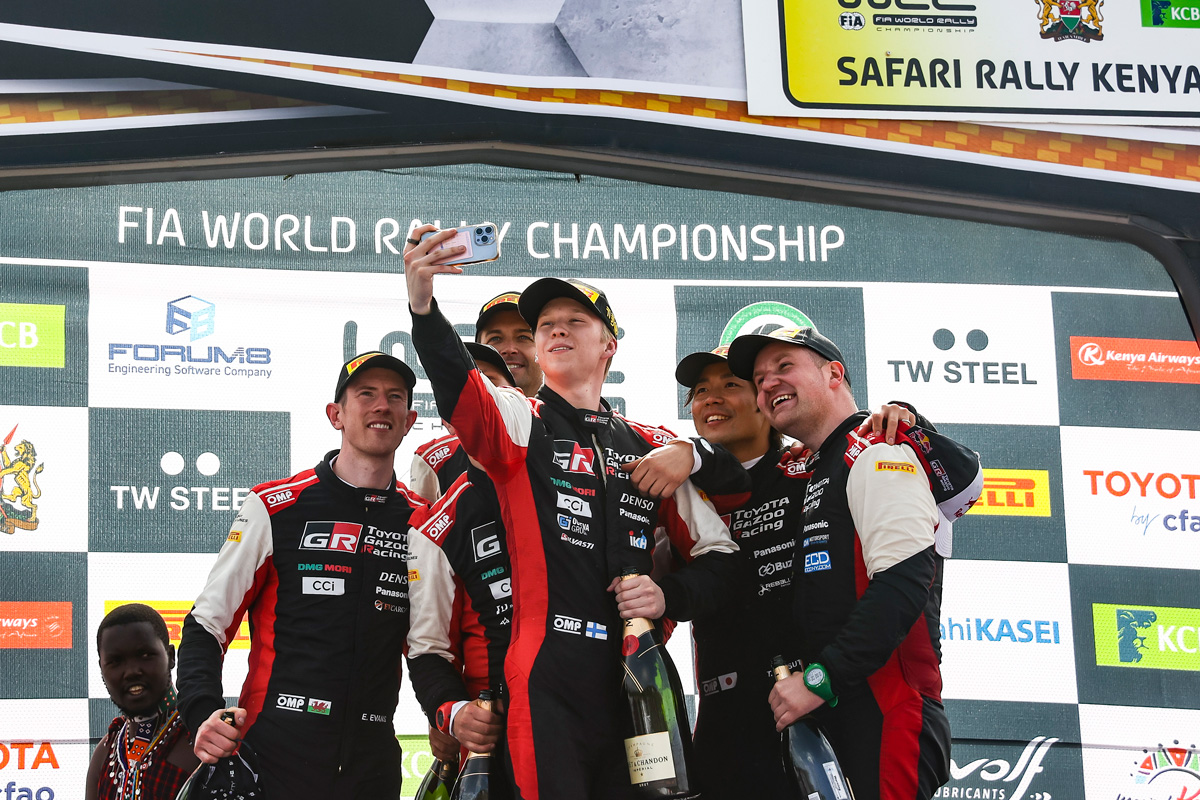 Kalle Rovanpera has continued his superb World Rally Championship form to lead a Toyota one-two-three-four at the Safari Rally Kenya.

Toyota entered the final day with the only four cars left in contention and had no slip ups from there, as Rovanpera was trailed by team-mates Elfyn Evans, Takamoto Katsuta and Sebastien Ogier.

To come through arguably the most gruelling rally of all with an extended 65-point lead atop the standings represents a stellar result for Rovanpera – especially after it all so nearly went wrong on the opening stage.

“This is a result that I don’t think we could have even imagined before the event,” said the #69 GR Yaris Rally1 driver.

“To have a top four that is all Toyota is something amazing and such a great result for the team.

“It was the hardest rally I’ve ever done, so to have all four cars at the finish with no big issues, it’s clearly the strongest and fastest car.

“For myself to get the win here like this in such a special rally is really nice. Thank you to the team, everybody did a great job. They are developing the car all the time which is important and that’s helping us to put some good results together.”

Added team principal Jari-Matti Latvala: “To achieve a one-two-three-four here at the Safari Rally is an exceptional result.

“It’s nearly 30 years since Toyota managed the same feat here in Kenya with the Celica and I can only thank our team and our drivers for the superb job they have done.

“When we were developing the GR Yaris Rally1 we focused above all on making a really strong and reliable car.

“This was really the most important thing on this event and the car has worked really well in such difficult conditions.

“Our drivers have also driven this rally exactly the way it needs to be driven, which is in a very smart way, and it was great to see them all thinking about the result for the team rather than their own personal ambitions.”

Best of the rest was Hyundai’s Thierry Neuville in fifth, more than 10 minutes off the lead.

The Belgian did manage some damage limitation by winning the power stage though to pick up five bonus points.

“We have achieved the maximum we could. Taking fifth place after all the trouble and mess we have experienced can probably be called a satisfying result,” he said.

“It has been a tough and challenging weekend, and this morning was no exception.

“Our focus was clearly on getting something from the power stage, which we managed at least.

“There’s not much more to say. The situation is obvious. I am really disappointed, not just for us but also for the mechanics, who have been working so hard, but like us don’t get the reward.”

“We knew going in that this rally would be a challenge, perhaps the biggest of the season in terms of ultimate durability,” said Millener.

“The conditions exceeded our expectations, especially the fesh fesh, which was effectively a lottery and perhaps a bit over the limit of what these new Rally1 cars can handle.

“Despite this, we have to look at the positives. These are new cars and we learned some very valuable lessons. The ultimate pace of the Puma was there, with both Seb [Loeb] and Adrien [Fourmaux] taking stage wins as well as having three cars claiming power stage points.

“It is the first time we have had three cars in the power stage points this season which is a very valuable step in the right direction.

“It’s a very difficult feeling to work so hard building up to an event and coming away with little to show in terms of results. We have a testing programme coming up next ahead of Estonia as well as a short turnaround at Dovenby so we are going to be flat out again, but keeping our heads high and looking forward to Estonia.”

Rally Estonia, Round 7 of the season, takes place across July 14-17.