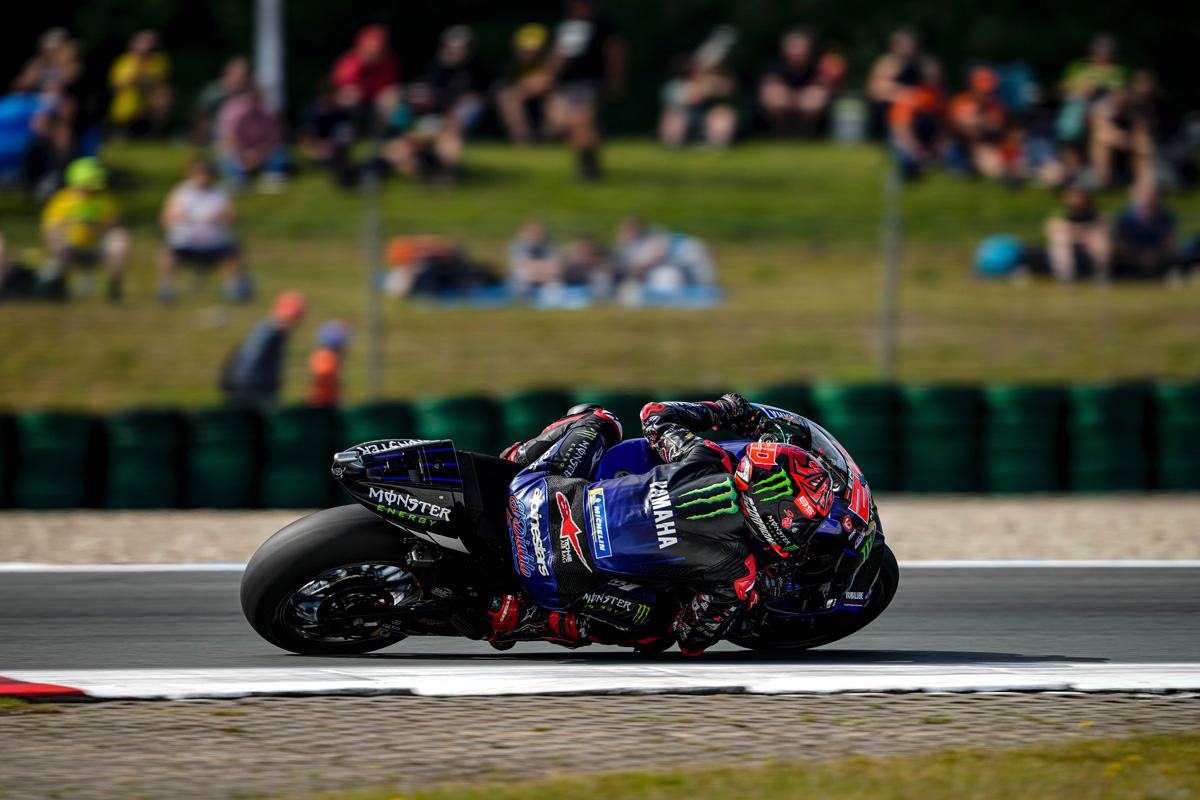 Fabio Quartararo will return from MotoGP’s summer break somewhat on the back foot after being sanctioned for colliding with Aleix Espargaro during the Dutch TT.

Quartararo’s attempt to reclaim second place from his chief title rival at Turn 5, Lap 5 went awry, changing the complexion of the race as Espargaro would be forced to recover from 15th while the championship leader himself dropped fully out of contention.

The #20 rider would crash again at the same corner eight laps later to end his race, as Assen proved a points-less affair for Yamaha (Franco Morbidelli and Darryn Binder also crashing out, and Andrea Dovizioso finishing 16th).

Making matters worse, Quartararo was penalised for the Espargaro incident, picking up a long lap penalty for the next race, the British Grand Prix, on August 7.

The stewards deemed Quartararo had been “overly ambitious” and “severely impacted” Espargaro’s race, although the Aprilia ace charged back through to fourth at the chequered flag.

That determination did not sit well with Monster Energy Yamaha team director Massimo Meregalli, it seems.

“We view the first crash of Fabio as a race incident and feel that Race Direction’s decision to give him a sanction for the next race is not only harsh considering he took nobody down with him and Aleix still scored points, but it’s also not consistent with race incidents we’ve seen in earlier GPs that were left unpunished,” he said.

“I made a rookie mistake,” conceded the 23-year-old, whose championship advantage has been slashed to 21 points.

“It was only the third lap and I attacked like it was the last one. It was totally my mistake. My apologies to Aprilia and Aleix for making him go out of the track. It was a race accident.”

Of the circumstances that led to his solo accident soon after, Quartararo added: “I came into the pits because I felt there was a problem, but the team told me to continue because rain was supposed to come. But we crashed again.

“I feel pretty lucky I haven’t broken anything. I could save the first moment, but as soon as I moved, I had another one and fell.

“I feel a bit sore in the shoulder. But it’s my fault, I could have done a better result than crash in the third lap and crash again later. I crashed only twice in the first 1- rounds of the season, and today I crashed twice in 10 laps.

“We spoke with the team before the race. The strategy was that if I was in front, I would push. If I was behind, I would try not to make any mistakes. But I did the opposite. Not something I would do on purpose. It was just a stupid mistake.”

The Dutch TT was won by Ducati’s Francesco Bagnaia, ahead of Marco Bezzecchi and Maverick Viñales.