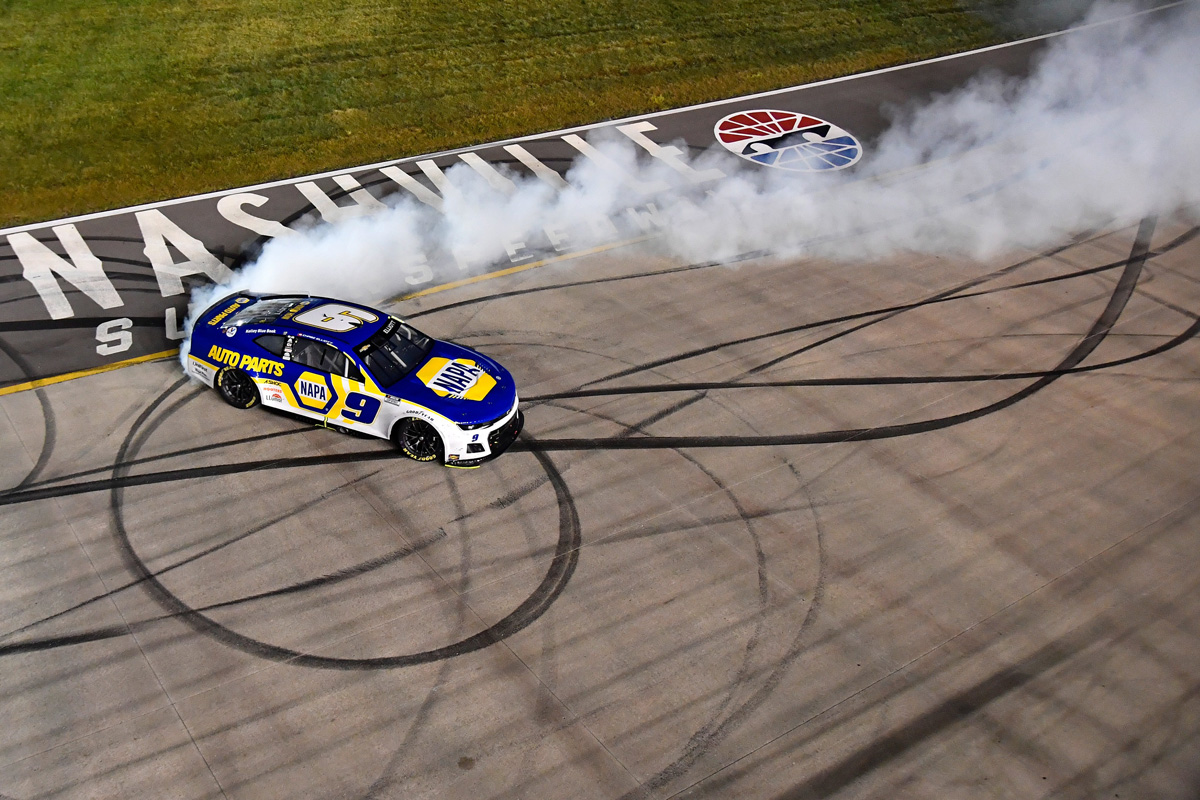 Numerous weather delays halted the race for up to three hours, with the NASCAR field finishing under lights in just the second outing at Nashville for the Cup Series.

Denny Hamlin lined up on pole, with long-time rival Joey Logano alongside him, but after the green flag dropped lighting in the area affected the running of Stage 1, with Martin Truex Jnr eventually getting the initial win, holding off team-mate Hamlin.

The race then went under red flag just shy of the halfway point, with lighting and then a heavy rain shower stopping the race for two hours.

The race went back green and Truex Jnr was able to take victory in Stage 2, beating Hamlin and Kyle Busch.

After leading Practice 1, Bubba Wallace showed good race pace, before yet again he had issues on pit road, with a loose wheel.

He would go one lap down and have to fight his way back through the field, eventually finishing 12th after another frustrating run.

After the rain delay, Elliott’s car only got better as he was able to battle with the three JGR Toyotas, and would take the lead on Lap 245.

With eight laps remaining, the caution came out for Josh Bilicki’s #77 car which suffered an engine issue.

With decisions mixed on late-race pit stops amongst the field, the Toyotas decided to pit for tyres, while Elliott decided to stay out, prioritising valuable track position.

Kyle Busch was best poised to win of those who pitted, restarting in 11th position with four laps remaining, but had a difficult restart, and fell to 21st position.

Elliott was able to beat Kyle’s brother Kurt Busch to the chequered flag, and claim his second win of the year.

Elliott and Kyle Larson, who finished fourth, would be the shining light at Hendrick Motorsports, with their team-mates Byron and Bowman finishing 35th and 36th respectively.

“Ryan [Blaney] gave me a great shove on that restart, I really appreciate him doing me a solid there and getting us out front,” Elliott said.

“So proud of our team and we had a setback there halfway, but we were able to get back in the mix, but a long but fun day.

“We’ve had a pretty rough month and a half, so it’s just so good to get back going in the right direction, and getting the win.

“We were able to work on the car during the rain delay and after the penalty, but we stuck with it.”

NASCAR returns next week to Road America as the race to get into the Playoffs continues.