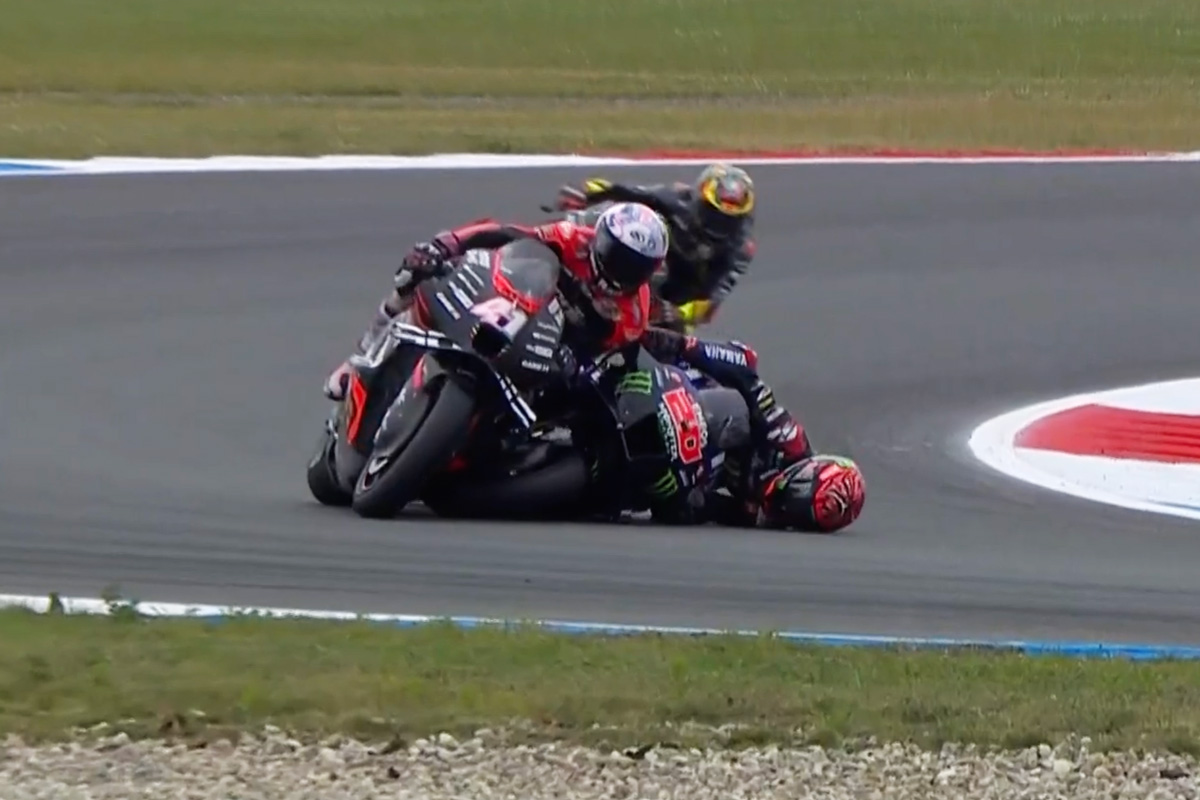 Francesco Bagnaia has converted pole position into victory at the Dutch TT but the story was all about a rare Fabio Quartararo shocker.

The Monster Energy Yamaha star’s bid for a second successive world title took a big hit as he crashed twice at Assen.

The first occasion, on Lap 5, was particularly high drama as he fired down the inside of championship rival Aleix Espargaro at Turn 5 in an effort to reclaim second, only for the pair to collide.

Espargaro managed to stay upright, but tumbled down the order to 15th, while Quartararo dropped his #20 and fell to last.

The Frenchman got back to the pits and soon returned to the track – but not for long, suffering a violent highside at the same corner eight laps later.

Quartararo limped away from the scene and by the time he’d made it back to the garage, was left to watch on as Espargaro scythed his way through the field to close the margin at the top of the standings.

From 15th, Espargaro made pass after pass to be eighth by Lap 16 of 26, and would go on to finish fourth, sealed with a stunning double overtake on Jack Miller and Brad Binder at the final chicane.

The recovery ride brings him back within 21 points of the lead as MotoGP enters its summer break.

Meanwhile out in front, Bagnaia never looked back after blitzing the start.

Desperate to bounce back from crashing out last weekend at the Sachsenring, Bagnaia managed his pace supremely, with not even some mid-race drops of rain that triggered white flags throwing him off. Making the most of the Quartararo/Espargaro drama was rookie Marco Bezzecchi, bringing his VR46 Ducati home second, while Maverick Viñales picked up his maiden Aprilia podium.

Viñales came under attack from Miller in the closing stages, the Australian launching a move at the end of the penultimate lap but unable to make it stick.

Having started sixth and dropped as low as 10th after serving a long lap penalty, Miller took the flag sixth, just behind Binder.

The rain drops did hinder Jorge Martin, who could only finish seventh despite running third through the middle phase of the race.

Remy Gardner was 19th of the 20 finishers.

Joining Quartararo in the DNF bracket was fellow Yamaha riders Franco Morbidelli and Darryn Binder who both crashed out, and Gardner’s team-mate Raul Fernandez who retired from the race with an apparent arm pump issue.

With the summer break now starting, MotoGP action does not resume until early August at Silverstone.