The AP4 Yaris which Coral Taylor steps into this weekend

Taylor, a four-time ARC champion alongside Bates’ father Neal, has been called on after regular co-driver John McCarthy was ruled out of the Shannons Rally Launceston due to COVID-19.

It’s been four years since Taylor competed in an ARC event, on that occasion filling in as co-driver for Harry’s brother Lewis, and she readily admits her prior seat time in the AP4 Yaris is minimal.

While excited for the challenge, it has been quite the “whirlwind” build-up without the usual pre-event preparation time.

“It came out of the blue because really for the last few years now my role has been on the other side of the fence,” she told Speedcafe.com.

“I’ve always been in charge of the logistical sort of planning and so forth that we do for rallies, but with Harry and Lewis driving, I sort of stayed more on that logistical and managerial side and hanging in service park and not stepping in the car.

“I was already in Melbourne to chuck some cars on boats and head over in that role when John rang to say he wasn’t going to make it, so it was very last minute.

“As a co-driver I would have spent the last week at home planning a recce schedule and cutting and shutting notes and all of those sort of things, so none of that happened.

“So my night on the Spirit of Tasmania was, I actually got some scanned copies of John’s notes from last year and I was doing a bit of re-writing and that’s how it has sort of been on the run ever since.”

Taylor did report a productive Friday recce, and noted there was a mix of emotions on the eve of the event proper getting underway today, as Bates looks to protect or extend his 69-point championship lead. 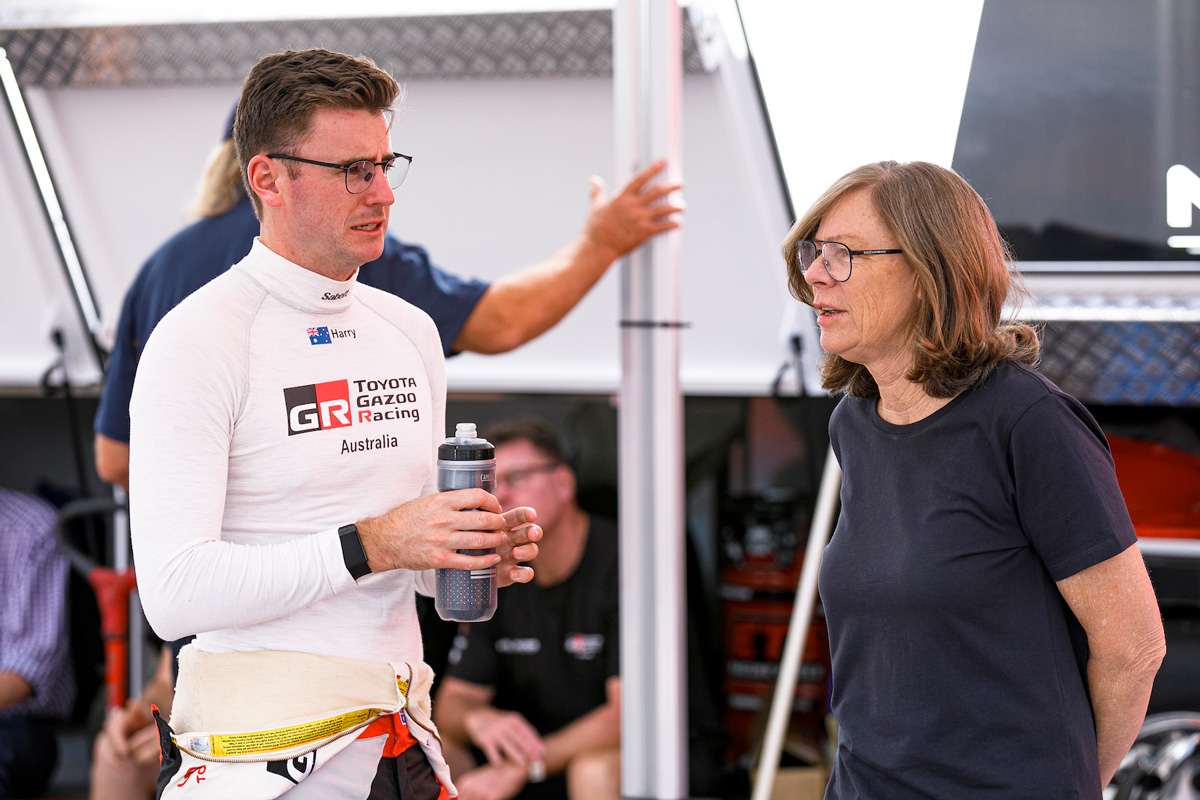 “Right at the moment I’m feeling reasonably relaxed but certainly there is some nervousness about it,” she said.

“It’s really excitement and a bit of nervousness all at the same time.

“We had a really great recce, so you get back into the swing of things, and when you have done this stuff for so long, you sort of know what you’re doing.

“But having said that, this next generation have really stepped it up from the heyday of when Neal and I were competing – the work they do with their recces, and recce videos, and so forth.

“We were a little bit more chilled about all that stuff, so the workload is quite heavy, and Harry’s note system is quite different from what Neal and I did.

“So that’s the first thing, is to really just get your head around… I’ve had such a long-term career with Neal that we’re fairly set in our ways and know what we do the way we do it, which is quite different from how Harry does it.

“So there’s a lot the same and a lot that’s different, and you kind of know what you’re doing but you’re dealing with a new set of notes, a new car, everything has moved, everything is very fast.

“Harry is very fast as a driver, so it’s part of a big step up. And also John who has been co-driving with Harry does a really sensational job, I always look at their in-car after events and think John’s doing a great job, so suddenly it’s like ‘I’ve got big shoes to fill here!’”

There are 17 cars in the ARC field for this weekend in Launceston.