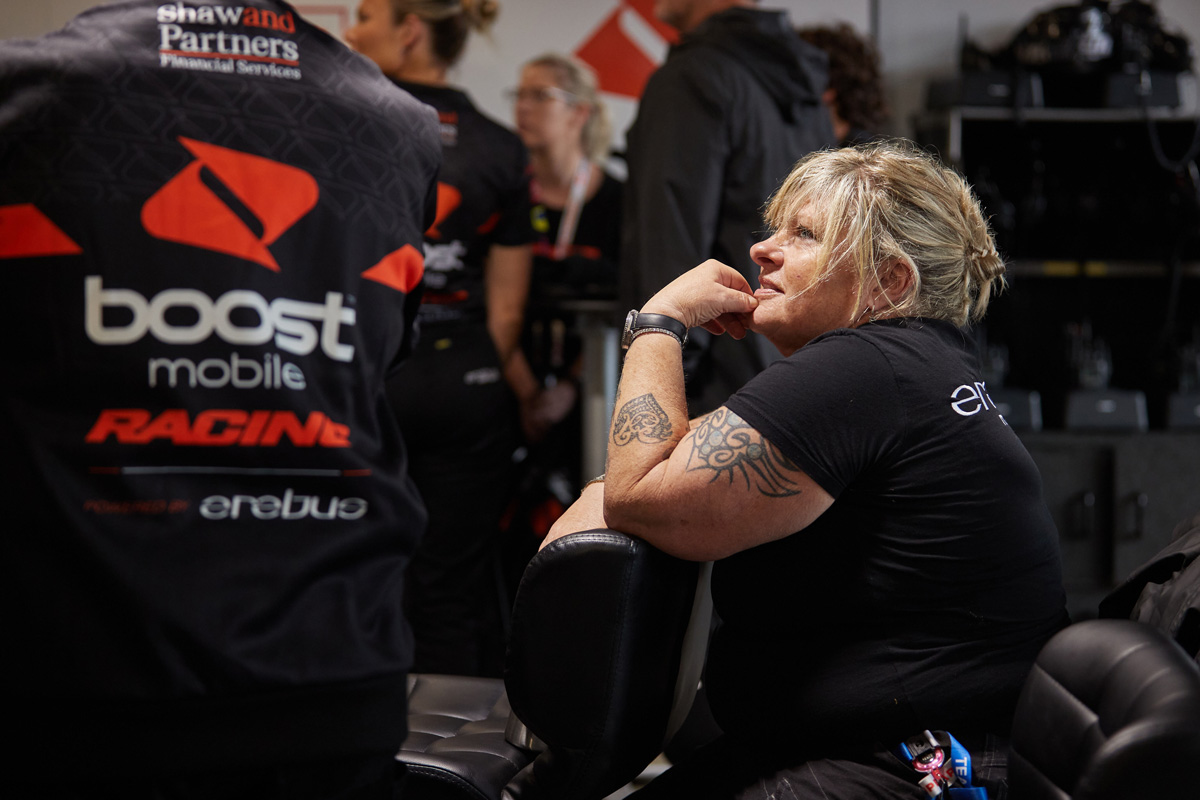 Dressed all in black, tattooed, and sporting a striking pink hairdo, few could have thought Betty Klimenko was Supercars’ newest team owner on the grid back in 2013.

It’s been nearly a decade since Klimenko shook up the Supercars paddock, arriving at the Adelaide 500 with three screaming Silver Arrows.

The world of business had taught her to be bold and brash, to stand out from the crowd for anyone to take notice – and that they did.

Nowadays, Klimenko cuts a more mellow figure. Softened by the toil of nearly 10 seasons of competing in arguably the most competitive touring car championship the world over.

“That’s how I was back then, that’s the person I was, I was basically an old goth and that’s how I always dressed,” she told Speedcafe.com

“I was very intimidating. I see in hindsight how intimidating I was, but that was me, because I come from a world of business and a world where the men were very powerful and to be heard in that forum, in construction and building, you had to be intimidating and loud.

“I’m short, I’m blonde, nine out of 10 times they thought I was a secretary and ask me for coffee. I had to be intimidating. I tried not to bring it onto the track, but sometimes it just snuck in there.”

Erebus Motorsport came into Supercars as a somewhat known quantity.

The year of their maiden Mount Panorama win, the team joined Supercars having taken the reins of what was Stone Brothers Racing.

Like her GT3 team, Klimenko opted to go with Mercedes machinery. Success in the sports car scene held ambitions high, though it would be a largely unsuccessful tenure with the E63, netting just two wins in what was an otherwise lacklustre three-year spell.

In motorsport, most of the time is spent losing, and Klimenko is the first to admit it taught her how to be humble.

“As far as the Mercedes goes, yes, I was very naïve,” explained Klimenko, who was earlier this month made a Member of the Order of Australia (AM).

“Everyone thought we’d go out there and blitz the field. No, we didn’t. That’s where I learnt that you can lose a lot. Not just lose once or twice and then win, no, you lose a lot before you even get close to winning.

“That’s why Winton holds a special place in my heart. That first first with Lee Holdsworth. I’ve still got that trophy in my house and it’s always where I can see it to remind me that that is the pinnacle of hard work in the sense that you’ve got so much against you, but you can still do it.

“I think everyone, their first year they’ve got stars in their eyes and then the stars twinkle out a little bit and they see the reality. There are 25 cars and only one is going to walk away with the win at the end of the race. That’s why you learned to be rejected.

“I think that’s what I needed in my life, to learn how to accept the fact that I’m not first, the fact that I didn’t win. The golden rule is he who has the gold rules, but here it doesn’t matter.

“I spent two years coming last in the Mercs before we went to Holden and it taught me how to be a bit more humble and accept the downside.

“No one cares about second and third, it’s who came first.

“I did find out that there were a lot of things I had to work on. Motorsport helped me do that. It made me bite my tongue a little bit more and put on a different pair of big boy pants.

“Everyone thinks they’re going to come in here and change the world, and you realise you can’t, and you’ve got to learn what it’s like to come last, what it’s like to be in the garages down the back, and you work your arse off to get your garage past the passport point – I call it the passport point – and there will be years when we end up down the back again and there will be years we’re up the front.” 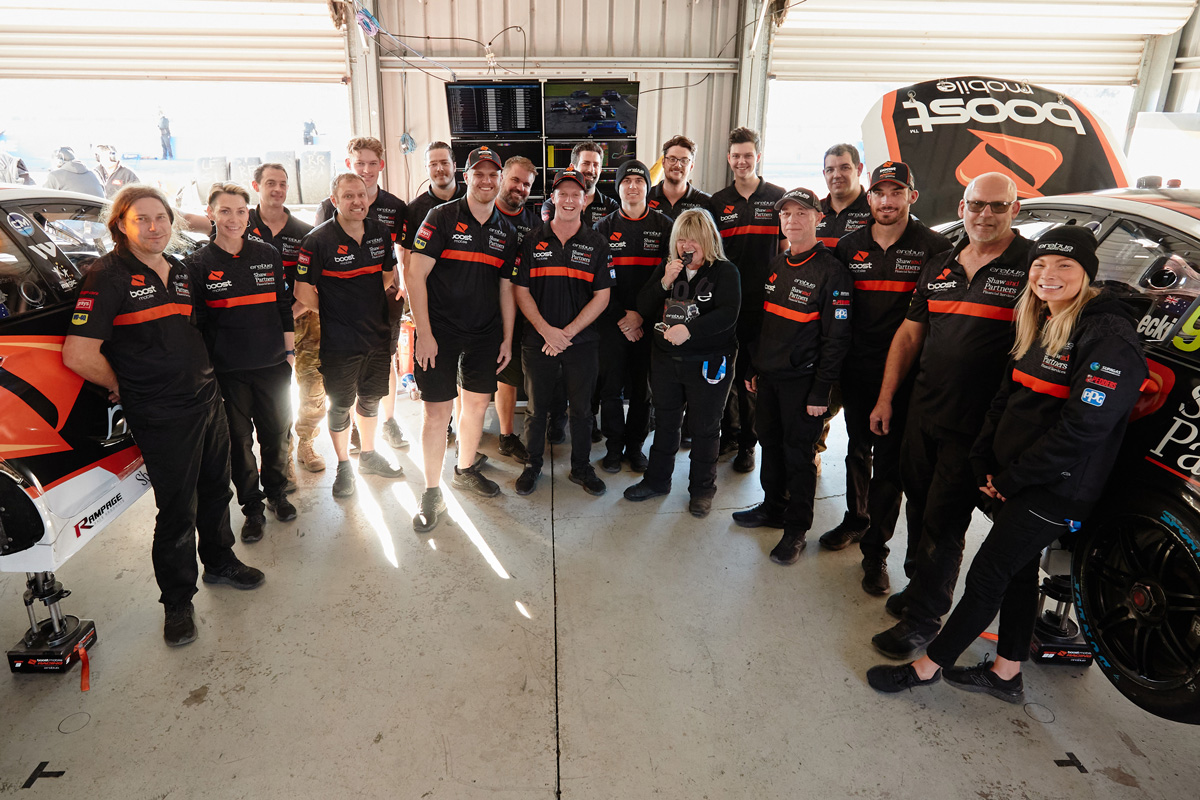 This year is Erebus Motorsport’s 10th season in the Repco Supercars Championship.

At the Winton SuperSprint, the team celebrated its 300th race start.

Since 2013, Klimenko said attitudes have changed towards her. Now, she feels much more part of the furniture of Supercars.

“For me, every time I get to that something special, it’s a milestone. I remember it because when I started it was very much a boys club.

The ultimate success, winning the Supercars title, is still some way away. The team did experience the high of a Bathurst 1000 triumph in 2017 with David Reynolds and Luke Youlden, before enduring a particularly rocky period three years later.

Young guns Brodie Kostecki and Will Brown have brought the team renewed hope that it might be regular contenders soon enough, however.

For now, Klimenko is content to grind and continue the journey with her Erebus Motorsport family.

“I’m glad that motorsport came into my life, and I’m glad I followed the path because it’s brought me so much happiness, so much joy, and so much heartache – a lot of heartache,” she laughed.

“But between the fans and the team and everything else, there was a lot of joy that you could never get from anything else. You can’t get that feeling.

“These people don’t know who I am, they just like me because I’m me, not because I’m someone’s daughter or have something that they don’t, and they’ve never held it against me – and I love it.

“I love the fact that I’m not your typical eastern suburbs girl and that I can enjoy coming and sitting in the smell of ethanol and grease. I love that.