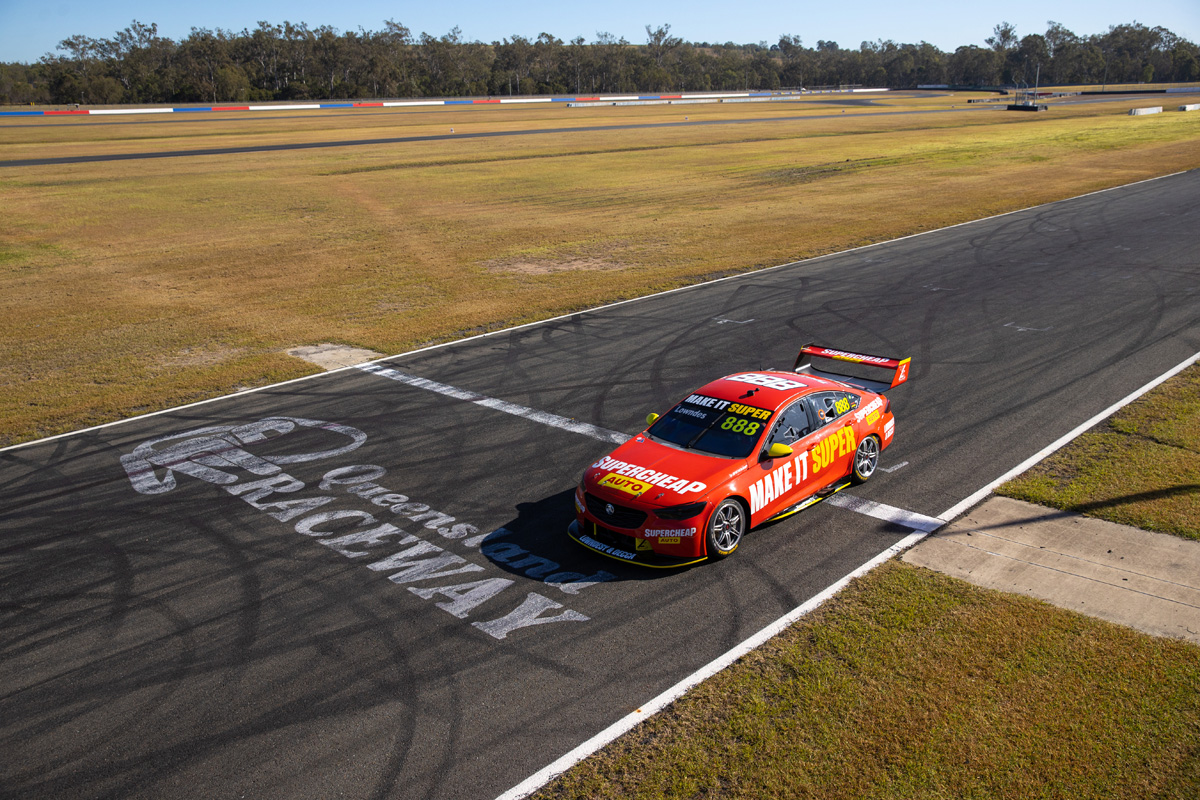 Declan Fraser and Craig Lowndes were out on track at Queensland Raceway. Picture: Dirk Klynsmith

The first Supercheap Auto wildcard test day has ended a run of sleepless nights for Declan Fraser in the excitement of the build-up.

Fraser and Craig Lowndes got their first of three test days at Queensland Raceway today in preparation for the Bathurst 1000 with Triple Eight Race Engineering.

It was the first opportunity for the pair to work together in the setting of a race track, with a focus on ergonomics and driving technique.

For Fraser, the excitement in the lead-up to the first test brought on some sleepless nights.

“[I’ve had] sleepless nights because I was just so excited to get out here,” the 21-year-old told Speedcafe.com.

“It’s my first time in a ZB [Commodore] so it’s pretty cool.

“Out here with Supercheap Auto and Triple Eight it’s been a cool day so it’s just more about finding the ergonomics between Craig and I, and building on race runs [and] getting used to it all.”

Lowndes worked closely with Fraser across the first part of the day on improving technique, which enabled the Dunlop Super2 Series front-runner to extract more speed.

“Just the different techniques with the braking and stuff,” Fraser explained.

“There’s a lot that Craig has already shown me in the way he communicates and portrays different set-up changes when it’s needed.

“It’s just really cool to hear that different side of the way people operate. I wouldn’t say it’s circuit-specific, it’s a lot that you can put into practice everywhere.

“The braking technique that he uses was a little bit different to mine so I’ve tried that and it seems to be working pretty well.” For Lowndes, it was like returning home in what will be his fourth consecutive year co-driving at the Bathurst 1000 since retiring from full-time Supercars racing.

“For me, everything is all familiar, all the buttons and [the] dash is all in the same place,” Lowndes told Speedcafe.com.

“We’ve done a quali sim and we’ll do a race run and a few things just so we get familiarised again with looking after the tyre and everything I grew up doing.

“It’s just great to be back in the car and so far Declan and I talk the same language, the way we feel the car, the way we register the car.

“So that’s a good thing. Ergonomics are very similar so that’s another big tick for us.”

Lowndes expanded on the development of Fraser’s technique across the day, saying that the youngster’s open-minded approach to learning is a major plus.

“[We’re] just trying to get him to carry more mid-corner speed because the ZB over the [VF] has a little bit more aero,” Lowndes explained.

“So just getting him to be confident and comfortable that he can release the brake a little earlier and carry that mid-corner speed and the car will do it.

“Until you get to feel it, it’s one of those things, even for me, you see it on the data you know the car can do it so you’ve just got to go out and teach yourself to do it.

“If we can help fast-track some of that, as I said, he learns very quickly and the good thing is he’s willing to adapt and change his style.

“Even through Turn 5 he was pitching the car too much instead of trying to flow it more and he picked up two or three tenths just in that style.”