Nine Antipodeans have been confirmed for next month’s TotalEnergies 24 Hours of Spa, with the Groves releasing their livery.

A total of 65 cars are on the entry list for the 74th edition of the race, which forms part of the Intercontinental GT Challenge (IGTC).

Supercars team owners Stephen and Brenton Grove will share the #16 with Matt Payne and Adrian D’Silva.

The Grove’s Porsche 911 GT3 R, the same chassis that competed at the Bathurst 12 Hour, is being run by Earl Bamber Motorsport.

It features ‘Skippy’ the boxing kangaroo on both sides, something that has become customary to the father-son duo’s Porsche’s liveries.

Bathurst 12 Hour winner Kenny Habul will continue his IGTC charge off the back of his Mount Panorama success in May. 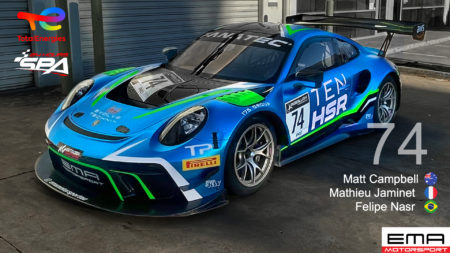 The Australian is set to share the driving duties aboard his SunEnergy1 Mercedes-AMG GT3 with Martin Konrad, Philip Ellis and Dominik Baumann.

Australian squad EMA Motorsport is also on the grid with Matt Campbell joining Mathieu Jaminet and Felipe Nasr in a Porsche 911 GT3 R.

Also out of the Australian one-make series, Jordan Love is listed in a Mercedes-AMG GT3 for Haupt Racing Team.

New Zealander Brendon Leitch is the other notable in a Lamborghini Huracan GT3 Evo fielded by Leipert Motorsport.

A two-day test is taking place this week, having kicked off on Tuesday and finishing up on Wednesday (local time).