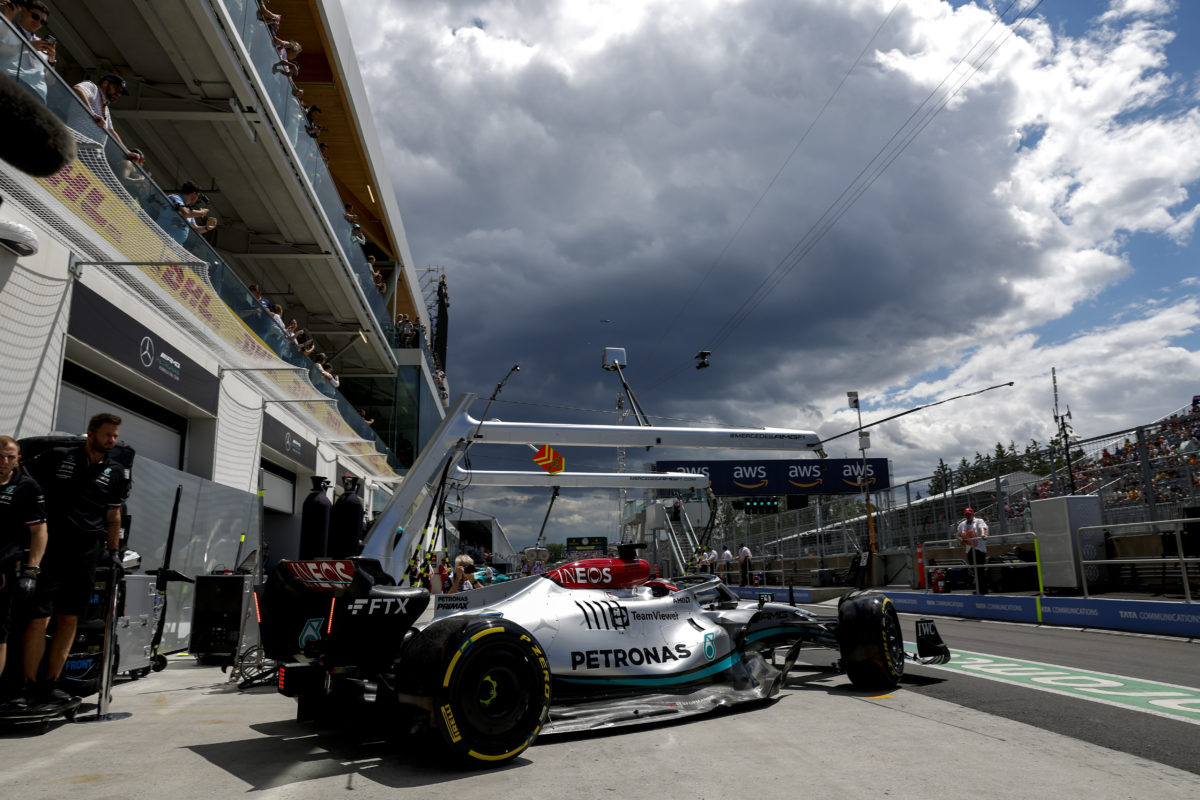 A number of senior figures in the Formula 1 paddock have raised concerns with the way the FIA introduced a technical directive designed to address porpoising.

A document was issued to teams in the lead-up to last weekend’s Canadian Grand Prix as the sport’s governing body looked to address concerns around the ride quality experienced by drivers.

Over the course of the Azerbaijan Grand Prix, a number of drivers complained about the physical toll the phenomena was taking on them, with Lewis Hamilton arguably worst affected.

The seven-time world champion struggled to climb from his Mercedes in Baku after taking repeated 10G impacts during the course of his race.

In response, the FIA issued the directive which made two points.

Most simply, teams were allowed to fit an extra stay to their floor in an effort to stiffen it, while it also plans to introduce a vertical acceleration limit.

That saw Mercedes run a second stay on its floors on Friday, only to remove it for Saturday after it was announced the directive would be delayed.

However, that last year’s constructors’ championship winners had been able to fit a stay at all, given the tight timelines involved, raised eyebrows in a number of garages in pit lane.

“The timing of the TC was not really ideal, because you have all the team travelling, everything is on-site,” explained Aston Martin’s Mike Krack.

“Then, yes, you can react, but you need to be really sure what you’re doing, or you need to know up front what this will do.

“I think in such a situation, you have to take a conservative approach and then look for it for the following race.”

“To send out a technical directive a few days before the race is, for sure, not the best,” he said.

“Especially the floor of a Formula 1 car is a very sensible part, it’s not just to put any parts on it without investigations.

“We, from Scuderia AlphaTauri, have to find out what we do, which direction we will react to the technical directive regarding now the stiffening of the floor or whatever.

“And this takes time. We will for sure not do it here [Canada], and then we will see what we can arrange for Silverstone.”

Otmar Szafnauer, the man in charge at Alpine, suggests his team would be able to react with a second stay by the British Grand Prix, but could not do as Mercedes did and have something in place within 24 hours.

“We’ve chosen to stiffen the floor in that area, at the expense of weight,” Szafnauer explained.

“As we all discuss, there’s some cars that are still overweight, and that’s a trade-off decision you make between adding weight to the car so you can stiff the floor.

“If you’re just given a stay, then you don’t have to add the weight and do the same job.”

The inference was that Mercedes somehow knew about the contents of the technical directive before its rivals and was therefore able to react more quickly.

With the topic having become something of a political sticking point, it prompted Mercedes boss Toto Wolff to argue it was a clear move on the FIA in the interest of driver safety.

“I think really the political manoeuvring that has been doing on doesn’t consider what is at the core of this topic,” he said.

“At the core of this topic is that, since the beginning of the season, race drivers have been complaining about pain to drive these cars.

“Back pain, blurred vision, we’re talking about micro concussions and people giving their feedback in literally every team – I think just [from] Alfa Romeo and Williams, I haven’t heard anything.

“In all the other teams, drivers have referred to the topic and this is something we just need to take whatever the solution is, whatever technically can be implemented, to go in that direction.

“We need to be aware that this is not about cutting a winglet that is an advantage for our team, or double diffuser, it is that all of us team principals have the responsibility to not take this lightly.”

However, Ferrari’s Mattia Binotto disputes that, suggesting there are mechanisms in place for changes on safety grounds.

Furthermore, the Italian suggested that the FIA had broken its own governance procedures with the way the directive was introduced, making it effectively null and void.

“As far as what’s our position? For us, that’s TDs are not applicable, and it’s something we mentioned to the FIA,” Binotto told accredited media, including Speedcafe.com, on Sunday.

“The reasons they are not applicable [is] that a TD is there to clarify regulations, or TDs are to somehow address policy, but a TD is not there to change regulations.

“You cannot change the regulations through a TD, and that’s governance.

“But you do not change regulations with a TD, so that’s why we sent that to FIA.”

While Binotto was the most outspoken, there were suggestions that Mercedes could face protests should it have opted to field the second stay in Sunday’s race.

As it was, with the technical directive’s introduction deferred, the squad removed the second stay.

The matter is now set to be discussed prior to the British Grand Prix in the hope of landing on a solution acceptable to all teams.