Verstappen sees off late Sainz charge to win in Canada

Verstappen sees off late Sainz charge to win in Canada 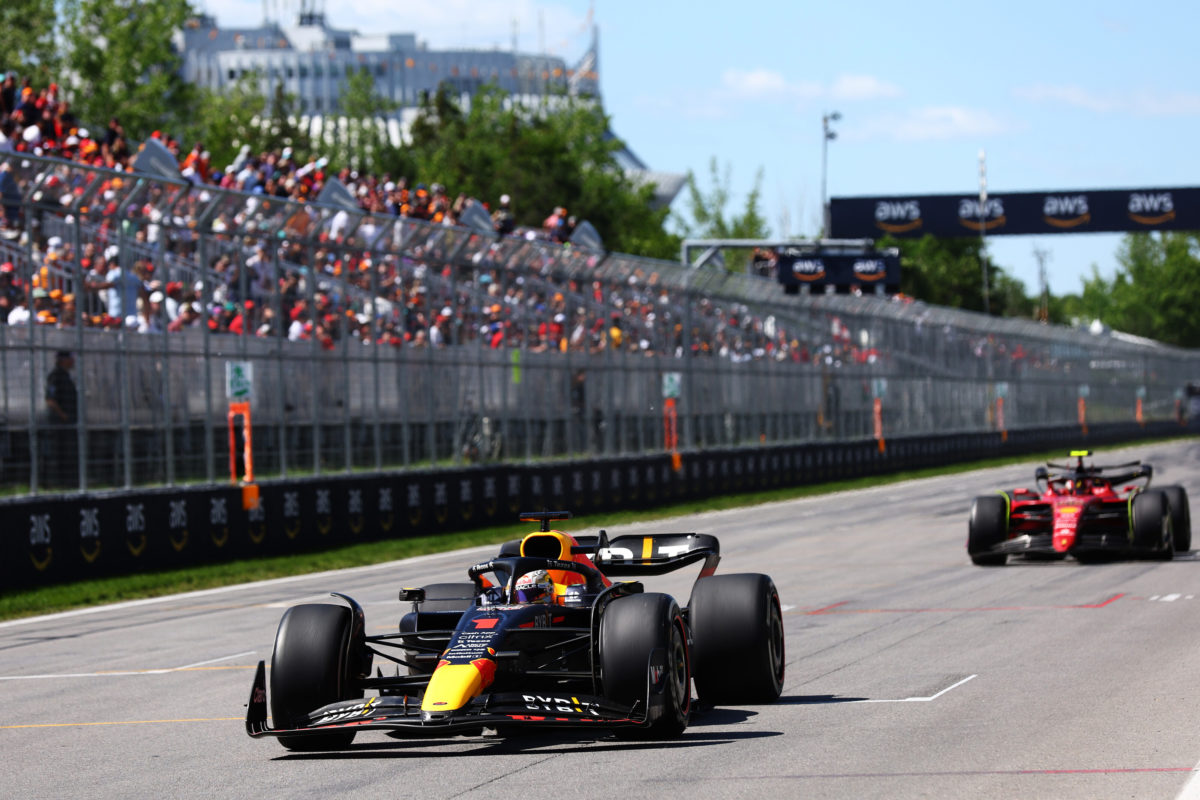 Max Verstappen has claimed a narrow victory over Carlos Sainz in the Formula 1 Canadian Grand Prix.

An enthralling battle in the final 15 laps saw Verstappen fend off the advances of the chasing Ferrari to win by less than a second.

Third place went to Lewis Hamilton, his second podium of the season, with George Russell fourth over Charles Leclerc, who raced from 19th following his power unit penalty.

At the race start, Verstappen headed off the threat posed by Fernando Alonso into the opening corner to take a clear lead, Sainz slotting in third while Hamilton and Kevin Magnussen went wheel to wheel into Turn 3.

The Brit held on, Magnussen remaining fifth as Esteban Ocon improved to sixth at the expense of Mick Schumacher in the opening corners.

The Haas driver lost another spot at the hairpin as Russell put a move on the German to climb up to seventh.

In the pack, the opening lap saw both Sergio Perez and Leclerc climb two places, the duo finding themselves 11th and 17th respectively.

Sainz made comparatively short work of Alonso, moving by on Lap 4 as the Alpine began the predictable slide down the order.

Russell continued his march forward when he passed Magnussen, the Dane shown the meatball flag as he completed Lap 5 for front wing damage, sustained on the opening lap in his battle with Hamilton.

The Dane had been sixth and fell to last by the time he resumed with a new wing.

As he did so, Perez struck trouble with an apparent transmission issue, the Mexican rolling to a halt at Turn 8.

The Virtual Safety Car was called for, Verstappen taking the opportunity to pit, as did Hamilton.

Sainz remained on track, inheriting the lead as a consequence on Lap 10 over Alonso, with the former leader rejoining in third.

The Virtual Safety Car interruption lasted barely more than a lap before the field was released once more.

It left Sainz with a 1.4s advantage over Alonso, who was 4.9s ahead of the fresh-booted Verstappen.

By Lap 15, Verstappen had caught Alonso for second, the Red Bull driver easily completing the move on the long back straight.

Alex Albon dropped two spots in quick succession, Valtteri Bottas finding a way through into the final chicane while Leclerc out dragged him on exit to drop the Williams from 10th to 12th in two corners.

A second Virtual Safety Car was called when Schumacher stopped at Turn 8 on Lap 19.

It was timed perfectly for Russell to box, dropping behind team-mate Hamilton as the Mercedes drivers swapped fourth and fifth places.

Sainz also took to the lane, emerging third but only narrowly ahead of Hamilton.

Sitting second, Alonso was yet to pit and was predictably easy prey for both Sainz and Hamilton, who boasted much fresher tyres.

The Spaniard finally took service at the end of Lap 28, bolting on a set of hards as he rejoined in seventh behind Leclerc.

After 30 laps, Verstappen held an 8.2s advantage over Sainz, the Ferrari driver slowly reeling in the pole sitter.

Hamilton was 6.4s back in third with Russell fourth, then came Ocon with Leclerc in sixth, who was one of just three drivers still yet to stop.

Traction issues were hindering Leclerc’s progress, the Monegasque unable to get close enough to the Alpine ahead out of the hairpin to make a move stick.

Ferrari finally called him into the lane on Lap 42, though a slow 5.3s stop meant he fell to 12th, and emerged in traffic.

Verstappen pitted for a second time next lap, taking on a new set of hard compound tyres as he rejoined alongside Hamilton.

The Mercedes driver got the upper hand, even if it would ultimately prove to be comparatively brief, the Red Bull driver using DRS to ease by on the back straight as Hamilton headed to the pits.

It left Sainz with a 10.8s advantage over Verstappen in the lead, Russell in the final podium place 7.2s further back.

That was until Mercedes pitted the Englishman, returning Hamilton to third following his stop a lap earlier.

On Lap 49, Yuki Tsunoda stopped at Turn 2 to draw the Safety Car, the Japanese driver understeering straight off as he exited the pit lane.

It was near perfectly timed for Sainz, who gave up the race lead to pit for fresh tyres.

Many others did likewise, including Alpine which double-stacked its two drivers, Ocon remaining ahead of Alonso.

The Safety Car was withdrawn at the end of Lap 54, Verstappen leading from Sainz, Hamilton, Russell, Ocon, Alonso, Leclerc, Bottas, Sebastian Vettel, and Guanyu Zhou in the top 10.

Verstappen worked hard to extend an advantage at the restart but was unable to escape DRS range by the time it was enabled.

While in range, the Ferrari wasn’t close enough to immediately launch an attack.

Behind them, Leclerc was able to put a move on Alonso at the hairpin on Lap 58, the Alpine driver not mounting a defence.

Two laps later, the same move snagged fifth from Ocon, after an attempted at the final chicane the lap prior proved unsuccessful.

The leading duo remained locked together, Sainz enjoying DRS on most every lap but never close enough to do more than try to distract the leader into a mistake.

None was forthcoming, Verstappen hung on to take a narrow victory over Sainz, while Hamilton in third equalling his best result of the season.

Russell was fourth while Leclerc recovered from 19th to fifth, behind the Ferrari was Ocon over an impatient Alonso, then the Alfa Romeo Sauber pairing of Bottas and Zhou, while Lance Stroll rounding out the points paying positions.

Ricciardo was 11th, the Australian without pace in the final laps as he slipped out of the points, though faring better than team-mate Norris who was 15th at the flag.