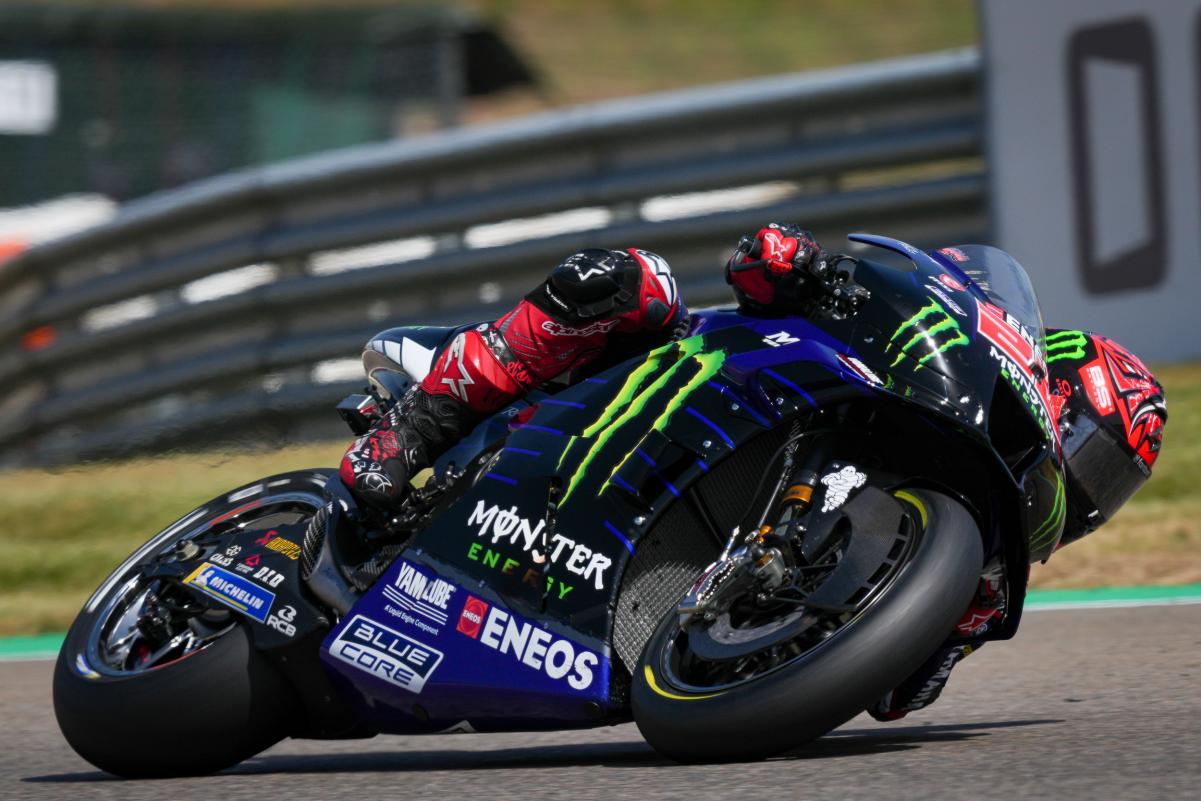 Fabio Quartararo has taken a stranglehold on the MotoGP title race after winning the German Grand Prix as Francesco Bagnaia crashed out and Jack Miller claimed an unlikely podium.

Bagnaia had qualified on pole at the Sachsenring but Quartararo (Monster Energy Yamaha) outbraked him at the first corner to take the initial lead, and was forceful in criss-crossing the Italian when he thought he had made the pass a lap later.

Then, in what seemed to be a pressure mistake, Bagnaia dropped his Desmosedici at Turn 1 on Lap 4 and he was out of the contest, a hammer blow to his title hopes.

There was a setback also for Ducati Lenovo team-mate Miller when the Queenslander served a long lap penalty on Lap 5, a punishment he was hit with after crashing under a yellow flag in practice.

Having inherited fourth spot as a result of Bagnaia’s spill, Miller himself nearly went down on the dirty track surface in the penalty loop before resuming in seventh.

He made light work of Jorge Martin (Prima Pramac Ducati) and, once he had also cleared Fabio Di Giannantonio (Gresini Ducati) on Lap 12, ‘Jackass’ quickly moved up towards the two Aprilias.

Maverick Viñales was fourth at that point but ran well wide on Lap 18 at Turn 8 and handed the spot to Miller.

As it turned out, the rear ride height device on his RS-GP had become stuck and he would soon retire from the race.

Quartararo’s lead was more than two seconds at that point while Johann Zarco (Prima Pramac Ducati), who had overtaken Aleix Espargaro on Lap 2, ran in second place with an even bigger margin over the sole remaining Aprilia rider.

Quartararo got as much as 5.4s to the good before cruising to a 4.9s victory, his second in a row, with Zarco on his lonesome as he racked up another podium.

The fight for the final step of that podium was genuinely contested, however, with Miller twice firing his Ducati down the inside of Espargaro’s Aprilia at Turn 1, only to fail to stick the move when he ended up too deep.

However, then the Spaniard, who was wanting for rear grip, also ended up wide of the line on Lap 28 and #43 did not waste that chance.

Only one of the Hondas made the chequered flag and that was Stefan Bradl (Repsol Honda) in 16th, meaning no points for the marque which had enjoyed a stranglehold on the Sachsenring courtesy of the currently injured Marc Marquez.

Quartararo looks more and more like joining Marquez as a multiple world champion given he is now more than a full race clear at the top of the points table with 10 rounds down and 10 to go.

Espargaro is 34 points back in second and Zarco 61 points or more than two full races in arrears in third, while Bagnaia is tied with Miller in sixth position at 91 points off the pace.

The Dutch TT takes place at Assen next weekend (June 24-26).