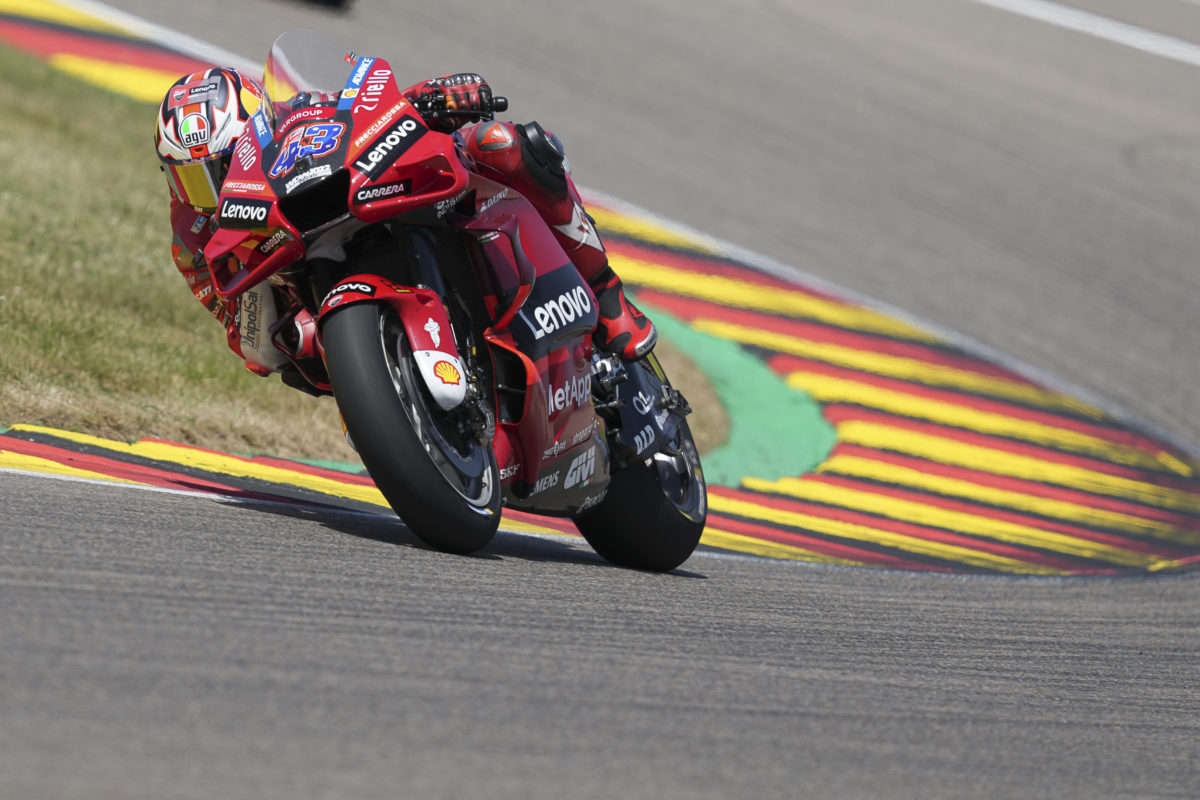 Jack Miller has explained exactly how he finally managed to prise third position away from Aleix Espargaro in the closing laps of the German MotoGP.

The Ducati Lenovo Team rider finished on the final step of the podium after passing Espargaro at the start of the third-last lap around the Sachsenring.

Miller had twice lunged down the inside of the Aprilia at Turn 1, on Laps 23 and 26, but on each occasion, he ran long and exited behind it again anyway.

It was then something of an irony that Espargaro got in deep at that same corner on Lap 28, opening the door for the Queenslander to march on through.

According to Miller, he was having a hard time trying to deal with the drive of the RS-GP back at the other end of the main straight and, those unsuccessful attempts notwithstanding, decided to largely bide his time.

“With the Ducatis, it wasn’t too bad to pass them at Turn 1,” he said.

“I fired it up the inside [of Espargaro] a few times from a long way back but wasn’t able to get the job done,” added ‘Jackass’.

“He was really parking it at Turn 1, going deep and squaring it off, and also, he was getting great drive out of the last corner.

“Once I got through on him, I had a bit of tyre left, and was able to get back to my pace and pull away from him.

“I saw Johann [Zarco, eventual runner-up] coming towards me but it was a little too late, but no, awesome race.”

Making the grand prix all the more awesome for Miller was that he finished third despite having to serve a long lap penalty for crashing in a yellow flag zone in practice.

He took his medicine on Lap 5, and nearly dropped his Desmosedici through a penalty loop which had been left dirty by an earlier crash at Turn 1 for Joan Mir.

The sanction relegated Miller from fourth to seventh at the time, before he got back ahead of Jorge Martin and Fabio Di Giannantonio with relative ease, then inherited fourth spot when Maverick Viñales’ Aprilia ended up with its rear ride height device stuck on.

“Thirty laps around here is always pretty gruelling anyway, and then when you have a track temp of 55 degrees [Celsius], and the heat off these bikes coming through the field is so hot…

“With the long lap penalty, I knew I had to get a good start and I didn’t do that, so it was kind of like the first objective was gone.

“But, I was able to get through on Fabio, able to get a lap-and-a-half alone to sort of try and stretch out as much as I could before having to do the long lap.

“I left it ‘til the last moment, did the long lap; it was probably one of the dodgier moments of the race.

“There were a fair few stones on the track throughout the long lap area, and [I] nearly lost the front, but didn’t lose too much time.”

With team-mate Francesco Bagnaia crashing out of the race while running second on Lap 4, he and Miller are now level on championship points although it is the Italian who is ahead, in sixth position, by virtue of his two wins this year.