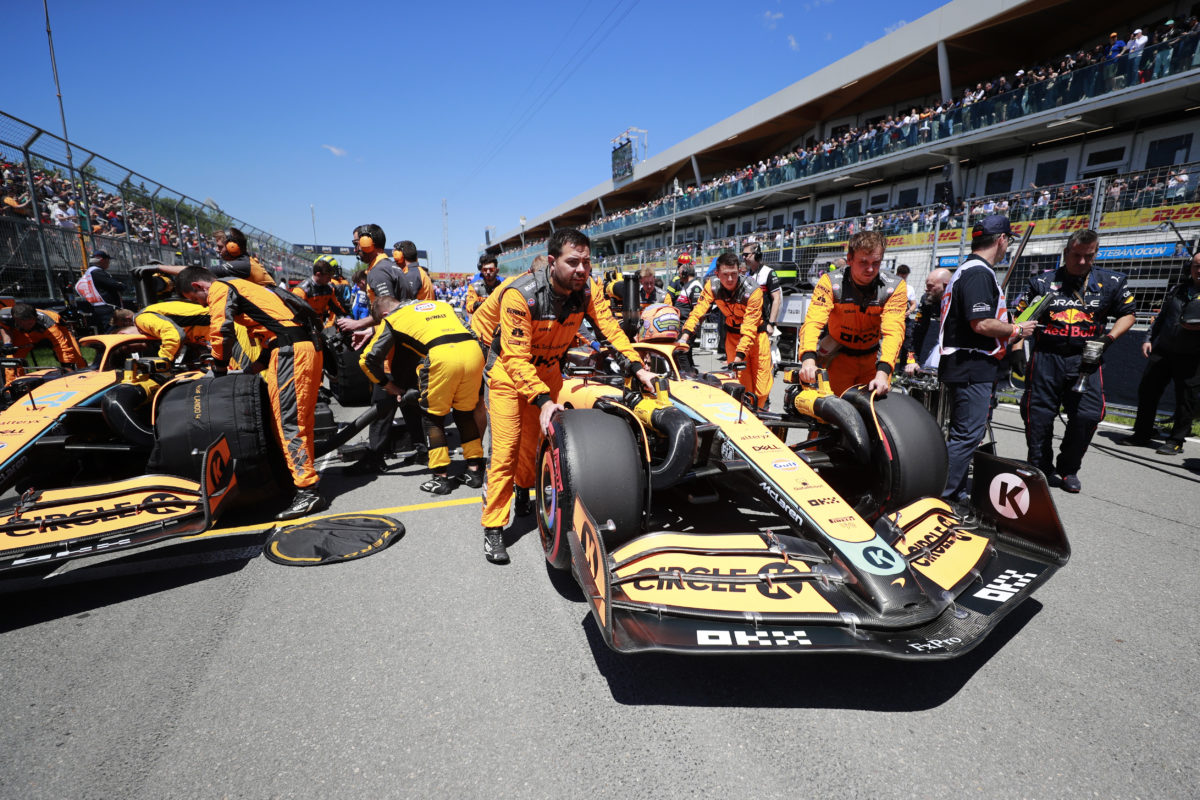 McLaren failed to score points with either car in Canada

McLaren ended the Formula 1 Canadian Grand Prix outside of the points after its drivers were forced to nurse their cars to the flag.

Daniel Ricciardo ran 10th in the closing stages but quickly fell back following a late Safety Car for Yuki Tsunoda.

Unable to match the pace of Guanyu Zhou ahead following the restart, the Australian then fell victim to Lance Stroll, who stole away that last points-paying place inside the final 10 laps.

“Both cars, towards the end of the race, we had to manage some parameters, the brakes, and therefore it was not possible for Daniel to keep up the pace of the attack,” team boss Andreas Seidl admitted when asked by Speedcafe.com about the lack of pace in the closing laps.

“Obviously disappointing day for us, I think for various reasons; reliability issues, operational issue today in the race, but also in terms of pace,” he added of the race more broadly.

On Lap 19, it elected to double-stack Ricciardo and Lando Norris under the Virtual Safety Car for Mick Schumacher’s stricken Haas.

However, it was a slow stop for Ricciardo, who entered the lane ninth and left it 12th.

Things went even worse for Norris as the team looked to initially fit a partially incorrect set of tyres, before seemingly being unprepared with the front-right.

All-told, the Brit fell from 12th heading in to 18th and last by the time he rejoined the race.

“We were just not really quick today,” said Ricciardo.

“We were struggling for some pace and then we had to manage a few issues as well.

“So not being able to push and attack just put us too far out of the battle for points.

“Pushing, let’s say, 100 percent, we could probably just hang on to the top 10, but once we start to manage temperatures and things like this, it put us out of the fight,” he added.

Norris headed into the race with his afternoon compromised, McLaren having switched his power unit following qualifying after he suffered a misfire.

It left him both out of position slightly on the grid owing to his inability to compete on Saturday, and down on power as he reverted to an older Mercedes unit.

“Today we just didn’t have the package, the car, the straightline speed” he ventured.

“It’s always tough from 14th, struggling around with some cars, honestly, we shouldn’t be racing against, but at the same time we have to make the most of it.

“One of the biggest factors was we just couldn’t overtake. Simple as that.

“Therefore, I’m just stuck behind slower cars and you just can’t do anything from then on.

With Alpine and Alfa Romeo Sauber bother getting two cars in the points, McLaren’s position in the constructors’ championship is far less comfortable than it was.

Sitting fourth, a considerable distance back from Mercedes in third, there’s just a four-point buffer back to Alpine, with Alfa Romeo Sauber only another 14 back in sixth.

Indeed, the midfield is well condensed in the points standings, with fourth to 10th covered by 64 points after nine rounds.

Formula 1 is next in action for the British Grand Prix on July 1-3.