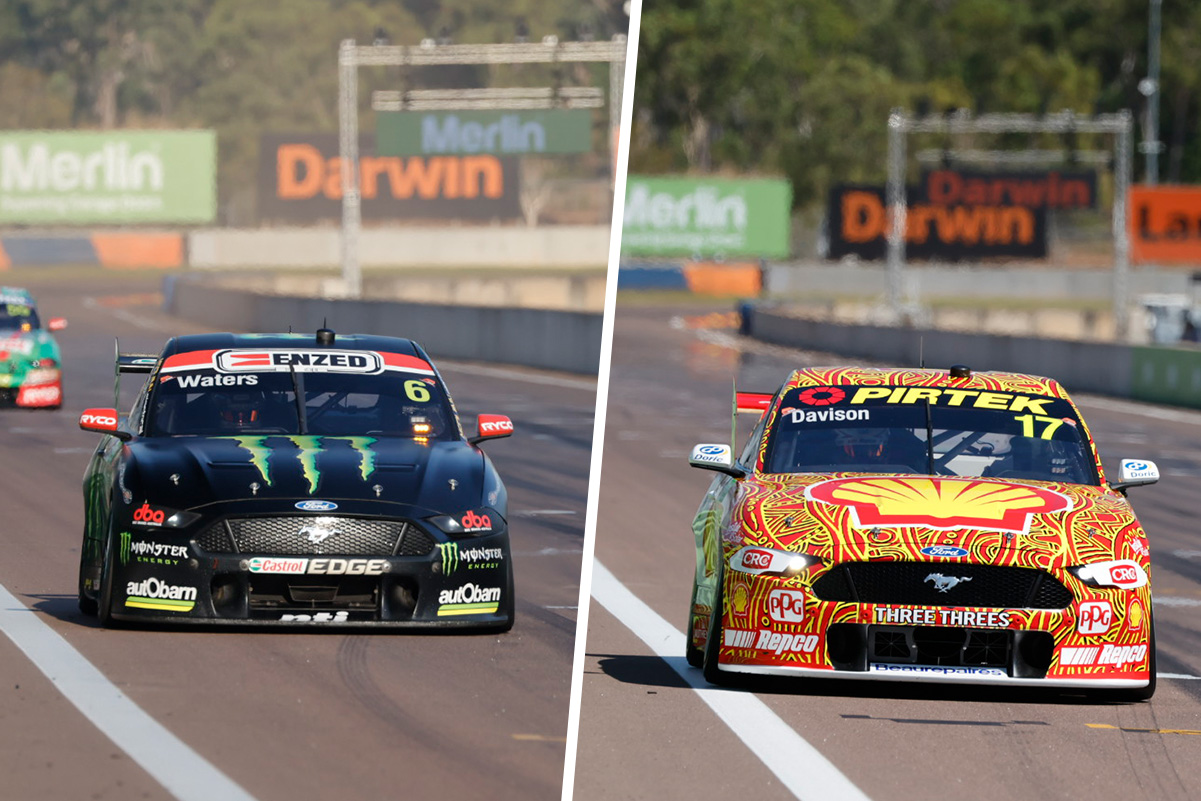 Cameron Waters and Will Davison have each taken a pole position ahead of Sunday’s Repco Supercars Championship races at the Merlin Darwin Triple Crown.

Tickford Racing’s Waters (#6 Monster Energy Mustang) was fastest in Qualifying for Race 17 at Hidden Valley before Davison, as he had done the afternoon before, broke the practice/qualifying lap record to top the hit-out which decided the grid for Race 18.

He did so after an unusual mishap as he went for his only run in the session, the #17 Shell V-Power Mustang backing into the fence when it was pushed from its pit bay into the fast lane.

Still, it hardly did any harm as the veteran blazed to a 1:04.8114s, prevailing by 0.1990s over Anton De Pasquale in the second Dick Johnson Racing front row lockout in as many days.

“Conditions were tricky, to go out thinking it would be super grippy with the cooler conditions,” said Davison.

“But, I’m not sure if it was the S5000 rubber [from the preceding session]… there was quite a bit of dirt on the circuit.

“So, first run caught me by surprise a little bit; didn’t quite get the tyres up in the first sector, sort of came home at the end of that first lap but just knew I had to alter my warm up procedure a bit for that run.

“I just changed it a little bit and could feel at the start of the lap the tyres were there and sort of tried to replicate the shootout lap yesterday.

“Possibly it was a little bit better in a few spots so really great to get another one-two for the team on the grid and for me to lower my quali record to a 4.8 was pretty cool.”

On the bumper bender, he quipped, “Full NASCAR-spec I think; just push the rear bumper in.

“I was actually watching Anton’s right-rear because we were very close, so I was studying that and they were pushing me back and then I felt a bit of a bump.

“As I left the lane actually, all I was thinking was, ‘I hope I haven’t damaged the rear quarter’ but anyway, yeah that was a bit silly.”

Championship leader Shane van Gisbergen put the #97 Red Bull Ampol ZB Commodore fourth on the grid for the first race of the day and fifth for the second of them.

At a much cooler Darwin than the afternoon prior, everyone rolled out at the start of Qualifying for Race 17 and Waters was quickest at the end of the first runs on a 1:05.6206s.

However, Waters had a response for them, clocking a 1:05.2552s just before the chequered flag, after which David Reynolds (#26 Penrite Mustang) grabbed the other front row berth when he set a 1:05.3020s.

Broc Feeney (#88 Red Bull Ampol ZB Commodore) went for two flying laps, as he did on his opening run, and while the second of those yielded the fastest first sector of the session, the first was quicker in total at a 1:05.5210s.

Tickford wildcard Zak Best qualified last in the 27-car field after an early run-in with a barrier off Turn 1 which damaged the right-front suspension on the #78 Opposite Lock Mustang.

The second 10-minute hit-out ran to a different rhythm with just seven drivers setting a lap time in the opening half of the session, Tim Slade (#3 CoolDrive Mustang) quickest among them with a 1:05.6450s and Todd Hazelwood (#35 Truck Assist ZB Commodore) second on a 1:05.8083 on new tyres also, while the rest reportedly started on used rubber.

Usurping them all would be Davison, meaning he and De Pasquale will share the front row again in a repeat of the top two from the shootout on the preceding afternoon.

Winterbottom did enough to take 11th despite a late off at Turn 1 when he slid all the way into the fence on the dewy grass, while Reynolds ended up 12th.

Slade was 17th with no improvement on his first run, Hazelwood improved marginally in scoring 18th, but Best did not go out due to the earlier damage.