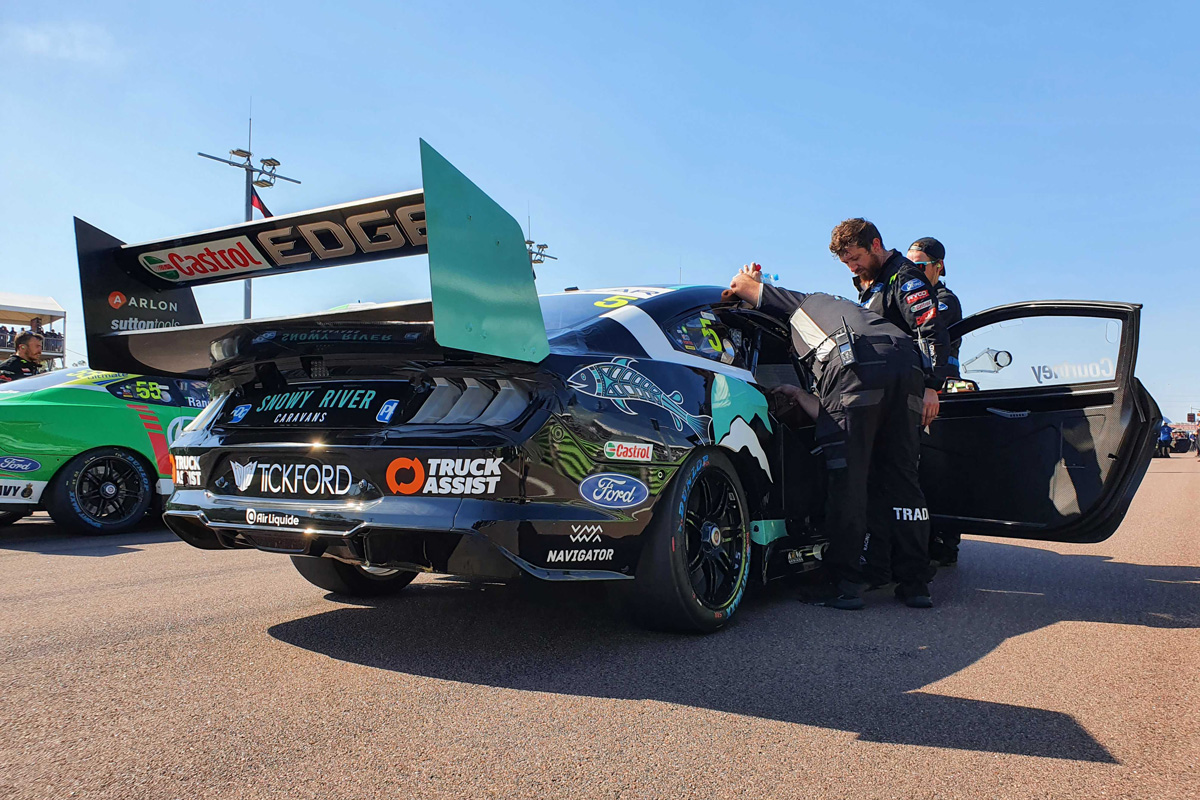 Tickford Racing has completed a mammoth rebuild of James Courtney’s Ford Mustang in time for Race 18 at the Merlin Darwin Triple Crown.

The #5 Snowy River Caravans entry was involved in a four-car pile-up on Lap 1 of Race 17 after being speared off the track between Turn 5 and Turn 6.

Courtney’s right rear clipped the tyre bundle inside the hairpin before ricocheting back onto the track.

In doing so, he collected Scott Pye first. The Team 18 driver then went into the side of Courtney’s team-mate Thomas Randle. Matt Stone Racing’s Todd Hazelwood was another victim of the Turn 6 melee.

“I think most people, even the team themselves, when they first saw the car thought there was zero chance.

“We’ve got nine minutes to go before the 30-minute signal. It’s an exceptional job by the guys.”

The wounded Ford Mustang returned to the pit lane with a gaping hole in the right rear.

Despite that, the team completed the rebuild in less than two hours.

“It did all the rear suspension, every bit of panel work at the rear, all the sheet metal. She’s pretty rude underneath, don’t look too close.

“Plus, the front end damage, all the rail extensions. A lot of damage. The guys have done a fantastic job.

“You can change suspension pretty quickly, because it’s plug and play. When you’ve got to fit bodywork, boots, and rear quarter panels, things like that, a lot of work goes into that.

“JC was pretty much on his way to drink some beers and we had to turn him around and tell him to go get his race suit on,” he laughed.

It is not yet clear whether Pye will make the start of Race 18, which he had been due to start from seventh on the grid, as they race the clock to complete a transaxle change.

A post-race investigation into the Race 17 incident determined that no driver was wholly or predominantly to blame, and thus no penalties were applied.

Race 18 of the Repco Supercars Championship at Hidden Valley Raceway gets underway at 15:25 local time/15:55 AEST.