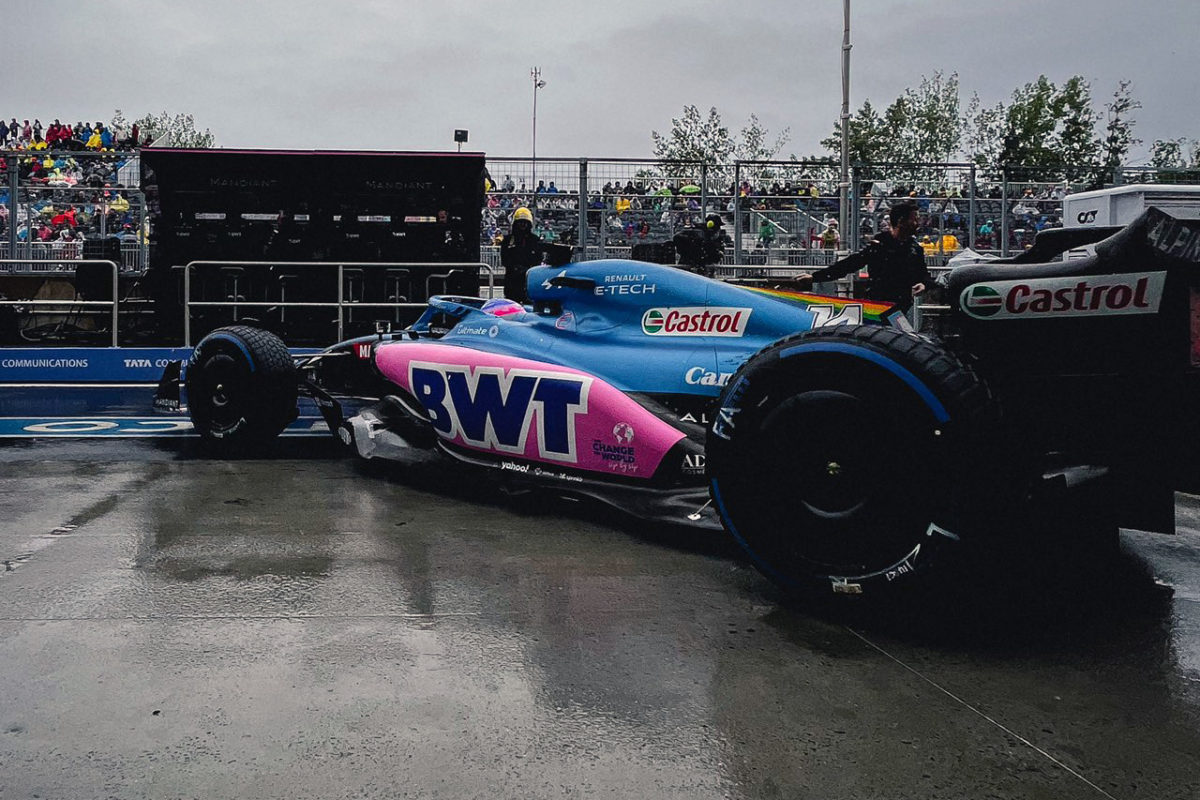 Fernando Alonso has made the most of wet conditions to go fastest in the final practice session for the Formula 1 Canadian Grand Prix.

The Alpine driver was one of the first to brave the switch from full wets to inters in the latter moments of the 60-minute outing to log a 1:33.836s.

He would have headed Sebastian Vettel (1:33.891s) in second were it not for Pierre Gasly, who banked a time just 0.002s quicker than the German as the session ended.

A mixed of order followed, Sergio Perez the best Red Bull in eighth while Charles Leclerc was last having not set a representative time, though also without encountering any issues (beyond a looming rear of grid start after taking a new power unit).

Wet conditions made for a slow start, with only Haas and Alfa Romeo Sauber heading out as the session began, all on full wet tyres.

Charles Leclerc and Carlos Sainz joined proceedings after a few minutes while, back in the pit lane, a number of drivers hadn’t even climbed into their cars.

Kevin Magnussen’s 1:39.148s was the first benchmark time, his effort some 25 seconds down on the pace seen in Friday’s dry running.

The battle was generating tyre temperature, with little grip and low ambient temperatures.

Only six drivers had completed a timed lap after 15 minutes, while Mercedes, Alpine, and Red Bull had all remained in the garage.

Extreme wets were still the tyre of choice after 20 minutes. A slightly less wet line had formed but conditions remained extremely difficult as drivers managed near continual snaps of oversteer.

Next time around he went quicker again with a 1:35.858s as he began to generate tyre temperature.

More than half the session has passed before Max Verstappen headed out, the Red Bull driver the last of the 20 runners to do so.

He recorded just two laps, not setting a time, before returning to the pits.

Others were rather busier, Yuki Tsunoda almost constantly on track as were the likes of Lance Stroll and Sebastian Vettel.

With 20 minutes remaining, Sainz and Alonso headed out with a set of intermediate tyres bolted on, the first to brave the shallower grooved rubber.

After a couple of laps building temperature, the Alpine driver went fastest with a 1:34.836s.

Vettel had also moved onto the inters, the German second fastest for Aston Martin with a 1:35.821s.

Alonso then went even faster, a 1:32.229s at the next time of asking, while Lance Stroll rose to second fastest on the full wets, his 1:35.531s suggesting the crossover point between the two compounds had been reached.

Underscoring that was Vettel moving to the top of the timesheets in the other Aston Martin, logging a 1:33.891s on the inters with 10 minutes left in the session.

The bulk of runners took notice and swapped to the green-walled tyres, Alonso going fastest again with 1:33.836s.

A moment for Magnussen at Turn 1 saw the Haas driver skate through the run off and almost catch the wall at Turn 2, stopping just shy of making impact.

It drew the double yellow flags, which were soon needed again when Max Verstappen spun on a puddle at the apex of Turn 2.

Like Magnussen, he was lucky to keep the car out of the fence, reversing to get back on track before carrying on.

The session ended with Alonso fastest from Gasly, who improved late on to steal second from Vettel, then Esteban Ocon.

Qualifying follows next, starting from 0600 AEST.