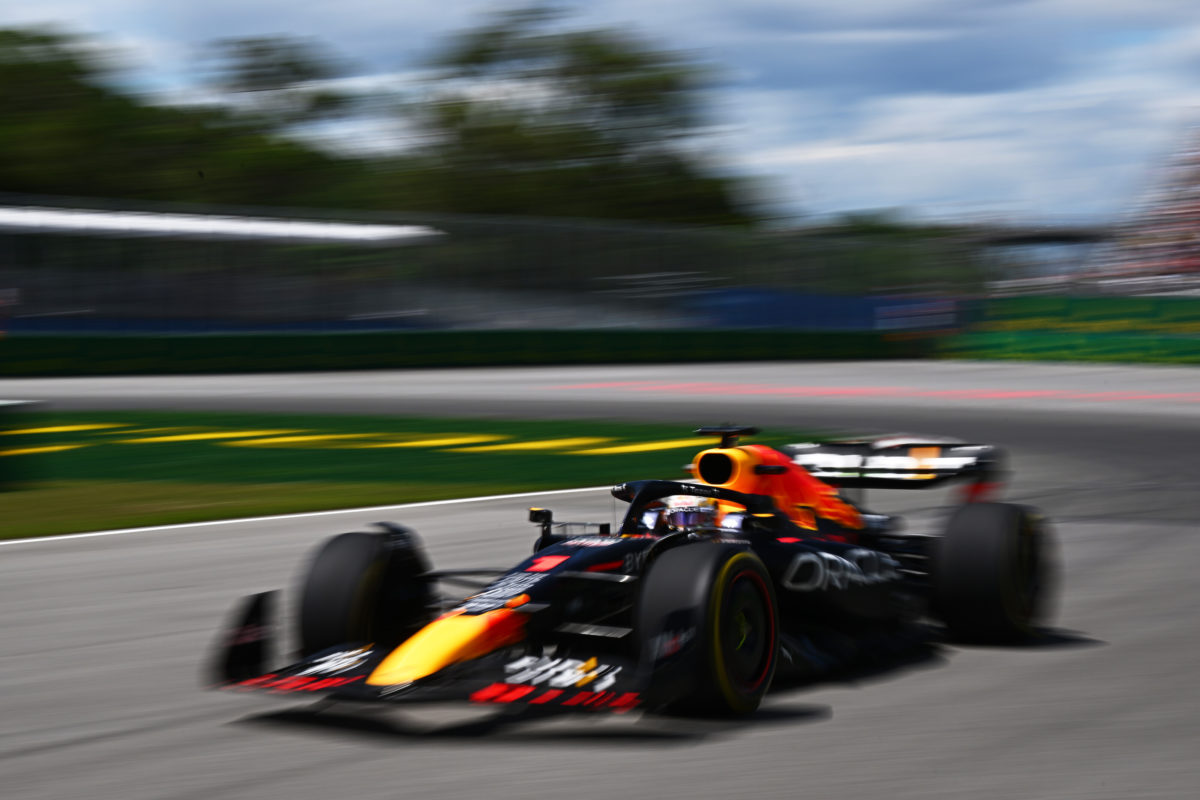 Max Verstappen has topped the opening practice session for the Formula 1 Canadian Grand Prix with Fernando Alonso a surprise third.

The 2021 world champion was 0.2s clear of Carlos Sainz in second, while Charles Leclerc in the other Ferrari was only fifth, one spot behind Sergio Perez.

The track was immediately busy as teams looked to gather data on a circuit they’d not visited since 2019.

A green circuit welcomed them, with little to no running during the intervening years, while heavy rain lashed it on Thursday.

Most opted for the medium compound tyres, only Leclerc, Yuki Tsunoda, and Alonso donning a set of softs in the opening minutes.

Verstappen topped proceedings after the initial flying laps with a 1:16.507s, shadowed by Sergio Perez some 0.582s slower in second best.

At the 10-minute mark, that became a 1:15.799s for Verstappen as the pace continued to drop with the improving track conditions.

Esteban Ocon suffered front-right brake issues on his Alpine, the Frenchman limping his way back to the pits, his front wheel smoking heavily.

The issue was caused by debris getting caught in the duct, blocking the airflow and triggering it to overheat.

Alonso, in the sister car, was enjoying solid pace, sitting third best after 20 minutes of running, 0.6s slower than Verstappen.

Approaching midway through the session, focus switched onto the soft compound tyres. Aside those who’d been out early on the red-walled rubber, Perez was one of the early adopters.

His initial effort was just 1:15.722s, some half a tenth away from his pace earlier.

Verstappen followed suit, though didn’t complete a timed lap on the soft tyres, doing nothing more than an installation lap before circling back to the pits after reporting his inside wheel lifting while cornering.

Meanwhile, the Aston Martin duo of Lance Stroll and Sebastian Vettel sat third and fourth, the former 0.2s away from the outright pace.

Vettel had gone faster than anyone through the middle sector as he set a 1:16.041s, losing time to his rivals at the start and end of the lap.

The order again began to change quickly as the Ferrari pairing headed out on soft tyres, Sainz going fastest with a 1:15.441s, while Leclerc slotted in third with 1:15.666s.

Verstappen soon returned to the top of the timesheets with a 1:15.158s, set on the soft rubber, a time which would ultimately prove the fastest of the session.

The final quarter hour saw Stroll on track with the rear wing of his car coated with flow-viz paint.

A near miss for Carlos Sainz saw the Ferrari driver avoid a member of the local wildlife, a marmot running across the track on the chute from Turn 2 to Turn 3.

With the weather predicted to close in later in the day, the final minutes of the session saw teams fill their cars with fuel to complete race simulations.

All bar Norris were out on track as a result, the McLaren driver out of the car, which sat on stands in the garage after the team spotted an issue on his MCL 36 which would have taken too long to resolve.

Cars return to the Circuit Gilles Villeneuve for Free Practice 2 at 07:00 AEST.