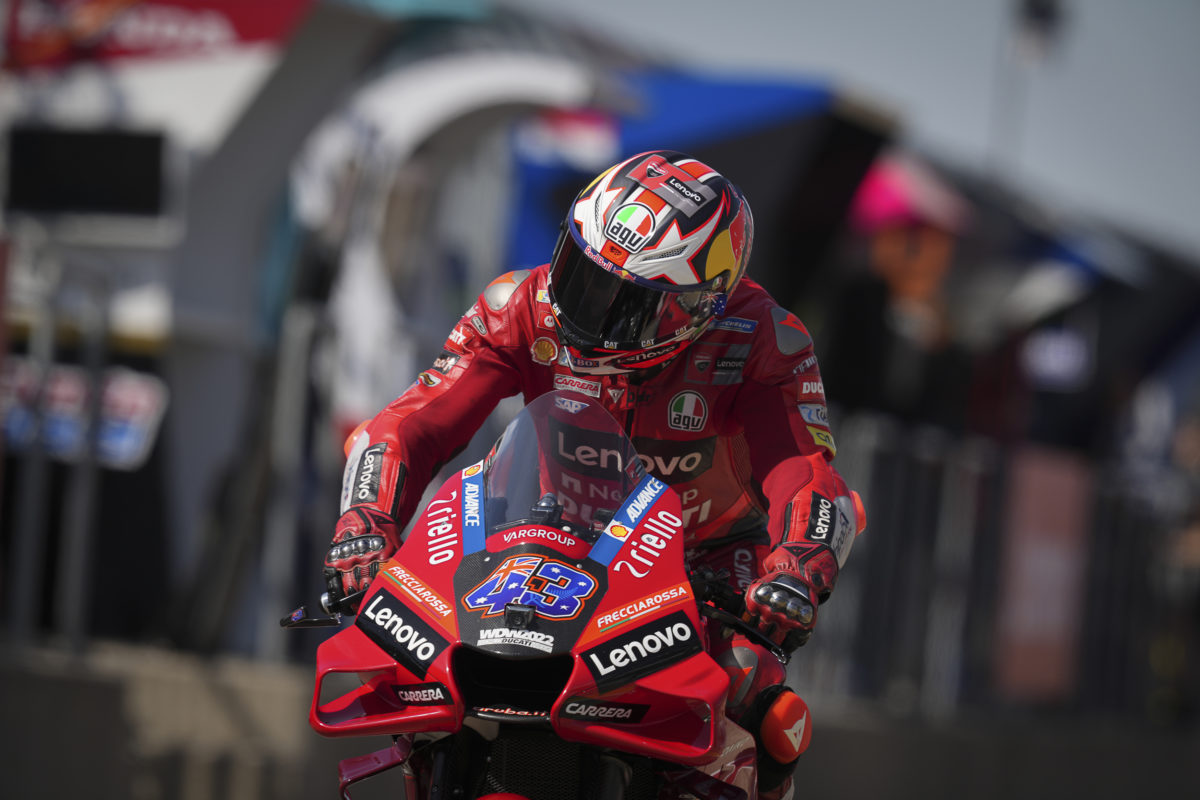 Jack Miller has attributed his step up in performance in practice for the German MotoGP to a new riding and handlebar position on his Ducati.

The Queenslander showed only glimmers of speed in the first nine rounds of the campaign and found himself ninth in the standings on the way to the Sachsenring this weekend, behind three Ducati riders including factory team-mate Francesco Bagnaia.

However, he topped Free Practice 1 for Round 10 of the season and followed that up by going third-fastest in the second session of the day, within two tenths of a second of the lap-record pace set by Bagnaia and Mooney VR46’s Luca Marini on another current-spec Desmosedici.

The showing is in stark contrast to Miller’s last two races, when he finished 15th at Mugello and a “shithouse” 14th at Catalunya, and comes after a post-race test at the latter.

It was then that he and the Ducati Lenovo Team made a breakthrough with set-up on the GP22-model Desmosedici, a package which has been difficult to come to terms with for all three teams who are fielding it this year.

“The day’s been good, from the beginning,” Miller told MotoGP’s official website.

“We made a massive step forward in the test in Barcelona, and just moving on from there, what we learnt and what we changed in Barcelona has really helped us to hit the ground running here in Germany.

“Because, I’ve been suffering a lot since the beginning of the year, to be honest, to stop this thing, to stop my bike, and we shifted, quite a lot, my riding position, we moved the handlebars forward a whole heap.

“[It is] more similar to what the other boys are on, and immediately it’s been able to give me a lot of front confidence back in it, to exploit the strong aspects of this bike and how it brakes, but without sacrificing the turning.”

Not only did three Desmosedici GP22s fill the top three in Friday practice, the other two got into the top six in the hands of Prima Pramac Racing team-mates Johann Zarco and Jorge Martin.

That proves how much better Ducatis are at turning nowadays, according to Miller.

“Here is the tightest track we’ve got, and to have three Ducati GP22s in the first three positions in impressive because if you look on paper, this probably wouldn’t be the Ducati track,” he added.

“But, we’re just getting to show again that the GP22’s getting stronger and stronger, and also the Ducati is.

“It’s tight through the first sector and it’s working really well through there.”

Ironically, the gains come as soon as the three-time MotoGP race winner was confirmed as a Red Bull KTM Factory Racing rider for 2023, although Miller insists he will not be shut out on development parts in his last 11 rounds in red.