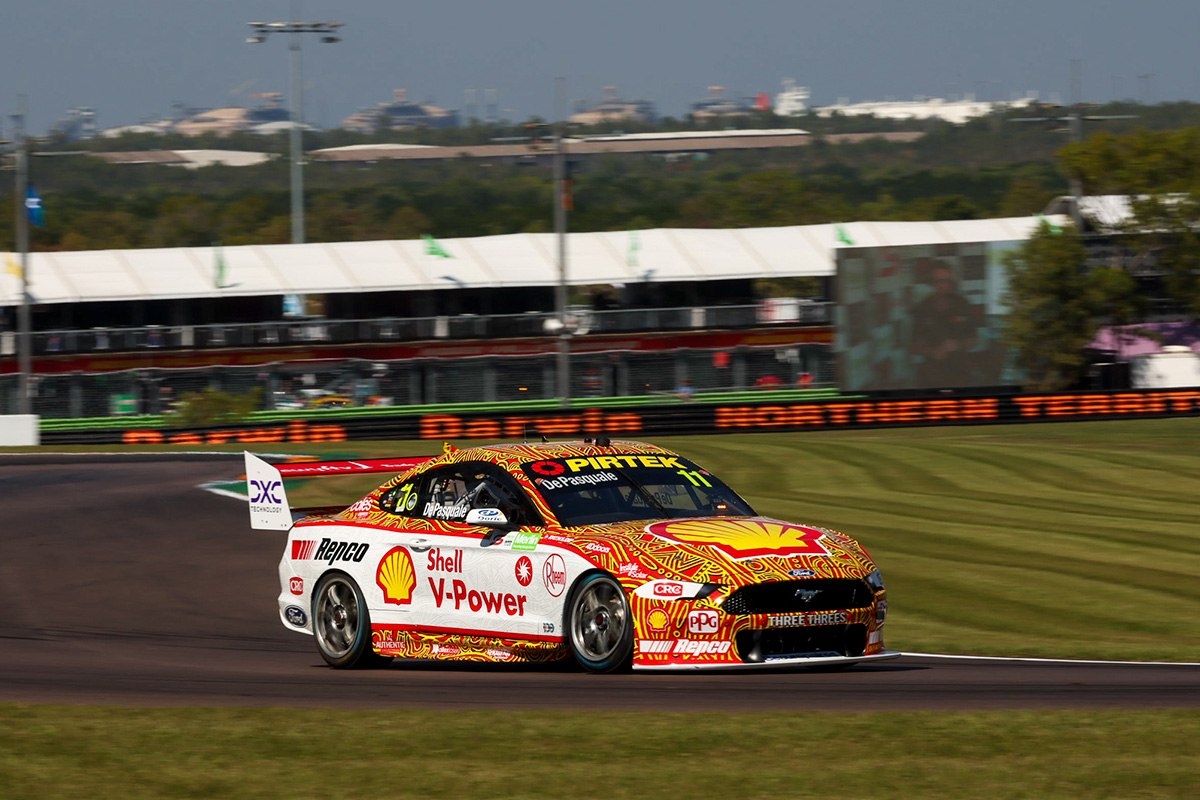 For Red Bull Ampol Racing, it was a missed opportunity for Shane van Gisbergen who suffered a slow pit stop – eventually charging home late in the piece to secure third.

In his 500th race, Will Davison would defend valiantly but ultimately couldn’t convert pole position after losing the lead on Lap 1 to his team-mate.

“We came pretty close down at Turn 5 but we all came out the other side, so hopefully it was good racing for everyone at home.

“We’re always trying to put on a good show here in Darwin, so yeah, awesome race.”

Off the line, it was a relatively even getaway between the Dick Johnson Racing entries. Andre Heimgartner walked his car off the line well, but Davison covered on the run down to Turn 1, leaving the R&J Batteries Racing driver with nowhere to go.

Under brakes, De Pasquale got his nose ahead of Davison and hung around the outside. The pair duly ran side-by-side through the esses, only to make wheel-to-wheel contact on the run to Turn 5. Fortunately, the pair escaped unscathed, though De Pasquale prevailed.

Macauley Jones (#96 Kubota Racing) was an early victim of the opening lap melee as he fell off the road at Turn 1.

At the commencement of Lap 2, van Gisbergen sent smoke signals as he locked up under brakes into Turn 1 as he sought to find a way by Heimgartner.

Drama struck on Lap 2 when Jack Smith found the wall. Moments later, Brad Jones Racing would have another dose of drama: hopes of a strong finish for hometown hero Fullwood were dashed when he made contact with Reynolds at the final corner on Lap 1.

That sent the Grove Racing driver into a spin and with enough damage to force him to pit. Fullwood was subsequently given a 15-second penalty for the contact, which he served during his pit stop. In the end, he would come home 17th.

Chaos continued on Lap 3 when Brown got into the rear of Pither, the pair of them going off the road at Turn 7. Pither would suffer a puncture and missed opportunity having started 11th while Brown copped damage to his left front suspension that would rule him out of contention. Pither, in the end, was 24th.

Come Lap 10, van Gisbergen cleared Heimgartner with a pass at the hairpin to occupy the final place of the podium.

Tim Slade’s effort to usurp Garry Jacobson further afield came undone after he locked up into Turn 5 and ran wide. That saw him cede places to Lee Holdsworth (#10 Penrite Racing) and Todd Hazelwood.

Heimgartner would lose out in the pit stop sequence, dropping out of podium contention when he was undercut by Mostert who pitted on Lap 16 – two laps earlier than Heimgartner.

De Pasquale pitted on Lap 20, returning to the race ahead of team-mate Davison. That gave van Gisbergen the lead, who opted to run longer.

Come the end of Lap 23, van Gisbergen came to the lane for his stop; opting to take three tyres. Any benefit of taking the extra tyre was hindered when the left rear tyre changer struggled to get his wheel fitted. On the rejoin, van Gisbergen would come out behind Pye to sit seventh.

With the benefit of fresh rubber, the Kiwi quickly dispatched Pye and then his own team-mate Broc Feeney (#88 Red Bull Ampol Racing) who had made his way to fifth courtesy of a particularly early pit stop.

Thomas Randle (#55 Castrol Racing) briefly cycled his way to the lead, although he pitted soon enough to hand De Pasquale the lead to the tune of 1.7s over Davison. Third was Mostert, 3.0s adrift of the lead.

Heimgartner was a distant fourth, 5.9s away once the field was cleansed on Lap 26. Van Gisbergen was quickly within striking distance to take fourth and with 10 laps to go cleared him at Turn 5.

Lap after lap, van Gisbergen ate into the margin of the leaders. With eight tours of Hidden Valley Raceway remaining, the gap stood at 4.7s.

Come Lap 33, van Gisbergen put himself onto the podium with a pass on Mostert at Turn 6. That put Davison in van Gisbergen’s crosshairs with a little over five laps remaining.

With three laps to go, van Gisbergen got within striking distance of Davison. However, a pass wasn’t forthcoming immediately. Indeed, van Gisbergen’s hopes were nearly dashed when he wagged the tail under brakes at Turn 5 on the penultimate lap.

Ultimately, van Gisbergen couldn’t clear Davison, settling for third. At the head of the field, De Pasquale came across the line 1.1 clear of the trailing pair.

Mostert fell shy of the podium, claiming fourth while Heimgartner was fifth.

The top 10 was completed by Winterbottom, Pye, Waters, Feeney, and James Courtney.