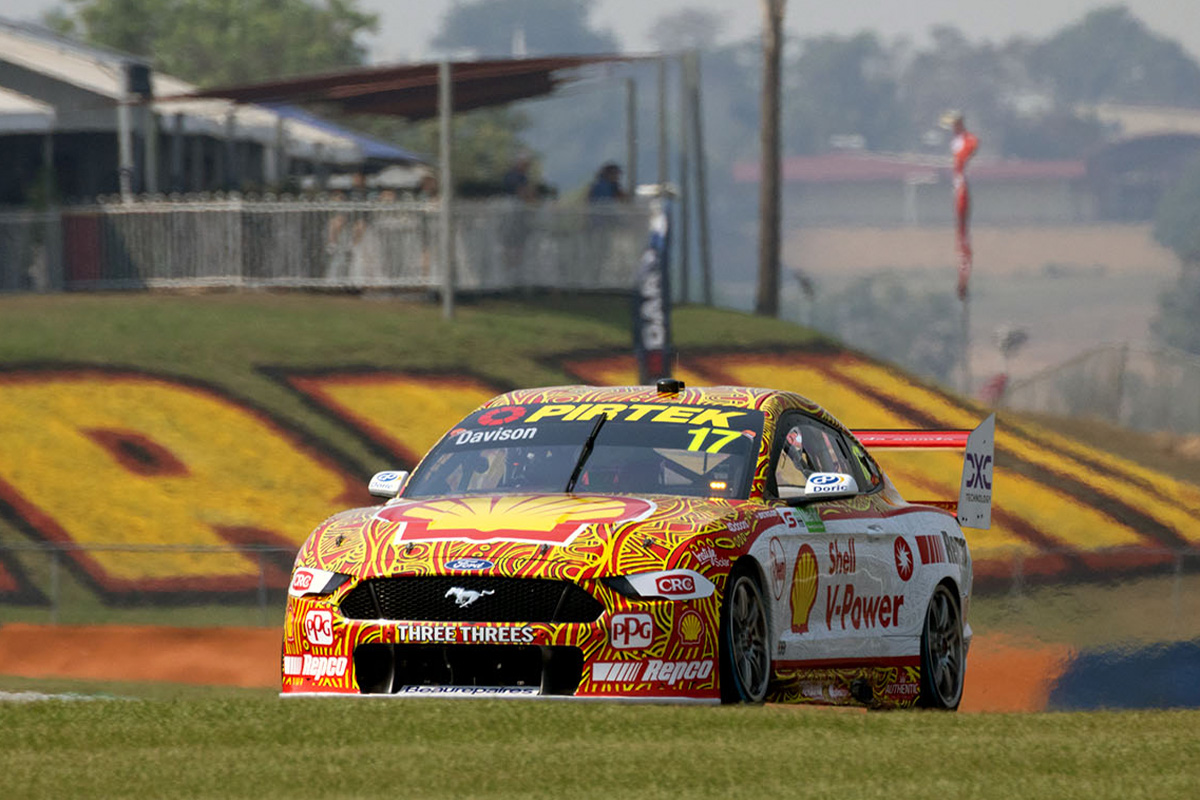 Will Davison has qualified on pole position in lap-record pace in a Shell V-Power Racing Team front row lockout for Race 16 of the Repco Supercars Championship in Darwin.

Davison beat his own Hidden Valley practice/qualifying record by setting a 1:04.9542s in the Top 10 Shootout which marked the climax of a three-part, knockout qualifying session at the Merlin Darwin Triple Crown.

Joining him on the front row will be team-mate Anton De Pasquale, albeit at 0.2819s off the pace, while provisional pole-sitter Andre Heimgartner wound up third in the #8 R&J Batteries ZB Commodore and championship leader Shane van Gisbergen fourth.

Among the notables who did not get into the one-lap dash were Tickford Racing’s Cameron Waters (#6 Monster Energy Mustang), who qualified 12th, with neither Nick Percat nor Lee Holdsworth making it over the first hurdle in Qualifying for Race 16.

Davison (#17 Mustang) was only a provisional fourth on his way into the shootout but then stormed to not only the fastest lap of the weekend, but one which was 0.0011s quicker than the circuit benchmark which he set a year earlier.

Chaz Mostert was next out and all but matched Davison to the first sector but was clearly slower in the second, then dropped a wheel off as he exited Turn 11 in the #25 Mobil 1 Optus ZB Commodore.

The Walkinshaw Andretti United pilot broke the beam in a time of 1:05.4686s, which left just van Gisbergen and Heimgartner standing between Davison and pole position, if they were good enough to beat the Dick Johnson Racing steerer.

Van Gisbergen set an even faster first sector but, like Mostert, lost time in the second and then hit the kerb hard through Turn 11, which unsettled his #97 Red Bull Ampol ZB Commodore.

He would clock a 1:05.2923s and that ended up being the fourth-fastest shootout time once Heimgartner came through and set a 1:05.2672s at the end of proceedings.

Neither could knock off De Pasquale, who had driven the #11 DJR Mustang to a 1:05.2361s to also earn a berth at the head of the grid from a provisional sixth position.

Mark Winterbottom (#18 Irwin Tools ZB Commodore) was another major mover, clocking a 1:05.3522s which was good enough for fifth all-told having been ninth-quickest before the one-lap dash.

Mostert ended up sixth and David Reynolds (#26 Penrite Mustang) set a 1:05.4810s to be seventh, ahead of the three drivers who carried used super soft tyres into the shootout.

Tickford’s best in the session was Jake Kostecki, although he dropped from a provisional eighth position to 10th all-told when he ran the #56 Tradie Mustang off the road at the start of his shootout lap and opted to pit at the end of it.

Earlier, in the second 10-minute stanza, Heimgartner set the pace with a 1:05.2313s, 0.0448s faster than van Gisbergen, who may have had some assistance in the form of a tow from team-mate Broc Feeney when #97 was first to beat his own practice benchmark.

Mostert looked like being the most notable victim when he was bumped out of the top 10 in the final three minutes, but hit back with a 1:05.3436s to go to third.

That effort pushed Cameron Waters (#6 Monster Energy Mustang) back to 11th, and he was shifted to the other side of the sixth row when Chris Pither clocked a 1:05.5388s in the #22 Coca-Cola ZB Commodore.

Pither, however, missed out on making the shootout as well, given he was 0.0304s slower than Reynolds, while Row 7 will be comprised of Brodie Kostecki (#99 Boost Mobile ZB Commodore) and Thomas Randle (#55 Castrol Mustang).

Percat (#2 Mobil 1 NTI ZB Commodore) got knocked out of qualifying with the chequered flag out, pushed to 21st position on his 1:06.0480s when Jake Kostecki jumped to 18th.