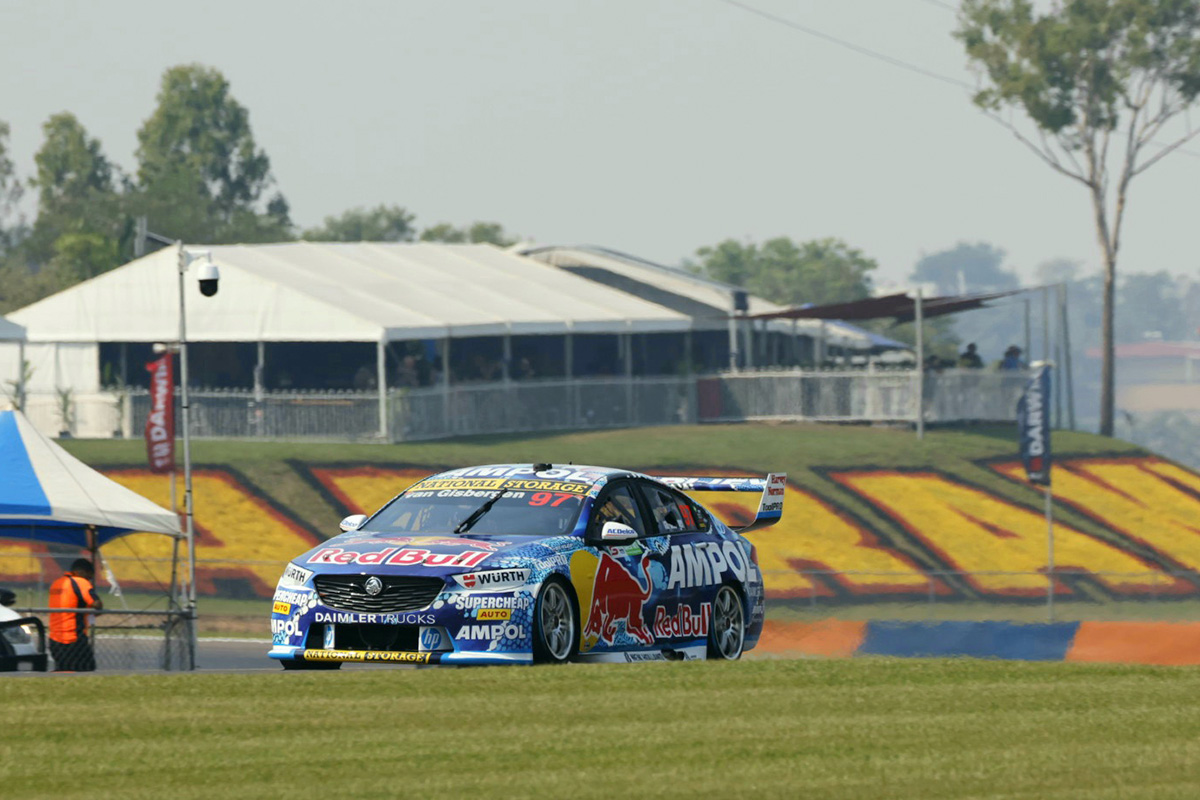 Shane van Gisbergen has gone quickest in Practice 2 for the Repco Supercars Championship field at the Merlin Darwin Triple Crown.

The championship leader set a 1:05.4203s in a mid-session qualifying simulation in the #97 Red Bull Ampol ZB Commodore at Hidden Valley and ended up 0.0432s faster than Brad Jones Racing’s Andre Heimgartner in the #8 R&J Batteries ZB Commodore.

The half-hour hit-out ran without a red flag despite a significant mishap for Tickford Racing’s James Courtney, who bent the front of the #5 Snowy River Caravans Mustang when he pinched a brake and ultimately ran into the tyre wall at Turn 10.

Quickest straight out of the box was Brodie Kostecki (#99 Boost Mobile ZB Commodore) on a 1:05.8158s but, unlike in the earlier session of the day, the first-run times did not stand for long.

Several of the heavy-hitters made an early switch to new tyres, having apparently refrained from using any in Practice 1, and that led to a string of new fastest laps.

By the time the second runs were done, van Gisbergen held sway on the aforementioned 1:05.4203s, half a second quicker than Mostert’s benchmark in the earlier session when race runs were the more popular programme.

It was then, in the 17th minute, that Courtney had his prang at Turn 10, although he was able to drive out and return to the pits under his own power, where he would remain for the balance of proceedings.

Despite more green tyres being rolled out, there were few other changes at the pointy end, although Heimgartner elevated himself to second with a 1:05.4635s and Mostert took up sixth on a 1:05.6660s.

Van Gisbergen was disappointed that he could not find any further time on his second new-tyre run.

“We put new tyres on and had a go and ended up pretty fast,” said the Triple Eight Race Engineering pilot.

“Last run, I didn’t improve so we detuned it a little bit, and I drove bad, so can tune that up.”

Courtney was shuffled back to 24th in the 27-car field at the end of Practice 2, having been 18th when he went into the wall.

Qualifying for Race 16, a three-part knockout session culminating in a Top 10 Shootout, gets underway tomorrow from 11:45 local time/12:15 AEST.