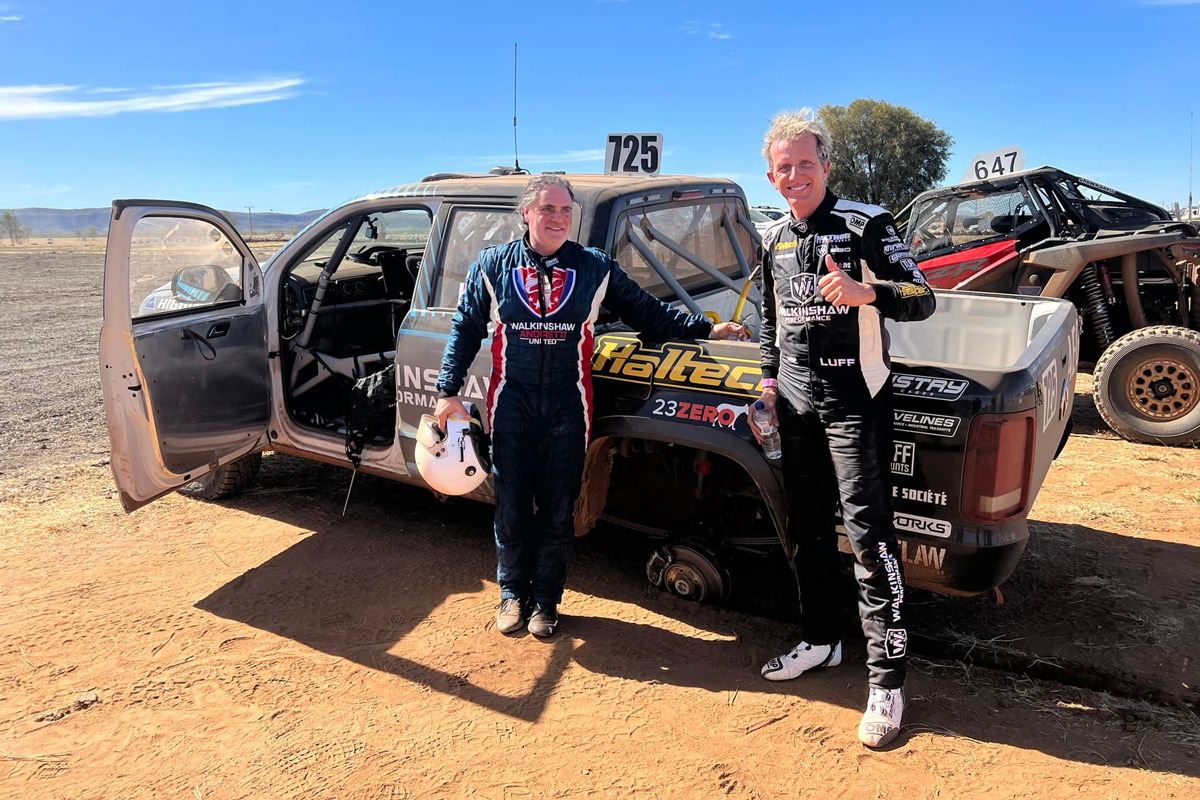 Warren Luff is already counting down the days until the 2023 Tatts Finke Desert Race after an enjoyable albeit bumpy debut.

That came despite the harsh terrain plucking a wheel off the car, not to mention overnight repairs following a Day 1 DNF.

Front suspension was the cause of the stoppage 150km from Aputula, with the car being limped down a service road to be rebuilt.

“We were having a pretty good run back for most of the way but probably about 120km out from Alice, we basically just lost all rear damping in the car,” Luff reflected to Speedcafe.com.

“The track was so rough on the way back and just the whoops were so big, so basically the last 120km was just on the rear leaf springs and the bump stops, which made it rather challenging.

“And then probably 80km out we lost the front shocks out of it, so it was the same on just the front springs and bump stops. For us to be that close to home, it was just a case of make sure we drove it at a pace that got us over the line in the allocated time.

“About 5km to go, because the last 100km of the track was so rough and even though we were trying to obviously drive it to a pace it actually managed to break the left-rear wheel off.

“We just skull dragged it the last 5km down onto the prologue section and the last bit of the stadium section and we managed it to get it over the line.”

The six-time Bathurst 1000 podium finisher hailed the efforts of his crew and admitted the event was “everything and more” that he’d dreamed of.

“It’s such an amazing event to not only be here but to obviously be competing and how the whole town and so many spectators travelled out to be here. I was really sort of overwhelmed with how big the event is,” he said.

“For us as a team, it was a challenging event but you talk to everyone and everyone says it’s probably one of the toughest events that they have ever done and I’ll definitely attest to that.

“Bathurst doesn’t even compare when you talk about attrition and how hard the event is in comparison.

“But it’s a different style of racing, it’s a different type of challenge and everything like that, especially being in the production car class, you’re not trying to drive the car flat out for the run down and back – there’s sections where you can go quite fast, but then there’s other parts where it’s basically a game of survival.

“You look at the attrition rate as to how tough it is, it just goes to show why everyone has so much respect for this event.”

An incident Luff witnessed made him convinced those on two wheels had done it even tougher.

“When we had to skulldrag the car down to Finke on the Sunday, we were stopped a few kilometres short because we had to wait for the bikes to come through,” he explained.

“We were standing there and one of the bike guys had a massive stack in front of us and was probably knocked out for three or four minutes – we all ran out there to offer assistance – he finally regained consciousness and realised that nothing was broken and about five minutes later he had his helmets on and put his gloves back on to get to the finish line.

“The guys and girls on the bikes, they’re the real heroes of this event for me.”

The 46-year-old noted his machine was already markedly better than its previous competitive outing, the Cobb & Co Hotel St George 399, and preparations for a second crack at Finke are already in mind.

“Even just the improvements made to the car between the first round and here, like we won the prologue for our class and the car had really good pace, so it’s a constant development of trying to improve the car,” said Luff.

“You realise very quickly in this type of motorsport that experience is the key and is massive. So we’re learning and we’re learning very, very fast.

“We know that we have got a car that is fast enough, we have just got to work on the durability side of it.

“That’s just a constant evolution of learning about this type of sport and the car and what we can do to make it better, stronger, faster. So yeah, Finke 2023 planning is already well underway.”

Luff will make his 23rd Bathurst 1000 start this October, although it has yet to be confirmed which of Walkinshaw Andretti United’s Supercars drivers that will come alongside.