Team 18 has unveiled the Indigenous livery which Scott Pye’s ZB Commodore will carry for the Repco Supercars Championship events in Darwin and Townsville.

Car #20 will sport its usual black base and red hues, but with a special design created in collaboration between naming rights partner Nulon and GH United, a Mackay-based Memorial Rugby League team.

Mackay-based Indigenous artist Debbie Thaiday, of DT Trait Designz, and her family, who are from the Iama and Erub Islands in the Torres Straits, are responsible for the artwork.

It pays homage to two Mackay women, Gail Hine and Grace Hoffman, who both died from a brain aneurysm in 2009, and the livery’s release coincides with what would have been the latter’s 60th birthday.

The design reflects their Torres Strait heritage, with a butterfly on the roof representing Hine and the larger turtle representing Hoffman.

The burgundy dots are the colour for brain aneurysm awareness, while the totems of the women are represented by a Torres Strait Island Pigeon and Crocodile.

The black tip reef shark and crocodile are the totems of the family of Debbie Thaiday, and the four yellow frangipani flowers represent the four children of both Grace and Gail.

Also part of the artwork are significant Torres Strait Islander drawings such as the Dhari (traditional Island headdress), Warup (Island Drum), Lumut (drum), Gor (used for traditional dancing), the turtle and dugong which are food sources, and a traditional island dancer. 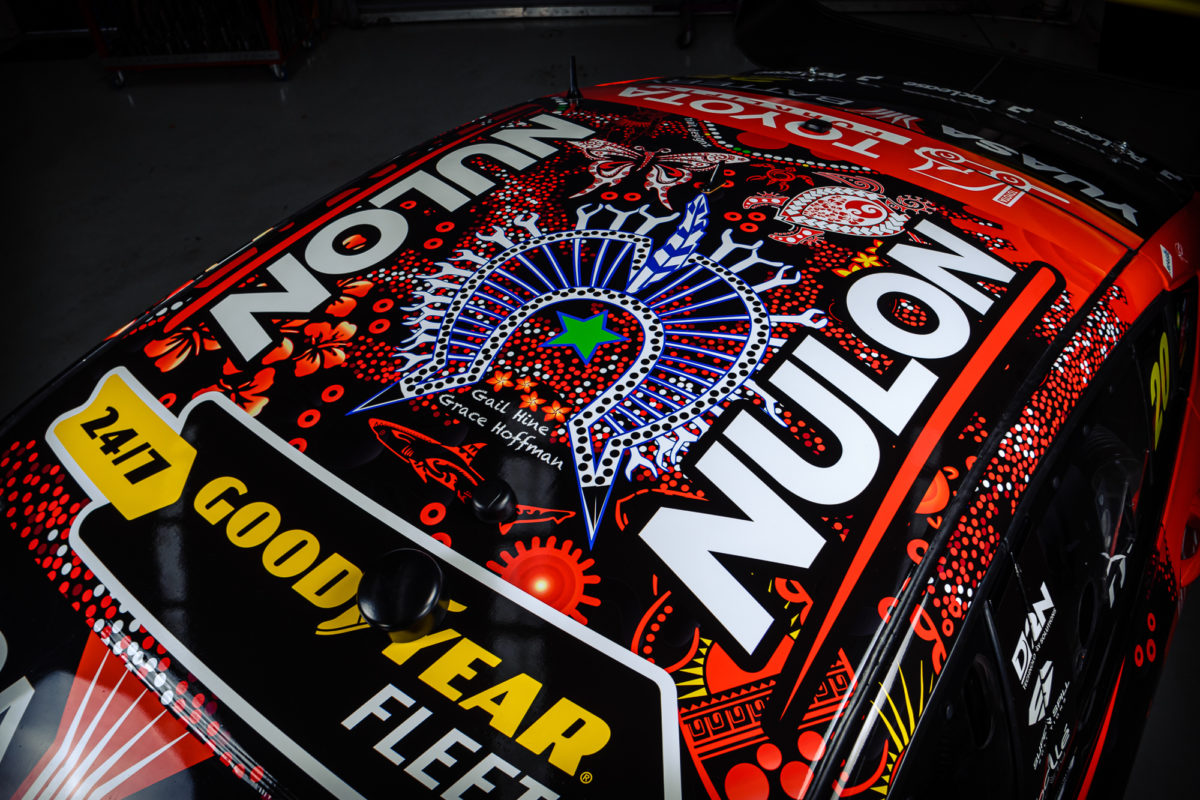 “The Nulon Racing indigenous livery looks absolutely incredible and it will be sure to stand out when we hit the track for the first Supercars Indigenous round in Darwin,” said Pye.

“We are so proud to get behind a cause that Nulon are involved with at a community level and to carry the livery across to Townsville will be really special for the GH United team and the family of Gail Hine and Grace Hoffman.

“We’ve all been working hard since Winton so we can’t wait to get up to Darwin and put our best foot forward and show off this awesome livery on track.”

Thaiday explained, “We recently designed the supporter shirts for the GH United rugby league team for the annual Mackay Indigenous Rugby League Carnival, and we’ve replicated this story of GH United in the indigenous livery for the Nulon Racing team.

“My husband is a cousin of Grace and Gail and we’ve been a part of GH United since it started in 2010.

“It’s awesome to see our artwork on a Supercar and I can’t wait to see the car racing on track in Townsville.

“It’s a very proud moment to represent the story of GH and I know the family are very excited as well.”

Both Team 18 cars, the other being Mark Winterbottom’s Irwin Tools-backed machine, will run their Indigenous liveries for the next two Supercars events.

The Merlin Darwin Triple Crown begins at Hidden Valley Raceway this Friday, while the NTI Townsville 500 takes play on July 8-10.