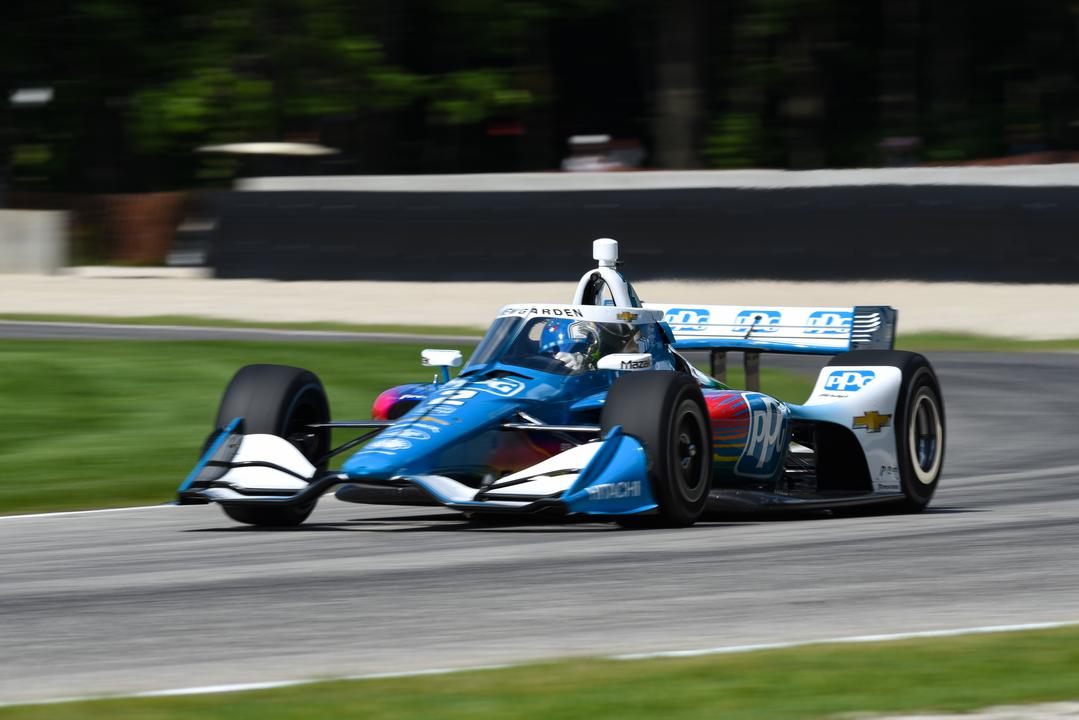 Team Penske’s Josef Newgarden has won a Caution-filled Road America IndyCar race in a three-lap dash to the chequered flag.

Scott McLaughlin got home in seventh but Penske team-mate Will Power finished only 19th after he was pushed into a wall in the early stages by Devlin DeFrancesco (Andretti Steinbrenner).

Ganassi’s Alex Palou was not running at the finish, having already incurred damage in Lap 4 contact with team-mate Ericsson.

The wash-up is that Ericsson now leads the series by 27 points although Power has only dropped to second, Newgarden is third at five points further back, and McLaughlin sits ninth at 94 points off the pace.

Rossi got the jump from pole position when the race got underway in fine conditions at Elkhart Lake, but the opening laps were run largely under Caution.

The first was called on Lap 1 when Jimmie Johnson (Ganassi) ran off after a squeeze with AJ Foyt Racing team-mates Dalton Kellett and Tatiana Calderon at Turn 2, and the second a few moments after the Lap 4 restart as a result of the Ericsson-Palou clash.

Ericsson had made a dive at the Spaniard for third position at Turn 5 and his right-rear broke a left-front toe link on Car #10 when they touched, sending Palou off.

At that point, the top four of Rossi, Newgarden, Ericsson, and Romain Grosjean (Andretti) were on red tyres, while the next five in Pato O’Ward (McLaren SP), McLaughlin, Colton Herta (Andretti w/ Curb-Agajanian), Simon Pagenaud (Meyer Shank Racing), and Scott Dixon (Ganassi), were on blacks, with Felix Rosenqvist (McLaren SP) rounding out the top 10 on reds.

Herta, who had been sent back to 11th on the grid due to a penalty for an unapproved engine change, passed McLaughlin for sixth when they descended into Turn 1 for the second restart, on Lap 7, before yet another Caution was called on Lap 8.

Power was running 15th, where he had qualified, when he was punted into the wall on drivers’ right as DeFrancesco made a mess of an attempted pass at Turn 5.

He managed to stay on the lead lap despite having to be re-fired and then pit for a new front wing, while DeFrancesco would cop a stop and go for avoidable contact.

Restart 3 came on Lap 11, and Rossi led by about 0.5s over Newgarden when they both pitted at the end of Lap 15, with Herta and McLaughlin following them in.

That was crucial because McLaughlin’s arrival in the #3 box meant Rossi was slow out of his own and he got jumped by Newgarden in the lane.

The rest of the top 10 took service next time through, Rossi having to round up Grosjean as the Frenchman came back out at Turn 1, then reclaiming the effective second position from Ericsson when the Swede touched the grass exiting Turn 7 later that lap.

With several having stopped early, it was a mixed-up order after the pit cycle as Rosenqvist held the lead, from Graham Rahal (Rahal Letterman Lanigan Racing), Rinus VeeKay (Ed Carpenter Racing), and Newgarden, all of whom were on blacks.

After the relative backmarkers were cleared by the effective front-runners, Rossi (blacks) had risen to fourth, from Ericsson (blacks) and Herta (reds), the latter of whom had rounded up team-mate Grosjean at Turn 5 on Lap 18.

Grosjean ran seventh, ahead of O’Ward, McLaughlin, VeeKay, and Dixon, with just O’Ward and McLaughlin on reds among that quintet.

Newgarden went down the inside of Rahal for second spot on Lap 23 at Turn 1, and he had a 6.2s lead over Rossi when Rosenqvist and Rahal took their second stops at the end of Lap 25.

He was still 5.5s up when the #2 Penske Chevrolet was called into the pits for a second time on Lap 28, while Rossi pressed on for one lap more.

The Andretti driver just held off Rosenqvist in the effective battle for second position as he came up to speed again, a task probably made easier by the Swede having to stretch his fuel load to ensure only one more stop was necessary.

When the pit stop cycle completed on Lap 31, it left Newgarden with a 4.5s margin over Rossi, ahead of Rosenqvist, Ericsson, Herta, Rahal, Grosjean, and McLaughlin, who had jumped O’Ward when they pitted together at the end of Lap 28.

O’Ward was thus ninth, from Christian Lundgaard (RLLR) and Dixon, with all of the aforementioned 11 drivers on blacks for the third stint.

Ericsson and Herta got by Rosenqvist on Laps 33 and 34 respectively, before Grosjean eased past a similarly fuel-saving Rahal for sixth position on Lap 35.

Rosenqvist and Rahal pitted for a final time at the end of Lap 40, with Newgarden and Rossi taking service one lap later.

They were separated by 5.2s on the way in, and slightly more once both had taken another set of primary tyres, while most of the rest of the field pitted within another lap.

Once that last cycle was done, it was Ericsson back in third despite slow service due to a snagged air hose, with Herta fourth after having to wipe dirt out of his eyes during his stop.

Grosjean got by Rosenqvist on Lap 46 before a big development on Lap 48, namely a Caution due to O’Ward stopping on the side of the track with an engine problem.

Newgarden had already seen his lead cut to 2.8s and it was next to nothing when the race restarted with five laps to go.

However, yellows waved again almost immediately due to Helio Castroneves (MSR) spinning and stalling on the infield exiting the final corner before he had even taken the green flag once more.

It was finally a three-lap dash to the finish and, as he had done minutes earlier, Newgarden pulled a gap of several tenths as they crossed the stripe.

Rossi came under attack, ceding second spot to Ericsson at Turn 1, then having to hold off team-mates Herta and Grosjean in a wild battle which saw the latter touch the grass and briefly drop behind Rosenqvist.

Newgarden skipped out to a 1.7s lead at the end of the restart lap, and was 2.2s to the good with a lap to go, before winning by an official margin of 3.3710s.

Ericsson and Rossi completed with podium, with Grosjean taking fourth after passing Herta, who had already used up most of his push-to-pass allocation, as they took the white flag.

Behind Herta in fifth, just 0.0893s covered sixth through eighth, Rosenqvist beating McLaughlin and Rahal to the finish line after the New Zealander had passed the latter on Lap 53.

Rounding out the top 10 were Dixon and Lundgaard, while De Francesco ended up 18th and Power 19th, which gave the Queenslander the opportunity to at least express his displeasure by banging into the side of Car #29 on the cool down lap.