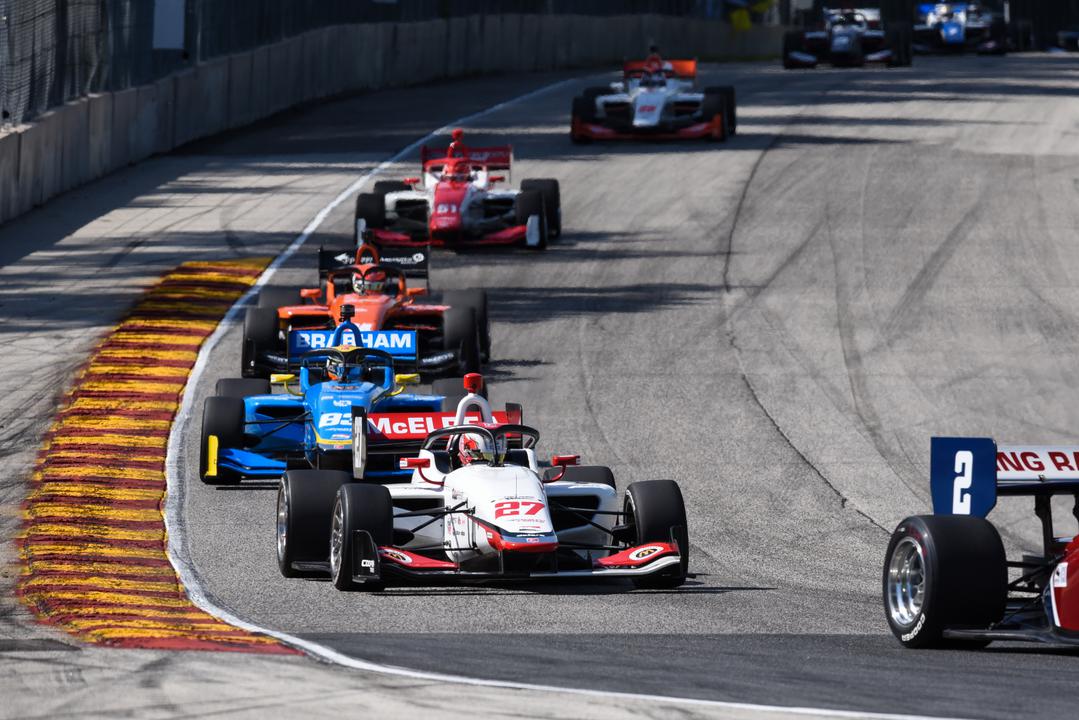 Hunter McElrea has finished third in a wild Indy Lights race at Road America which was won by Christian Rasmussen.

The New Zealander attacked pole-sitter Sting Ray Robb when the contest got underway, but got hung wide and briefly slipped back to fourth as Rasmussen took the lead.

McElrea regained a spot when Andretti Autosport team-mate Matt Brabham kicked up the dirt exiting Turn 7, before Ernie Francis Jnr (Force Indy) sprayed off at the next corner and triggered an early Caution.

Rasmussen led Robb and McElrea back to green on Lap 4 but the latter ran wide at Turn 1 and was overtaken again by Brabham at the next right-hander, then by Benjamin Pedersen (Global Racing Group w/ HMD Motorsports) before the lap was complete.

That was how they ran until an Antonio Serravalle (HMD Motorsports w/ Dale Coyne Racing) engine failure brought about a second Caution period.

A spectacular restart followed on Lap 9 when the top three, all Andretti team-mates, went three-wide down the main straight.

Brabham braked deep but ran wide at Turn 1 and emerged a net unchanged third position, although his defence of that spot caused Pedersen to take to the grass and the Dane was overtaken for fourth by McElrea.

Robb had wrested the lead from Rasmussen in the stoush, before the yellow flags flew again just moments later when Christian Bogle (HMD w/ DCR) went out of the race in remarkable fashion.

Bogle had launched off the kerb on the way to Turn 5, with the front of his car tearing down the catch fencing, although he was unhurt.

The repairs to the barriers meant the race was suspended before resuming after the IndyCar encounter, when the decisive lead change occurred.

Rasmussen rounded up Robb at Turn 1 and would not be headed again, while Brabham had been sent to the back of the field as punishment for blocking.

The race ran green thereafter, with Rasmussen prevailing by 2.4s, McElrea finishing third at 3.8s back from Robb after seeing off an attack from Linus Lundqvist, and Brabham getting back to sixth by the chequered flag.

In the championship, Lundqvist (HMD w/ DCR) continues to lead despite finishing the race in fourth, with a margin of 82 points over Robb.

Brabham occupies fifth spot on the table, two above McElrea, on the way to Mid-Ohio for Race 8 of the season on July 1-3.