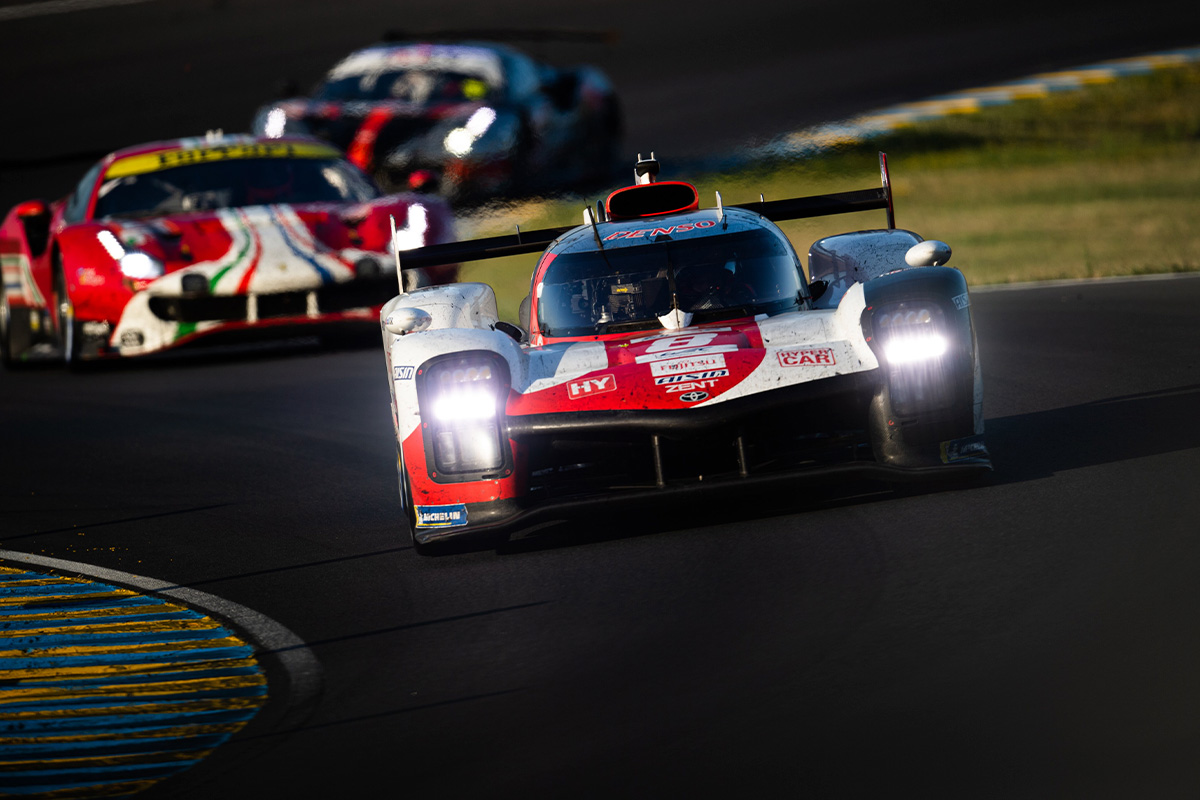 Brendon Hartley brought the #8 Toyota GR010 Hybrid across the line to claim victory in this year’s 24 Hours of Le Mans.

The Japanese manufacturer added to its tally at Circuit de la Sarthe making it five consecutive overall wins as it claimed a one-two result in the 90th edition of the French endurance classic.

Hartley earned his third outright win in the #8 Toyota he shares with Sebastien Buemi and Ryo Hirakawa.

The New Zealander took the chequered flag two minutes ahead of the sister #7 Toyota of Jose Maria Lopez, Kamui Kobayashi and Mike Conway.

Toyota’s race-winning #8 had a trouble-free 24 hours, while the #7 entry’s only blemish was an electric motor reset which caused it to momentarily stop on track while leading with four hours remaining.

That moment, coupled with a slow zone circumstance which favoured the #8 left the team cars separated by more than half a lap, which would not be overcome by the #7.

Of the non-hybrid Hypercar entries, Glickenhaus Racing finished on the overall podium with Ryan Briscoe bringing the #709 home four laps down.

Despite a spin into the barriers prior to the halfway mark, Glickenhaus’ #708 made it back up the order to fourth outright at the flag, 10 laps shy of the leader.

The last of the Hypercar entries, Alpine’s troubled run didn’t get any better on Sunday morning following a difficult night period.

Matthieu Vaxiviere crashed the #36 Alpine Hypercar while trying to overtake GT traffic in the Porsche Curves.

At that point the car was already 13 laps down and lost more time being recovered after the incident, but crucially, did rejoin the action.

Ferrari collected a double podium courtesy of AF Corse’s #51 and #52 Ferrari 488 GTEs, that by no means had a faultless run.

Porsche’s #92 car finished the race fourth in GTE-Pro after suffering a tyre blowout while leading with just over eight hours to go.

A quick repair job at the time meant the #92 Porsche ultimately crossed the line ahead of Shane van Gisbergen’s Riley Motorsport’s Ferrari.

As the only privateer crew in the class Riley Motorsports didn’t quite have the pace of the factory GTE-Pro squads, but a reliable run netted van Gisbergen, Felipe Fraga and Sam Bird a fifth place.

Corvette Racing lost both of its GTE-Pro contenders in a matter of minutes, the #63 retiring to the garage first with ‘mechanical damage’ before lunchtime on Sunday.

It’s sister car, the #64, was a scratching only minutes later when Alexander Sims crashed out of the GTE-Pro lead after being swiped by an LMP2 car on the Mulsanne Straight.

LMP2 was won by the #38 JOTA Oreca which dominated most of the race in the hands of Roberto Gonzalez, Antonio Felix Da Costa and Will Stevens.

Da Costa came to the fore after the first round of pit stops as he and his co-drivers controlled the LMP2 lead from that point forward.

Prema Orlen Team’s #9 Oreca was second, more than two minutes off the LMP2 class winner, as JOTA had two cars on the podium with its #28 car in third.

Pole-sitter in LMP2, the #31 WRT Oreca, crashed out during the 19th hour when Robin Frijns looped it into the barriers exiting Indianapolis, causing the race’s only proper Safety Car period.

TF Sport were victorious in GTE-Am with the #33 Aston Martin driven by Ben Keating, Henrique Chaves, and Marco Sorensen.

New Zealander Nick Cassidy crossed the line sixth in class in AF Corse’s #54 Ferrari, while the Matt Campbell-driven Porsche had a troubled run to finish 16th in GTE-Am.

The race’s two biggest incidents both claimed GTE-Am competitors during the run to the flag on Sunday.

With seven hours to go, Team Project 1’s #56 Porsche of Brendan Iribe snapped sideways under braking for the first Mulsanne chicane and smacked the barrier.

Meanwhile, the #60 Iron Lynx Ferrari of Claudio Schiavoni was punted into the fence exiting the Porsche Curves by a prototype with three hours left on the clock.

Of the 62 starters, the race saw a mere nine retirements.