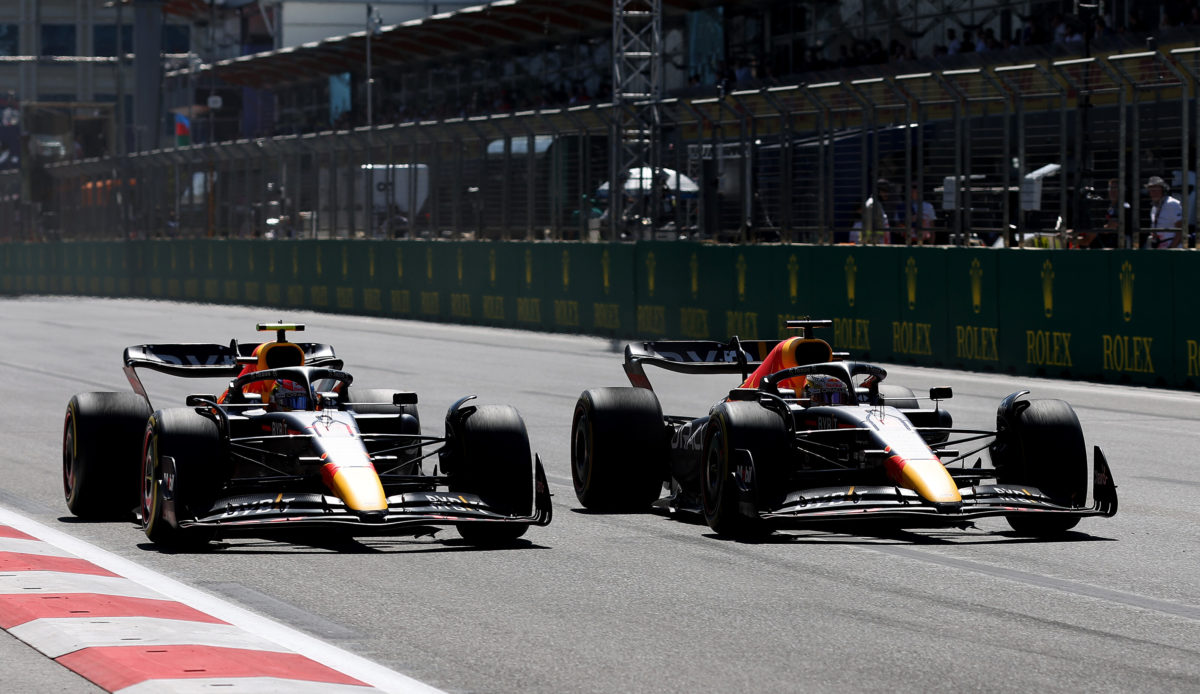 Red Bull capitalised on its rival’s misfortune with Sergio Perez second with the bonus point for fastest lap.

The race looked to have turned into something of a strategic battle before an engine failure eliminated Charles Leclerc from contention while leading the race.

That followed Sainz stopping on track with a reported hydraulic failure to trigger an early Virtual Safety Car.

As the race started, Perez gained the inside line into the first corner to seize the lead from Leclerc, who was challenged by Verstappen into Turn 2.

The Dutchman then had to go defensive as he came under pressure from Sainz into Turn 3 in an otherwise clean start to the race.

In the lead, Perez opened a 1.3s advantage on the opening lap, Verstappen just 0.7s away from Leclerc as he ran third.

Running second last, Nicholas Latifi picked up a 10-second stop-go penalty for an infringement prior to the race start when a crew member pushed his car back after the 15 second signal had been shown.

The Canadian took his medicine early, dropping to last by some distance.

Out front, Perez was edging away from Leclerc in second, who was doing all he could to stay clear of Verstappen.

The Red Bulls enjoyed a strong pace advantage down the long front straight, though the Ferrari driver was able to remain just far enough clear to remain safe in the early stages.

Leclerc was managing his pace well, allowed Verstappen to close through the middle part of the circuit where he had no opportunity to pass, then using his battery for the long front straight to remain clear.

On Lap 9, fourth-placed Sainz stopped at Turn 4, reporting a brake-by-wire failure back to the team which was later clarified as a hydraulic issue.

He stopped in the runoff area; the Virtual Safety Car deployed in response.

Ferrari took the opportunity to pit Leclerc, as did George Russell in the Mercedes, who had been running fifth prior to Sainz’s demise.

A number of others followed, Red Bull having headed out of the garage but neither driver actually taking into the lane.

Leclerc emerged in no-mans-land, with no drafting partner and more than 40-laps to run on the hard tyres that were fitted to his car.

Sebastian Vettel had a lunge on Esteban Ocon on Lap 14, passing the Alpine only to lock the wheels and skate long at Turn 3, dropping two places as he recovered.

Out front, the two Red Bull swapped positions as they began Lap 15, a clean move by Verstappen into the first corner.

Perez had dropped a second on the lap prior, while behind Leclerc was two seconds faster than the Mexican.

The instruction from the pit wall had been not to offer a defence, a logical call as the team looked to cover off the charging Ferrari.

Verstappen quickly stretched out to a 2.4s lead in a single lap, though still his pace was slower than that of Leclerc.

Perez headed to the pits on Lap 17, swapping to a set of hards after a lengthy 5.7s stop.

He rejoined in third, though only narrowly ahead of Russell who was in the slipstream as they approached Turn 3.

It was Verstappen’s turn to stop on Lap 19, the leader stationary for 3.5s to feed out in front of Perez as Leclerc took control of the race lead.

Leclerc’s race ended in engine failure on Lap 21, his car bellowing smoke as he rolled back into the pit lane.

Norris pitted as the Ferrari driver retired, releasing Ricciardo who’d been tucked up behind his team-mate through team orders.

However, he had Gasly for company, the Australian defending against the Scuderia AlphaTauri driver into Turn 1 and again into Turn 2 as they began Lap 22.

His efforts lasted just another lap, Ricciardo dropping a spot as they entered Turn 1 next time around.

He’d earlier warned his team that sitting behind Norris would leave him vulnerable to the Frenchman as they looked to move clear of Alonso after the pit sequence.

It didn’t pay dividends as Norris emerged 16th, four spots down on the Spaniard.

A technical issue then befell Guanyu Zhou, the Ferrari-powered Alfa Romeo Sauber forced out of the race with a ‘technical issue’.

With the two Ferraris out, it was advantage Verstappen who held a 6.5s advantage over Perez in second at the midway distance of the 51-lap race.

The race settled down until Lap 33, when Kevin Magnussen retired from the race, the fourth Ferrari-powered car to have stopped.

The Virtual Safety Car was deployed, Verstappen stopping from the lead and Perez from second, Red Bull double-stacking its duo.

They held a free stop over Russell in third, though Mercedes hauled the Brit in as well given he too hard an advantage over Gasly such that there was no risk to his position.

McLaren also took the opportunity, boxing Ricciardo to feed him out in eighth but with a tyre advantage over those around him.

Tsunoda had stopped early, making him easy pickings for Hamilton who moved by the Scuderia AlphaTauri at they began Lap 36.

The Japanese driver was carrying a broken rear wing, the DRS actuator seemingly missing and the flap split in half.

He was promptly shown the meatball flag, forcing him into the lane where the team taped up the rear wing before sending him back out.

With 10 laps remaining, Red Bull instructed Verstappen not to use DRS for the remaining laps.

In the final laps, Hamilton found himself closing on Gasly, while Norris reeled in Ricciardo who struggled for pace on the medium compound tyres.

The Mercedes driver made the move on Lap 44, easing up the inside at Turn 3 before quickly pulling away from the Scuderia AlphaTauri.

Inside the final 10 laps, Ricciardo lifted his pace, closing in on Alonso in seventh ahead as McLaren brokered a deal to allow Norris through if he could catch his team-mate.

The Alpine driver responded, logging a personal best on Lap 46 despite reporting over the radio that he was previously at his maximum.

It saw him inch slightly clear of Ricciardo behind, that battle the most intriguing in a race that had otherwise all but petered out.

The closing laps therefore did little but confirm Verstappen as the comfortable victor over Perez, with Russell logging another podium.

Hamilton equalled his best result of the season with fourth, then came Gasly, Vettel, Alonso, Ricciardo, Norris, and Ocon rounding out the top 10.

It was a strong race for Red Bull, while a disastrous weekend for Ferrari saw it lose significant ground in both the drivers’ and constructors’ championships.

At McLaren, Ricciardo also enjoyed an improved showing, matching team-mate Norris for the most part despite being on a theoretically slower strategy.

The team did employ team orders in the final laps, as it had done earlier in the race, mush to the displeasure of Norris who felt he could have gone faster.

The Brit showed his nose at Turn 1 as they began the final lap, the two McLaren running nose to tail as they completed the final circuit of the Baku City Circuit.