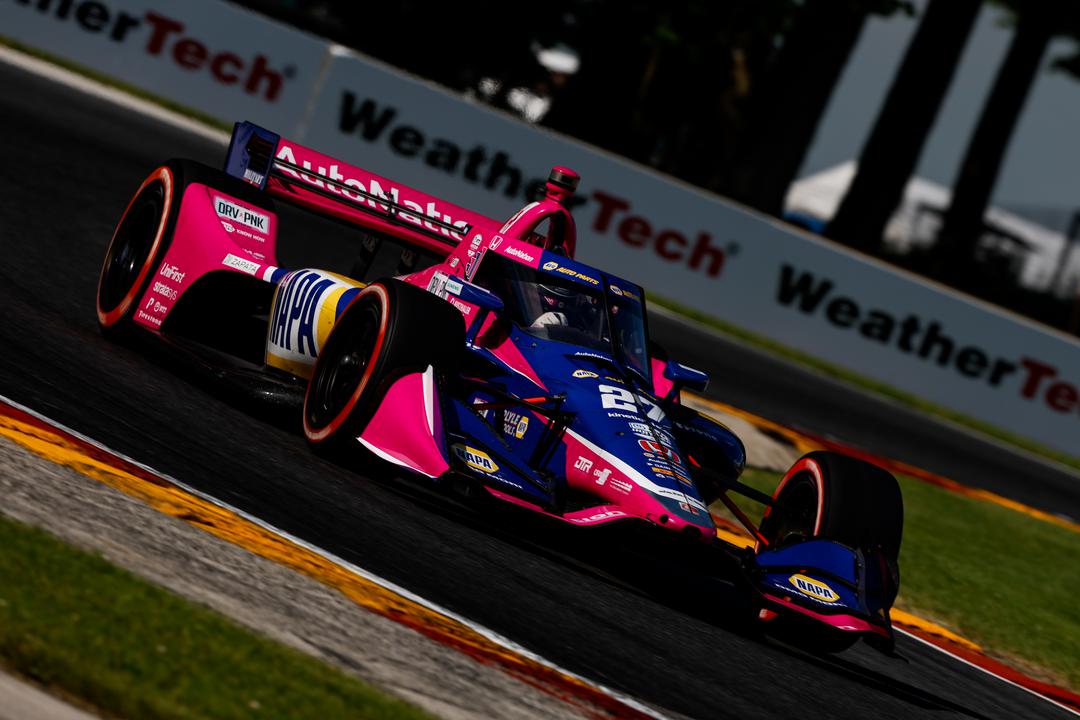 Alexander Rossi has just beaten Josef Newgarden to pole position for the Grand Prix at Road America while IndyCar series leader Will Power qualified deep in the field again.

Rossi scored a first pole in three years with a gap of 0.0715s over the sole Team Penske driver to make it through to the Fast Six at Elkhart Lake, while Newgarden’s team-mates Scott McLaughlin and Power qualified ninth and 15th, respectively.

The Fast Six, a longer than usual eight minutes due to the length of the Road America circuit, saw divergent tyre strategies.

Newgarden rolled out on blacks but came straight back in to switch to an already used set of alternates, while most of the rest had taken to the circuit for a single run on new primaries.

The two-time IndyCar champion was not done, but Newgarden came up just shy when he clocked a 1:44.9371s shortly before the chequered flag, and the man in the #27 Honda became the eighth different pole-sitter from a possible eight so far in 2022.

No one else was close, with Palou 0.4451s away even from the front row, although Ericsson was only 0.0418s slower than the Spaniard.

Earlier, rain threatened to spice up both of the first two rounds of qualifying, although the spits of precipitation never turned into a full-on shower.

Round 2 was red flagged before anyone had set a lap time when Callum Ilott (Juncos Hollinger Racing) got unsettled on the bumps and ultimately ran off, into the barrier at the final corner.

The session resumed with just under six minutes remaining, time enough for two flying laps, and everyone who headed out did so on red tyres.

Romain Grosjean (Andretti) was only left with enough time for one flyer once his exit from the pits was delayed due to a problem selecting a gear in Car #28.

The Frenchman broke into a slide off the final corner of the race track to start that lap and came up just 0.0810s shy of pushing team-mate Rossi out of the top six when he got back to the timing line to set a 1:45.1543s.

Grosjean will thus start seventh, with Felix Rosenqvist (McLaren SP) alongside given the Swede was 0.0764s slower again.

Back in Group 1 of Round 1 of qualifying, Grosjean led an all-Andretti top three with a 1:44.8840s, ahead of Rossi and Herta, while last-start winner Power did not make it into the top six.

The Queenslander is set to start 15th, having looked like clawing his way back above the cut until he got crossed up off Canada Corner and could only improve to a 1:45.4227s.

Neither Rinus VeeKay (Ed Carpenter Racing) nor Takuma Sato (Dale Coyne Racing w/ RWR) got through either, despite the former using new reds on both runs, and will start 17th and 19th respectively.

In Group 2, Newgarden was quickest on a 1:44.5552s and team-mate McLaughlin was last into the top six on a 1:45.5678s, having already done enough when he had a big sideways moment at Canada Corner.

David Malukas (DCR w/ HMD Motorsports) was only 0.0339s slower in seventh, and hence 14th on the grid, while Helio Castroneves (MSR) could only qualify 16th all-old and Jimmie Johnson (Ganassi) is set to start 26th after setting a time of 1:47.3134s.

Simona De Silvestro (Paretta Autosport) will launch from 27th after being slowest in Group 2 on a 1:48.1033s, in a session in which she had to serve a drive-through for pit lane speeding.

Stan Sport’s live and ad-free coverage resumes tomorrow morning at 02:30 AEST, with a green flag in the 55-lapper scheduled for 02:55 AEST.